Don't worry. It's only temporary.

Share All sharing options for: The Wrigley Field Bleacher Wall... Without Ivy

BCB reader mph3 was at the season-ticket relocation session Thursday. While there, he -- and presumably, everyone else there -- got to see something that hasn't been seen in decades, the brick wall of the left-field bleachers at Wrigley Field without ivy. Now you can see it, too, in the photo shown above.

This isn't cause for concern, nor is it any sort of construction related to the Wrigley Field renovation project. The Cubs tell me that it's simple tuckpointing maintenance, and something they have done in the past. You can see by looking at the wall that some of the brickwork is in really poor condition, and this sort of maintenance is quite necessary.

It's a fascinating look at something that, for most, has not been seen since the late 1930s, since the brick wall was originally constructed. Here's a photo of the ivy being planted in 1938, and here's a photo of the same wall in 1970, when the basket was first being installed. You can see that the ivy wasn't nearly as thick even after more than 30 years of growth.

Now, more than 75 years later, the wall needs work. This will help preserve it -- and the ivy -- for many years to come.

Here's another view of the wall (also taken by mph3) as it appeared Thursday, December 5 (click to embiggen): 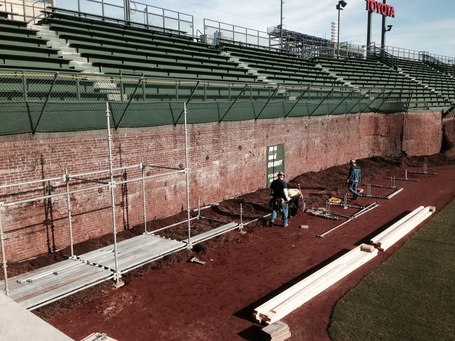