At last, I've seen the Cubs win a game in 2013. Three Cubs home runs and some solid pitching gave them a blowout win over the visitors from San Diego.

MESA, Arizona -- Spring training results and all that, but it was sure nice to see the Cubs bring out the power bats and defeat the Padres 9-3 at HoHoKam Sunday afternoon.

Before I get to the home runs, though, let's give some kudos to Cubs pitching, which was quite good Sunday afternoon. Scott Feldman was much, much better than his last time out; he threw three innings without walking anyone and might have gotten out unscathed if not for an error by Alberto Gonzalez with nobody out and a runner on first base in the third inning. Gonzalez had made two slick infielding plays prior to that and maybe was a little overconfident in booting Jaff Decker's potential double-play ball. Feldman hit the next hitter on a 1-2 count and Mark Kotsay smacked a two-run double down the right-field line. 2-0 Padres, and it seemed like pretty much every other game I'd seen so far this spring.

Jason Marquis, the ex-Cub, breezed through his four-inning outing, giving up just a pair of singles (and he was the runner on first for San Diego in that third inning, having singled himself). Tim Stauffer relieved him and threw a 1-2-3 fifth. Looked like same old, same old.

But Travis Wood was holding Padres hitters down. He threw four innings and gave up just one hit, a single that just eluded Darwin Barney into center field in the sixth. Wood struck out six -- and this was before Padres manager Bud Black pulled all the major league players out of the lineup. Sure, not all the Padres' best came to Mesa (Chase Headley and Carlos Quentin were absent), but Wood struck out Kotsay, Padres catcher John Baker and Travis Buck, among others. A real nice outing and Wood has been excellent this spring, posting a 3.00 ERA in 12 innings, allowing seven hits, four walks and striking out 11. That's a good sign for a rotation that could use it.

The Cubs teed off on Stauffer in the sixth, capped by a two-run homer by Dioner Navarro, who's also looking good this spring. The Cubs still hope Welington Castillo will seize the starting job. But Navarro is a solid backup, both offensively and defensively; he threw out Jedd Gyorko trying to steal.

And seriously. If your last name were "Gyorko", would you pronounce it "Jerko"? That's how PA announcer Tim Sheridan said it. Kind of strange, if you ask me.

The Cubs put the game away in the eighth inning when the future of the club smashed a pair of homers; Jorge Soler hit his first spring homer, a long blast to left-center, and Christian Villanueva his third, with a runner on base, to cap a five-run rally and give the Cubs their second-highest run total for any game this spring, and their most since the first game this spring, more than two weeks ago.

Carlos Marmol threw an uneventful inning. That's newsworthy, because he has struggled so far this spring. Michael Bowden might have had the same, if Edwin Maysonet hadn't overrun a catchable popup down the left-field line, which dropped for a gift double. Yasmani Grandal, who is under PED suspension once the season starts but can play during spring training, drove in the final run of the game.

It was nice to meet BCBers on the lawn this weekend from Michigan, Texas and Las Vegas. Had a discussion with one of them about the WGN-TV issue, which is a complicated one for the team. All the people I met are among those who became Cubs fans because they saw all the games on WGN; I can understand the feelings of people like that, accustomed to seeing games on a single cable channel. On the other hand, you can understand the desire of the Cubs to get as many dollars as they can from their new TV deal, given the multibillion-dollar deals of some of their competitors. So much of the Cubs' identity comes from the exposure for six-plus decades on WGN; that makes this a difficult choice.

Finally, via Twitter earlier today I promised photos of the finals of the bunting tournament, won for the second straight year by David DeJesus, this time over Nate the Video Guy, seen here: 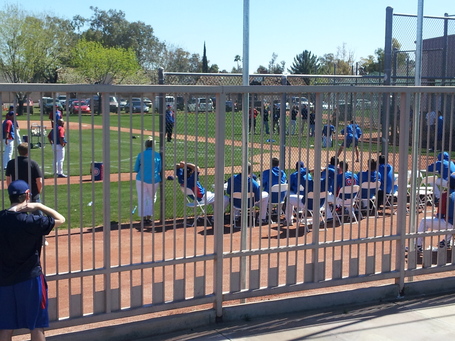 Here's DeJesus celebrating his win, in front of the entire team. (Note also the food spread behind the player seating area!) 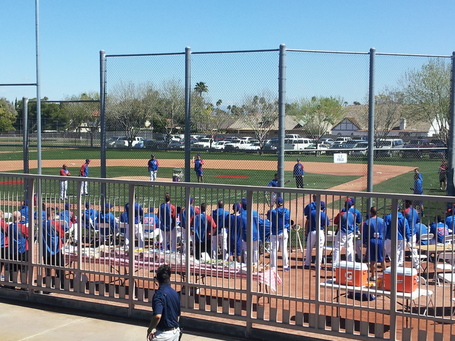 Attendance watch: Sunday's crowd, on an absolutely perfect day, was 8,626; the season total for 10 dates is 67,135, an average of 6,714. Monday, the Cubs travel to Talking Stick to take on the Diamondbacks; Jeff Samardzija will go for the Cubs against Arizona's Trevor Cahill.