Are you excited about Cubs prospects? If you haven't been, you should be after Friday's big win over Team Japan, played in front of a Japanese media horde nearly as large as the crowd in the stands.

MESA, Arizona -- There were drums, and whistles, and many enthusiastic fans of Team Japan, likely headed to San Francisco to see their team try to win the World Baseball Classic for the third straight time... not to mention what looked like a couple hundred members of the Japanese media chronicling every moment of Friday afternoon's game at HoHoKam Park.

Japan might yet win the WBC, but Friday afternoon, the Cubs had the upper hand in a 7-5 walkoff win, thanks primarily to Javier Baez. Perhaps someday Baez will represent Puerto Rico or the USA in a future WBC. Friday, he smacked two home runs, including the game-winner after Christian Villanueva had led off the ninth with a double that bounced off the center-field wall off Takeru Imamura, a 21-year-old righthander who pitched in 2012 for the Hiroshima Carp.

Baez's first home run was the more impressive blast; with one out in the seventh inning and the Cubs trailing 5-3, he blasted one into the parking lot on the fly, which means it had to leave the premises and cross the road between the ballpark and the lot. I estimate it went at least 430 feet, by far the longest home run I've seen hit by anyone this spring. That one was off Kenji Otonari, who made 25 starts for the Fukuoka Softbank Hawks in 2012, posting a 2.03 ERA. Otonari allowed just nine home runs in 177⅓ innings.

It was a most impressive day for Baez, who also drew a walk in the first inning off Japanese starter Tetsuya Utsumi. Last year for the Tokyo Yomiuri Giants, Utsumi had a 1.98 ERA and 1.145 WHIP in 186 innings, issuing just 40 walks.

Baez's walk helped lead to a three-run first for the Cubs off Utsumi; Welington Castillo hit a ground-rule double, moving Baez to third. That was followed by a sac fly by Alfonso Soriano. Dave Sappelt drove in Castillo with another double, and Josh Vitters lined a single up the middle to complete the scoring.

Travis Wood moved through the first inning with no issues, but then got in trouble in the second and third; Japan's Sho Nakata (24 homers in NPB in 2012) hit a two-run blast in the second, and Hayato Sakamoto (14 HR in NPB in 2012 at age 23) hit a three-run homer after the third inning started with a Baez throwing error.

OK, so Baez isn't perfect. But Cubs relievers kept Japan in check after Wood was lifted with two out in the fifth, throwing 4⅓ shutout innings and giving up just four hits. Japan got a runner to third in the ninth, but Villanueva confidently took a grounder on a contact play with one out and threw the runner out trying to score. Jensen Lewis, the fifth Cubs pitcher, got Kazuo Matsui to ground to Dan Vogelbach at first base to end the inning, setting up Baez's heroics.

Speaking of Vogelbach, he looked fine at first base. He handled nine chances flawlessly, including the play above, also a foul popup, and the final out of a double play. As some mentioned in Thursday's game recap, he does resemble Matt Stairs (although he's quite a bit taller). Vogelbach was 1-for-4, driving in the tying run with an eighth-inning single. It was a bit surprising when he was sacrificed to second, and then not pulled for a pinch-runner. It may be that the Cubs didn't have anyone else around who could play first base. Vogelbach was sent home on an Alberto Gonzalez single by third-base coach (and this year's Iowa manager) Marty Pevey.

That was a really, really strange send. Vogelbach runs... well, about like you'd expect for a man his size. He was out by 30 feet. There were two out; I could see a send like that in the bottom of the ninth, but not in the last of the eighth. But the bottom line on Vogelbach, in my view: if he can keep the weight off and stay in shape, he can probably become a competent big-league first baseman.

Anyway, it all ended well when Baez yanked his second homer to left-center, maybe 50 feet to my left on the berm; unlike the first homer, this one was a line-drive shot that at first I figured had won the game as a gap double, but it kept rising as it headed through the outfield and skidded across the berm as Cubs spilled out of the first-base dugout for their first walkoff win of the spring.

Of course, this game doesn't count in the Cactus League standings, nor does the announced attendance of 2,915, which was a pretty good showing considering neither the Cubs nor the WBC did much promoting of the game. The crowd seemed about evenly split between Cubs fans and Japanese fans. Neither of the Cubs' Japanese pitchers -- Kyuji Fujikawa nor Hisanori Takahashi (but see below) -- pitched in this game, though Fujikawa was given the honor of taking out the lineup card, and he bowed to his Japanese counterpart as they exchanged cards with each other and the umpires. After the game, the entire Japanese team came out of the dugout and bowed to their fans, most of whom had congregated there. Nice touch. I wish them well in the WBC.

Here are some more photos of the pregame festivities and batting practice at Mesa (the photo at the top of this post is of the media scrum -- click on any of the photos to open a larger version in a new browser window or tab): 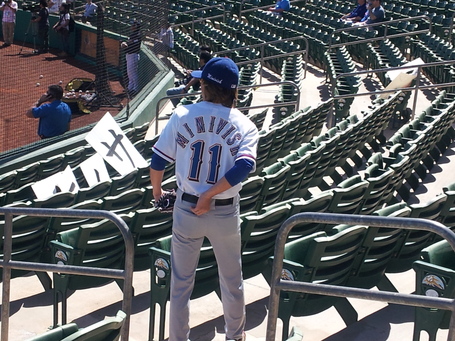 This Japanese fan looks exactly like Yu Darvish and calls himself "Minivish". 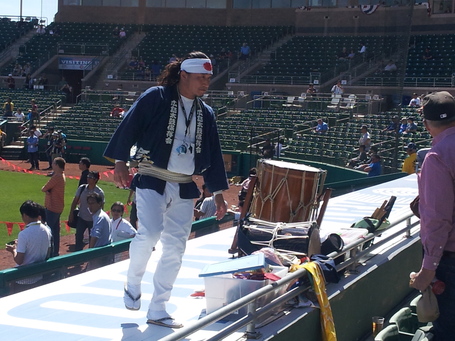 Drummers set up just behind the visitors' dugout and drummed throughout the game (glad I wasn't sitting next to them!) 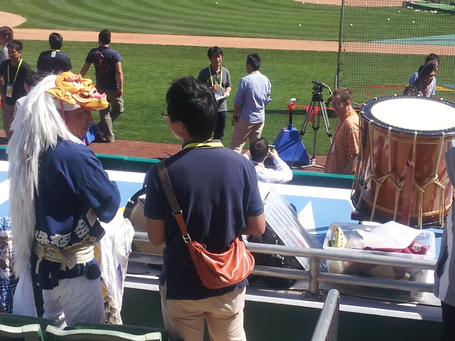 Another view of the drum and another drummer, talking to one of the many members of the Japanese media. 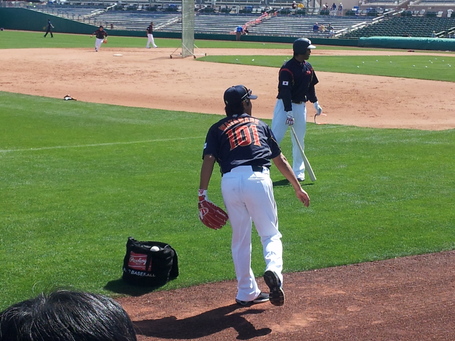 Pretty big rosters over there if someone's wearing No. 101! 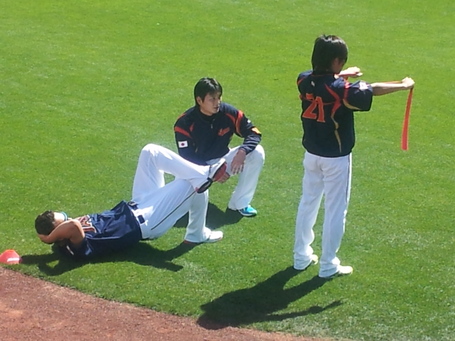 There were a number of workouts like this going on during BP, in addition to the standard hitting practice, much different from what MLB teams do.

Oh, yes. The other Cubs split squad got crushed by the White Sox 15-3. Perhaps that's enough said about that game.

Saturday, the Cubs' split-squad weekend continues. Jeff Samardzija will go for the Cubs in Las Vegas against the Rangers' Nick Tepesch, and Hisanori Takahashi starts for the Cubs in Mesa against the Royals' Bruce Chen; according to the Royals website, Chen will become the first Royals pitcher to bat this spring, so the DH will not be used in Mesa Saturday. Anthony Rizzo is expected to play in the Mesa game.