The Cubs got good pitching and timely hitting Thursday night. We all hope this happens more often during the 2013 season.

PEORIA, Arizona -- The Cubs' first night game of 2013 began with one of those brilliant Arizona desert sunsets, as you can see in the photo at the top of this post.

It continued with a solid pitching performance by Opening Day starter Jeff Samardzija, who added to the festivities by driving in two runs with a single and his second home run of the spring.

Samardzija did give up nine hits in six innings, and the Mariners, who had won six in a row before Thursday night, hit him particularly hard in the second and third innings, when they scored all three of their four runs. One of those runs was unearned due to an error by Alberto Gonzalez. It looked like Seattle might score even more runs, but Javier Baez started a slick-looking double play to end the third inning.

And after that, Samardzija settled down. He did allow one more run, a home run by Justin Smoak, but also struck out the side in the fifth inning. He had seven Ks in all and no walks, and though "quality start" isn't the most useful of statistics, he did qualify for one. This is the kind of start that the Cubs are going to have to get from all of their starters in order to win games this year -- or better, of course, but even a start like this keeps your team in the game. When Samardzija batted for himself in the seventh and singled to make the score 4-3, it was part of a rally that tied the game. The Cubs took the lead for good in the eighth when Brad Nelson hit a two-run homer past the bullpens in right field.

Alfonso Soriano also homered for the Cubs, his fourth of the spring. The final run was driven in by Ty Wright, who is beginning his seventh year with the organization without ever receiving as much as consideration for a big-league callup. He's appeared in at least one spring-training game for the team every year since 2008; looking at his minor-league numbers, he appears to be the very definition of "organizational guy". He went 1-for-2 Thursday night -- that was the first time any pitcher had retired him in a big-league spring-training game this year (he's 4-for-5).

Guys like that don't get much recognition. So I thought I'd give him some.

The Cubs bullpen did its job, throwing three scoreless innings. Carlos Marmol even got out of an inning without any real trouble, though he did issue his traditional leadoff walk. Kyuji Fujikawa was called upon to save the game, ald though he gave up two line-drive singles, he got Michael Saunders on a nice bender for a called third strike to end the game. I found it interesting that three of the four relievers who will likely see the most seventh, eighth and ninth inning duty for the Cubs this year (Shawn Camp, the other) all appeared in this game, but with Marmol and Fujikawa swapping the innings they are supposedly slated for. Many of the Mariners' regulars were still in the game, too.

Should we read anything into that? Probably not. Still, an interesting choice.

The Cubs will do the quick-turnaround thing Friday and head to Maryvale to face tbe Brewers in an afternoon contest that will be televised by WGN. Carlos Villanueva gets the start for the Cubs against Milwaukee's Yovani Gallardo.

Here's one more view of the spectacular sunset over Peoria, Arizona, Thursday night (click on it to open a larger version in a new browser window or tab): 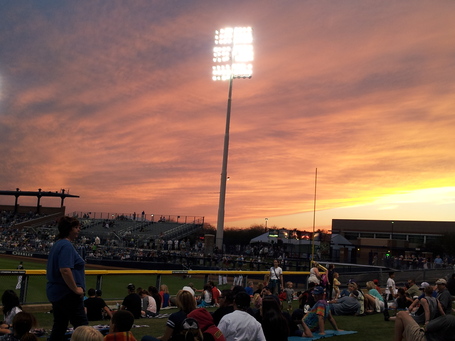