Everyone's got an opinion about Wrigley renovations. Dive in as I deconstruct one of them, from an architecture writer.

Share All sharing options for: Wrigley Renovation: An Architecture Critic Weighs In

So as we go along the Wrigley Field renovation road, it's likely that we'll hear from just about everyone on this topic. Local and national sportswriters and broadcasters. You. Me. And now, Cheryl Kent, who has written this Tribune article looking at the Cubs' plans from an architectural point of view.

Okay, that's not unreasonable, especially because parts of Wrigley Field are landmarked and the local landmarks commission is going to have its say (as well as the possibility, written about last week in this very StoryStream, that Wrigley could get National Historic Landmark designation).

Kent writes as a Cubs fan -- clearly, she's been to games at Wrigley and loves the team and the place -- but I want to focus on two specific parts of her article. First:

Right there is a very specific list of things that are supposed to be kept during any Wrigley renovation.

And there, in my view, is where Kent's premise fails. Because Wrigley Field, for all its quirks and charms and age and things you love and hate, is most certainly not "intact". In fact, there's now almost nothing left from the original edifice constructed in 1914. In fact, the last part of any "original" construction was demolished in 2005 -- that was the original outside bleacher walls, which you can see in this 1917 photo: 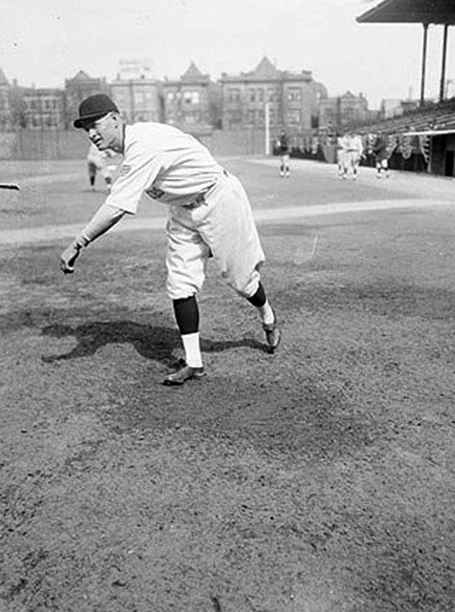 And here's the left field side of the wall, also in 1917 (you can see the two buildings on Waveland that still stand today, 96 years later -- the back wall is at the far right of the photo); both of those walls survived until the bleacher expansion in 2005-06: 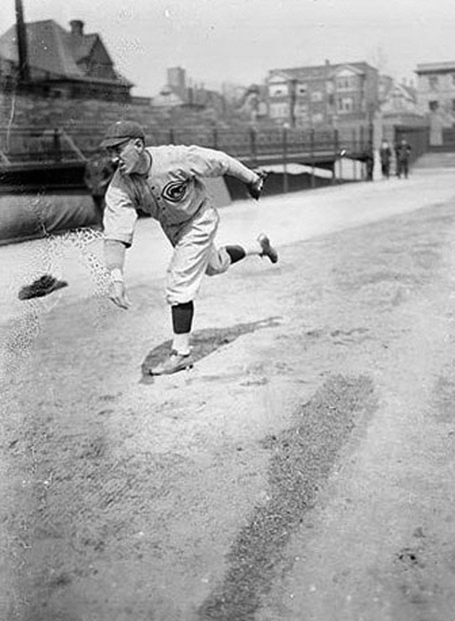 Now what else do you see in those photos? In the top one, you see a roof. That's because there was no upper deck in 1917; that was added in stages in the 1920s. In the bottom one, you see ... a fence. That's right, there was a low fence, not a brick wall, behind the main grandstand until the mid-1930s. There was also wrought iron on the outside of the park, not chain-link fencing as there is now; there weren't the concrete panels still on the sides of the outer wall (those were added in 1958); the marquee wasn't red until 1965; the dugouts were rebuilt in the 1970s, the suites added and press box moved to the upper deck in 1989. I wrote about these and other changes to Wrigley over the years last week.

Moreover, you can also see in those photos the seating down the foul lines -- which was originally built facing the outfield. In 1968-69, the seats down the line were curved to face the plate, further changing the original structure, and in so doing, actually reducing seating capacity by about 5,000. The record paid crowd at Wrigley is 46,572, set May 18, 1947, the day Jackie Robinson made his first appearance there; that will never be broken, as in the late 1970s the Chicago Fire Department set maximum occupancy numbers for each section. You can see these signs near the customer service window on the main concourse; current seating capacity is 41,159, and the biggest crowds you'll see are around 42,000, allowing for 1,000 or so in standing room.

My point is that Wrigley Field is a living, changing entity and always has been. Even the "perimeter walls" that are supposed to be preseved haven't been; the outer walls behind the bleachers on Waveland and Sheffield date only from 2006. So when Kent writes:

Wrigley has been "fundamentally damaged" dozens of times in the last 99 years. It doesn't come close to resembling the ballpark that was built in 1914; it doesn't look anything like it did when the upper deck opened in the 1920s; and it doesn't even look like the Wrigley with the original brick-and-ivy bleachers that were built in 1937.

Kent misses a point that the Cubs made at the convention when they revealed the concept drawings of what Wrigley might look like after construction is done: they term this a "restoration" rather than "renovation". Look at the image on the top of this post; the Cubs plan to restore the wrought-iron that was on the outside of the park in the 1920s and 1930s, since removed and replaced with chain-link fence. The green awnings shown in that picture resemble the ticket booths that were originally in front of the main entrance until those, too, were removed (sometime in the 1960s, I believe). Somewhere, I have a photo of the exterior of Wrigley that was taken during the 1929 World Series. If I can find it, I'll scan it and do another post; it shows the wrought-iron very well.

Here's another point from Kent's article:

That's not "neglected" -- it was reported last week, and I covered it in this post from last Thursday.

The most contentious point of the proposal appears to be the desire for the Cubs to have a Jumbotron, which I wrote about Monday and last week and last month. While that would obviously be a significant change, the ballpark has had many such changes over the years; even though certain parts are landmarked, it's not anywhere close to the baseball stadium that was first built at Clark and Addison 99 years ago. In fact, what the Cubs plan to do will make it look more like the version of Wrigley that existed when the Cubs were winning pennants in the 1920s and 1930s, than at any time since.

Since I've brought up the Jumbotron again, I thought I'd attach the poll that I should have posted with the previous Jumbotron article in this series. Vote in the poll, but please don't limit your comments on this to the video board only.