We have all kinds of wild and wacky weather in Chicago. Monday night, a thick fog bank was the story of the game.

Share All sharing options for: Reds 6, Cubs 2: All Fogged Up

Surprisingly enough, I could see almost every play in the infield from my seat in the left-field bleachers during the early innings of the Cubs' 6-2 loss to the Reds Monday night.

That statement would ordinarily not have to be made in the post-mortem to a major-league baseball game, but an extremely thick fog blew off Lake Michigan Monday evening and covered most of the ballpark during the early innings. The same fog forced a delay of more than an hour during another game just eight miles south, between the White Sox and Blue Jays at the Cell. Truth be told, the umpires probably should have stopped the game for a while around the second or third inning. The fielders were starting to have trouble, and the Cubs got their first hit -- a single by pitcher Scott Feldman in the bottom of the third -- when Reds center fielder Shin-Soo Choo completely misjudged a line drive that on a normal day would have been an easy out.

Speaking of that fog delay at the Cell, the Wrigley scoreboard operators -- who usually put an "R" in the inning where a game is delayed -- came up with a different letter to denote the cause of the Sox/Jays delay: 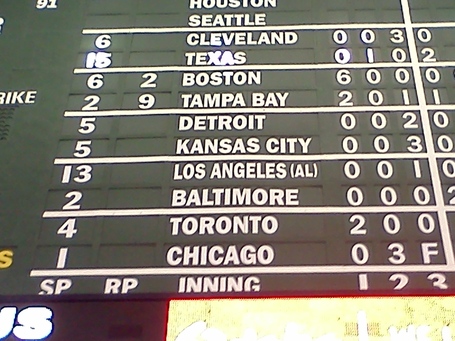 Please keep your comments on the photo clean!

In the first four innings, in fact, the fielders had little trouble because only four balls were hit out of the infield -- Feldman's single, one fly ball to left field by each team, and... oh, yes, Brandon Phillips' grand slam off Feldman in the top of the third that essentially ended any chance the Cubs might have thought they had to win this game.

Feldman didn't pitch too badly, and after the slam gave up just one single, to Jack Hannahan; he was erased on a double play. But the Reds' offense was all Phillips; he drove in all six Cincinnati runs. According to this article, the record for such things is nine, set by Mike Greenwell of the Red Sox in 1996.

The fog finally began to lift in the middle innings, helping visibility, but not the Cubs' offense. They managed a run in the sixth thanks to a Phillips throwing error, and another one in the ninth on a Starlin Castro double. Castro, thanks to that hit, is now 3-for-his-last-42. I'm still not understanding why Dale Sveum didn't give him Monday night off, against a tough righthander in Homer Bailey. I hope it isn't because of Castro's consecutive-game playing streak, which stands at 257 games. Those things don't really mean much in modern baseball, and if you really want to keep it going, sit him from the starting lineup and put him in the game defensively in the late innings. (Incidentally, if you are wondering, the longest active consecutive-game streak is 405, held by Prince Fielder.) Castro's not likely to sit Tuesday night, either, since the Reds will start lefthander Tony Cingrani.

Castro's double was one of three for the Cubs Monday night; that gives them 131 for the season, still leading the National League, and still on pace to break the team record of 340 (current pace: 348).

As I wrote in the preview to this game, the Cubs have simply not been able to defeat the Reds with any degree of regularity for the last four seasons. Their record against Cincinnati in that time is 17-43 (9-21 at Wrigley Field). Thus, though the fog is forecast to be gone Tuesday evening, I don't expect that to lift the Cubs' bats. I don't expect them to win more than one game in this series; I'd be pleasantly surprised with more.

The loss and the Brewers' win over the Marlins dropped the Cubs into a last-place tie with Milwaukee, the first time they've been in fifth place since May 26. The 15-game deficit from first place is the Cubs' biggest of the season.

I wish I had better news, but coming out of the fog is about it for today.