The Cubs decided they'd emulate the Blackhawks and play a very long game. They emulated the Hawks again by winning. Now let's see if, soon, they can emulate the championships, too.

Share All sharing options for: Cubs 6, Reds 5: It's All The Blackhawks' Fault

The Cubs must have figured, "If the Blackhawks can go this long and win, so can we!"

Five hours and seven minutes of mostly-entertaining baseball later, they were right; Julio Borbon, the last position player on Dale Sveum's bench, sliced a line-drive single into left field, scoring Starlin Castro with the winning run. The Cubs' 6-5, 14-inning win over the Reds broke a 12-game losing streak to Cincinnati at Wrigley Field, the longest such streak to one team in franchise history. (Let's hope that one is never broken.)

Len and JD, singing the "14th-Inning Stretch", said, "We'll win this one in triple overtime," and it just about felt that way. Before I get into the details of this long march from afternoon into evening (so long that the Wrigley scoreboard operators took down the signs that said "NITE GAME" and began posting scores for games that began at 6:05 Chicago time), let me give some praise to the Cubs' justifiably-maligned bullpen.

The pen, which has been mostly awful all year, threw eight innings Thursday afternoon, allowed three singles and a walk and struck out 13. (Yes, thirteen, that's not a typo.) Every single member of the pen contributed -- except the just-recalled Brooks Raley, who was warming up when Borbon's single won it. Raley, who's been stretched out as a starter, could have thrown multiple innings.

For once, I have no complaint with the way Sveum used his bullpen -- well done today, all the way around. Joey Votto and Brandon Phillips each struck out three times, and Dusty Baker might have miscalculated when he left pinch-hitter Jack Hannahan stay in the game at third base, removing Todd Frazier, who hits Cubs pitching all over the yard in both Cincinnati and Chicago. Hannahan also struck out three times.

A very long time before all that, on a sunny but windy day when the temperature never got out of the 60s at Wrigley, the game began the way most Cubs/Reds games have begun this year. The Cubs took an early lead, only to cough it up in the second inning when Jeff Samardzija allowed five hits and two runs. It might have been worse, except for a line drive hit right at Anthony Rizzo that was turned into a double play. Shark once again had a game filled with long counts; he was lucky to make it through six innings, and allowed four walks as well as 10 hits and five runs.

But the Cubs hung in there; David DeJesus homered in the fifth to make it 4-3 Reds, and after the fifth run scored for Cincinnati in the sixth, Nate Schierholtz hit his second triple of the game and scored on a Luis Valbuena groundout to make it 5-4. That made me go and look up who was the last Cubs player to hit two triples in a game at Wrigley Field. I didn't have to look too far -- DeJesus did it last year. Starlin Castro did it in 2011, and Mike Fontenot in 2010. Before that, you have to go back to 1988, when it was done by Ryne Sandberg.

The eighth inning could have been decisive, if Alfonso Soriano hadn't taken a dumb risk and tried to stretch a clean single to left-center into a double. He was thrown out easily. After Schierholtz then walked, singles by Luis Valbuena and Darwin Barney scored the tying run. Of course, we'll never know if the Cubs would have actually scored more runs if Soriano doesn't make that play, but it seems likely they could have.

Castro nearly won the game for the Cubs in the bottom of the ninth; his blast to left-center would have left the yard on most days, but not Thursday with the wind blowing in at 20-plus miles per hour. Castro settled for a double, but neither Soriano nor Schierholtz could drive him in, setting up overtime extra innings, and eventually, Borbon's heroics in the bottom of the 14th.

Truth be told, the Blackhawks won their game in less actual time than the Cubs did; the winning goal in Game 1 richocheted into the net at six seconds after midnight (and I know this because of this sad story), about four hours and 40 minutes after the faceoff; that's almost 30 minutes shorter than the Cubs and Reds took to get their 14 innings in Thursday afternoon. At least one of the Blackhawks took in Thursday's game:

Maybe 2,000 fans stayed till the end of this marathon (I have no idea if Stalberg stuck around); many of the people sitting in the shade made their way to the right-field corner early on, to sit in some of the few non-bleacher seats that were in the sun. This photo was taken in the bottom of the first inning: 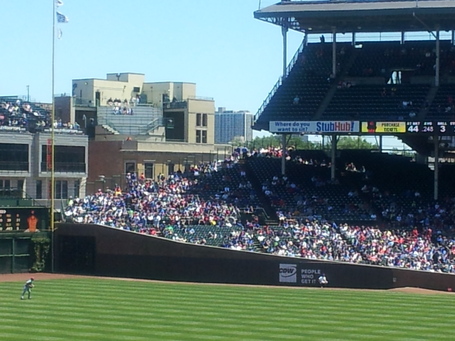 The games at Wrigley this year haven't always been fun, especially with all the losing. This one not only had high entertainment value, but the Cubs also won the game. A fine, if very long, afternoon, before the Cubs head to New York and St. Louis for a one-week road trip.