The Cubs got three solo homers for all their runs, and fine pitching from two pitchers who might both be in other uniforms by the end of next month.

In a game that lasted 35 minutes less than the rain delay Friday afternoon, the Cubs used three solo home runs to defeat their former division rivals, now an interleague opponent, the Houston Astros, 3-1 behind outstanding pitching by Matt Garza.

Kevin Gregg posted his 11th save, and it's a sign of what this Cubs team is that neither one of those pitchers might be on this staff after July 31. In fact, with the Tigers designating Jose Valverde for assignment Friday, there's already speculation Gregg could be headed to Detroit.

You can have all kinds of fun with that, but first, have a look at what it looked like outside Wrigley Field just before the scheduled game time of 1:20 CT: 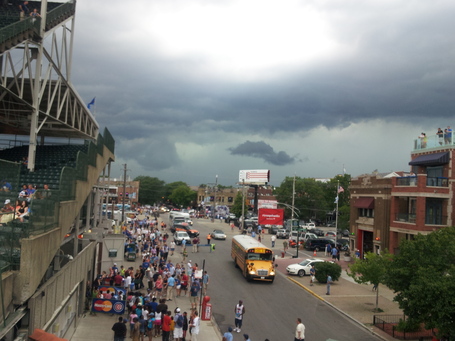 That's a pretty nasty-looking storm; the worst it did in the Wrigley area was rain hard, produce a lot of wind, and delay the game three hours and 18 minutes. The wind, which was blowing out strongly before the storm came through, pretty much died once the game started; any wind left was blowing in off Lake Michigan, a frequent occurrence in this weird-weather spring and early summer.

A surprisingly large portion of the crowd stuck around through the rain delay, and there were quite a few more Astros fans than might have been expected, one of whom I spotted wearing a 90's-vintage Astros jersey with "DESHAIES 43" on the back, perhaps hoping to meet the now-Cubs broadcaster.

Garza, meanwhile, was trying to make sure the game would go quickly. Perhaps he had dinner plans. He breezed through the first six innings, allowing just two hits and a walk, and another runner on a throwing error by Starlin Castro; that runner was erased on a double play. The only run allowed by Garza was on a solo homer by Chris Carter; later in that inning, another runner reached base when Garza made yet another bad throw on a bunt. I just can't fathom how Garza can't make these throws, which most other pitchers make as a matter of routine. The runner, Justin Maxwell, could have easily made second base, but wasn't paying attention as the ball wound up near the tarp in right field. Garza got out of that one with a double play, too.

Meanwhile, Cubs hitters were sending baseballs out of the yard. Anthony Rizzo crushed a ball onto Sheffield for his first homer since May 18; Darwin Barney also homered, as did Scott Hairston. Barney went 3-for-4 and has raised his BA to a season-high .226... just six points below Castro, who struck out twice and looked bad doing it. Castro did hit a double in the eighth inning off reliever Paul Clemens (no relation to Roger).

Which brings me to a point I really can't stand about modern managing. What possible reason could Houston manager Bo Porter have for using three pitchers in the Cubs eighth and dragging out that half-inning for 20 minutes? Yes, platoon advantage blah blah blah, but that's really overdone in my opinion. In any case, all the platoon switching resulted in a double, a groundout and a walk and the Cubs might have scored an insurance run if Hairston hadn't gotten picked off. Castro, on third, should have taken off for the plate right away while the fielders were dithering with Hairston, but delayed too long and was thrown out.

Garza started the ninth, but after he walked Jose Altuve, Dale Sveum called on Gregg. I had no problem with this, and Gregg dispatched the three Astros he faced in order, getting ex-Cub Carlos Pena on a ground ball to short right field, right where Barney was playing in the overshift.

The reaction to Pena's first at-bat at Wrigley Field since he left the Cubs was interesting... since there really wasn't any. It was almost as if no one even remembered he had played a year here.

It's still odd to think of the Astros as an A.L. team; it will, like accepting the Brewers in the N.L. was back in the late 1990s, take some time. It was brought home when Astros pitcher Dallas Keuchel came to bat and the AVG on the side scoreboard was blank -- meaning it was his first at-bat of the season, even though he's made eight starts. The Astros had been 6-4 in interleague games coming into this series (3-1 vs. the Rockies, 2-1 vs. the Brewers, 1-2 vs. the Pirates).

One more thing about the Astros: which marketing people decided that orange jerseys look good? Because there are now three teams that use them: the Astros, Marlins and Giants. And they look awful on all of them.

Meanwhile, the Cubs improved to 7-2 in interleague games, and you can crank up the trade rumors regarding Garza and Gregg. Will those two still be around in August? The two teams match up in a 3:05 game Saturday, with Travis Wood facing Bud Norris.