There have been many proposals by the Cubs for changes at Wrigley Field. Here's one they might not have thought of, but should consider. (And it wouldn't require city or neighborhood approval!)

Share All sharing options for: A Modest Proposal For Wrigley's Landmark Scoreboard

The idea for this post came about when the White Sox were at Wrigley Field last week and the score line for the game had "CHICAGO" as the visiting team, with "CUBS" below it. That looked (and has always looked, since interleague play began) very odd to me. Yes, "Chicago" is the visiting team, but in the early days of the Wrigley board, the Chicago American League club was always listed as "SOX", as shown here (click on the image for a larger version in a new browser window or tab): 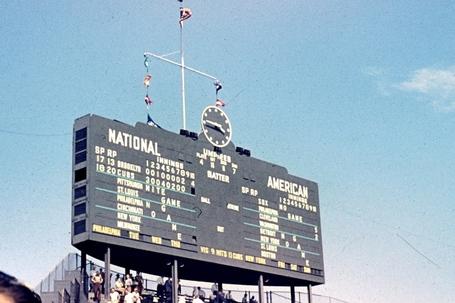 The board read "SOX" for the White Sox as late as 1987; this Sports Illustrated cover depicts the games of June 21, 1987. In fact, you can see in that photo how faded the board had become; within a few weeks after that cover appeared, the Cubs gave the board a fresh coat of paint. One of the casualties of that paint job was the scoreboard panel that read "SAN FRANCISCO"; whoever repainted it couldn't fit all those letters, so for several years the Giants' panel read "SAN FRAN". (It was changed back to "SAN FRANCISCO" in the 1990s.) It was at this time that the Cubs linescore -- which had been on top until expansion, and in the middle from the 1960s through the 1980s -- was moved to the bottom left, where it remains today.

When interleague play began, though, some of the score lines began to look strange. I took this photo of the board depicting an Angels/Dodgers game on June 21, 2009: 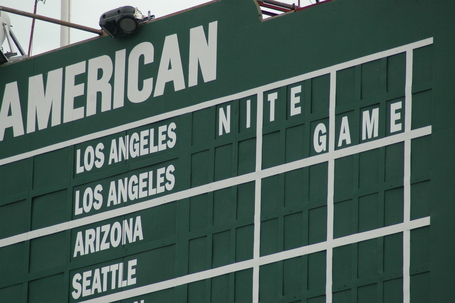 So which Los Angeles team was at home that day? You couldn't tell from the Wrigley board. (To satisfy your curiosity, it was the Angels at home.) This year, the board has panels that read "LOS ANGELES (AL)" and "NEW YORK (AL)" but doesn't have corresponding panels reading "NL", which makes Mets/Yankees and Angels/Dodgers matchups look odd.

That gave me an idea. If you watch scores on MLB Network (or ESPN), they don't list the teams by city name; they list them by team name. Why couldn't the Wrigley board do the same?

Thus, the photo at the top of this post. It shows a Wrigley board that lists all the scores by current team name. (No, that's not a real Cubs game score. Mike & I made it up.) We've been discussing the pros and cons of a Wrigley Jumbotron here, but would you like to see this change made to the classic Wrigley scoreboard, thus "modernizing" it to some extent? I would. I think the Cubs should make this change, starting next year, or even this season if they could get the team names painted, maybe during the All-Star break and the long road trip that follows.

There's one more thing that you might notice about Mike's Photoshop rendering. It has seven score lines on each side of the board, instead of the current six. The board was reconstructed after the 1969 expansion to include the then 24-team major leagues, but it has not been expanded again since then. Thus, on a day when all teams are playing, three games are left off. I don't know if it is physically possible to enlarge the board again, but if they could, this is what it might look like. (Just so you don't drive yourself nuts, the two teams left off are the Athletics and Padres; they'd be playing the only interleague game on this imaginary game day.)

So what do you think? I like it as a way to keep the traditional board, yet modernize it.