Mariano Rivera And The Wrong-Sized Cap

It's truly a joy to watch this humble man pitch. He is the best at his craft who has ever played, or perhaps ever will.

Share All sharing options for: Mariano Rivera And The Wrong-Sized Cap

A few weeks ago, I received an email from a publicist offering me a cap commemorating Mariano Rivera's impending retirement from baseball. The email contained images of several different styles; the one I chose looked like this: 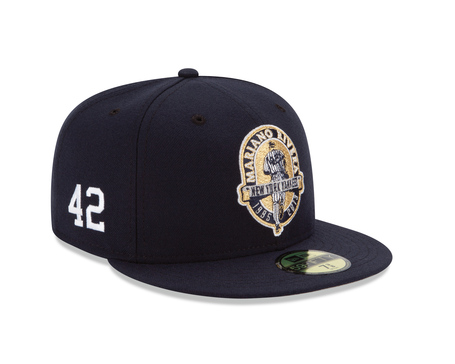 There's one thing they wanted to know in addition to my address -- my cap size. I wear baseball caps every day, but I rarely wear fitted caps, so ... cap size? I had to consult the web to find out how to measure my head for the right cap size. I thought I had it figured out, so I emailed that size to the publicist. 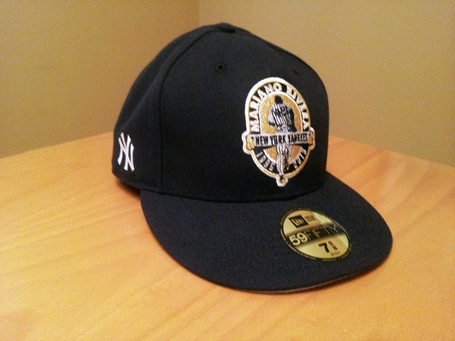 That's a little different than the publicity photo; it has the Yankees logo instead of "42". There was one other problem... I'd given them the wrong cap size. It's way too big.

So it's unlikely I'll ever wear this cap, but it's a nice souvenir to have of a man whose career has been perhaps the most impeccable of any player of his generation. Not only is he the best relief pitcher who ever lived -- and any writer who doesn't put his name on a Hall of Fame ballot five years from next January should have his vote revoked; Rivera ought to be a unanimous selection -- but he has lived his life with class and style.

The way he entered Tuesday's All-Star Game speaks to the respect he engenders among everyone in baseball, as did the standing ovation he got from players in both dugouts before he threw yet another flawless inning -- in his career, he threw nine innings in All-Star Games, allowing five hits and no runs.

It made me think about the reception Ted Williams got at the 1999 All-Star Game:

(Williams ceremony starts at about 36:00 into the video)

That was the game at which the All-Century Team was introduced. Williams, then nearly 81 years old, was the last one to come on to the field at Fenway Park, being driven in on a cart to throw the ceremonial first pitch. Before he did, though, he was surrounded by the players in that year's game, who you could tell were just as awed as everyone else watching, giving their love and admiration to this icon of baseball. Then, Williams, being frail, was assisted by Tony Gwynn, who Williams himself had helped with hitting, in throwing out that first pitch to Hall of Famer Carlton Fisk.

You can't help but get emotional watching that, and Williams was a somewhat controversial figure at times during his playing career.

Not only is Mariano Rivera uncontroversial, he is universally loved. There are few professional athletes in any sport -- few public figures in any field today, I might add -- who engender the respect and love that Rivera does. 30 or 40 years from now, can you imagine the scene at an All-Star Game when Rivera is asked to throw out a ceremonial pitch? I'd love to see that, myself, and hope I'm still around to do so.

I'm glad that 18 years ago, I went to this White Sox/Yankees game, when the Yankees were still using Rivera as a starter. It was just his fifth major-league start, and the best start among the 10 he made before the Yankees permanently converted him to relief. Even then, you could sense there could be greatness in that 25-year-old pitcher (11 strikeouts and just two singles in eight innings).

In this era of cynicism, greed and players doing things they're not supposed to, it's good that we have at least one man who represents class and honor, as well as outstanding performance. I've got a cap to remember him by, even though it's unlikely I'll ever wear it because it's too big. If you want to buy one for yourself, here's where to get started.