Are the Cubs going to lose ticket revenue from scheduling more night games?

The Cubs have received approval, in their plan to renovate and restore Wrigley Field, for more night games starting in 2014 (as well as some Friday games starting at 3:05). The current limit of 30 night dates per year is being increased to 35, with the possibility of several more if national TV networks (Fox, ESPN) want the Cubs to switch a day game to a night game (generally, those will be on weekends).

I've received some research done by SeatGeek which indicates, at least for the 2012 season, that prices on the secondary market for weekday afternoon games were higher than for comparable weekday night games. Among their conclusions:

Here's a chart detailing the differences, for all 2012 weekday series that had both afternoon and night games: 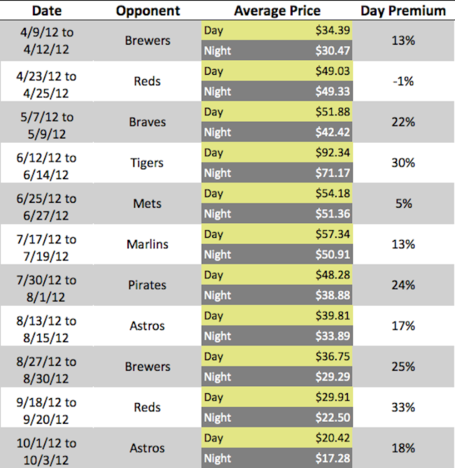 The Cubs have not acknowledged this secondary-market price difference in the way they've priced tickets for the 2013 season. In general, tickets for weekday series -- whether they are all day games, all night games, or a mix -- are priced the same, although there are some differences in pricing levels between "bowl" seats and bleacher seats for certain dates. It's also not clear whether this sort of pricing difference has continued into the 2013 season.

There are, obviously, other reasons besides ticket pricing to schedule more night games. TV advertising revenue, and thus future rights fees, are higher on weeknights than weekday afternoons. The Cubs also want more night games to get their players better rest and to conform with the schedules of most other teams; the MLB average for home night games is about 54, two-thirds of the schedule; the Cubs playing around 40 per year will get them closer to this average.

There is, however, clearly a desire among Cubs fans to see Wrigley Field afternoon games; this is borne out both by the secondary market pricing quoted by SeatGeek and attendance figures at weekday afternoon games, particularly in the summer; those tend to be higher than for comparable night games.

The Cubs appear to have found a reasonable compromise between the team needs to play games at night, while still preserving some of the day-game tradition. It'll be interesting to see how this sort of pricing on tickets works going forward, especially if the Cubs go to a total dynamic-pricing system of their own. Thanks to the guys at SeatGeek for this data.