Eddie Vedder & Co. will take the stage for a Friday night show at Wrigley, while the Cubs are playing the Rockies in Denver.

If you're going to this show (I'm not; just not a big Pearl Jam fan), you already know all the details of the Pearl Jam show at Wrigley Field Friday night.

If not, you should know that this was the fastest-selling of all the Wrigley concerts to date, which surprised me, though I was told by Pearl Jam fans later that I shouldn't have been surprised. 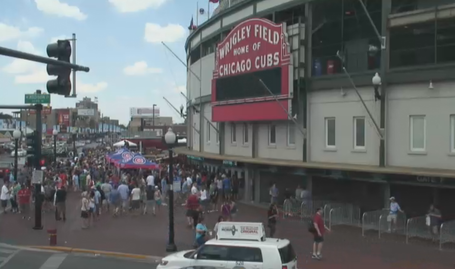 According to a couple of reports on Facebook, some of those people had been waiting in line since 7 a.m.

Hey, whatever floats your boat. Here's a little secret that you might want to take advantage of if you like Pearl Jam and weren't able to get tickets to the show: the live webcam from SportsWorld, directly across from Wrigley (where that screencap photo came from), has live audio. When there's a concert, you can hear it very well from that link. The audio quality is surprisingly good, other than the occasional bus going by.