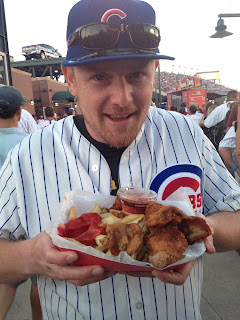 For those of you who watch Cubs games on TV, one of the highlights of the road games has been when Len Kasper and Bob Brenly or, now Jim Deshaies, apprehensively sample the "Rocky Mountain Oysters" at Coors Field in Denver. Yes. Fried Bull Balls cost $7.50, and are served with an unfinishable mound of freedom fries and horseradish cocktail sauce. I'm an adventurous eater, and have eaten everything from cow brains to razor clams wiggling on my fork, but Bull Balls had never touched my nicotine stained lips until last night.
I had chickened out the night before, telling myself the game was too tight, (2-1 Cubs through 7) to trek all the way from my 300 level seat in the Right Field Corner, down to the concessions in section 144 in the Left Field Corner, but last night, I had a 100 level seat close to the food stand where they sell battered and fried bull testicles. So with a hesitant rumble in my stomach, I ordered. 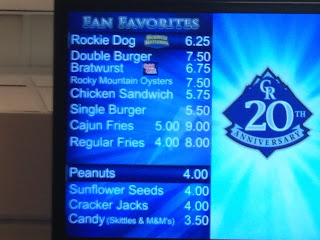 Notice the smaller font for the Oysters. Almost like they really don't want you to eat them. Or more likely, they couldn't fit the words, "Rocky Mountain Oysters" on the sign. They should just call is what it is, "Bull Balls", and the word would be shorter than "Rockie Dog".

Nothing to it but to chew it. 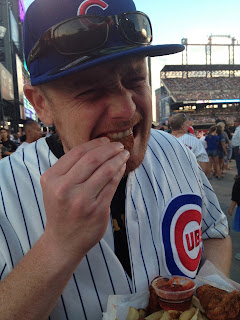 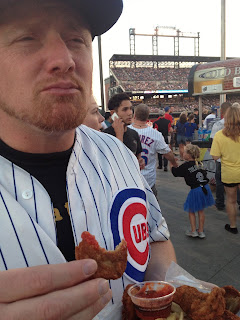 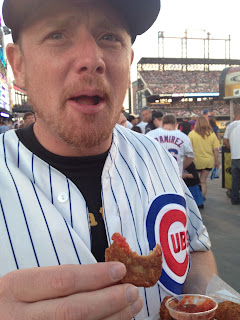 Now, I love eating sweet breads, glands, livers, intestines, and cheeks. Wasn't crazy about brains, hearts. or fish eyes. But these Bull Balls....this is something new. My mouth says, fried oysters from the sea, but my brain says bull balls. 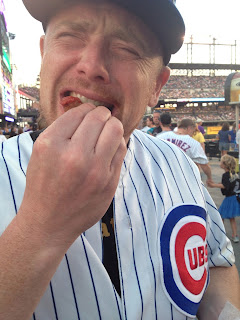 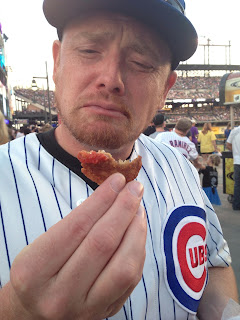 Hmmm...I guess it's someones job to slice up these balls for frying... 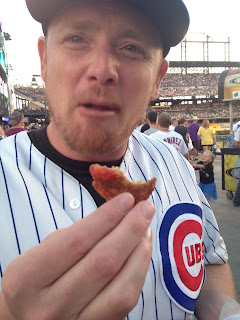 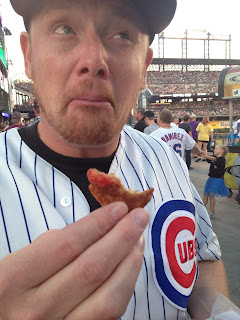 Stupid brain is ruining the flavor, which truly isn't bad. Mostly tastes fried, which is always good. And Hell! If I was l was in a situation like accused cannibal and Coloradan Alferd Packer, who famously was stranded in the Rocky Mountains during the winter of 1874, and was the only one of 6 men to stumble out of the mountains well fed off the flesh of the others, I'd be happy to be eating anything, let alone bull balls! 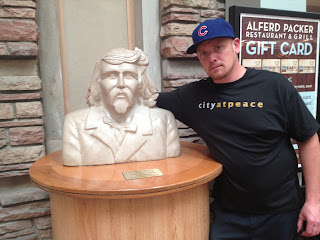 Me and a bust of cannibal Alferd Packer outside of the Alferd Packer Restaurant and Grill on the campus of the University of Colorado. He was convicted of killing the 5 men on his expedition. He also confessed to eating them. 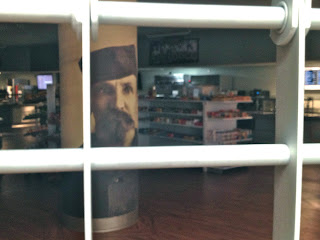 The restaurant was unfortunately closed, but I found it appropriate that Alferd Packer's image was trapped behind bars. A place he spent most of his life. Folksinger Phil Ochs wrote a pretty funny song about him in the 60's....

If I had to resort to cannibalism, like Packer, I would at least try to bread and fry the guy, but the whole time I'd be eating the poor sap, even if he was fried and tasted decent, would be how he was a dead body. Which in and of it self grosses me out, and certainly isn't appetizing. Bull Balls are similar in that, sure they're fried and edible, but I don't look at Bull's balls and think....mmmmmm....I could sure go for a bite of those! But, when I see a healthy fat pig, chicken, or cow, I DO think about eating them, but not ALL of them...ya know?

And I never think about eating people. Apparently, neither did Alferd Packer who was rumored to be a vegetarian when he died of "senility" at age 65. 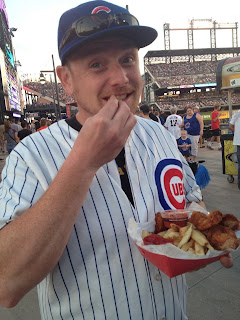 The "Rocky Mountain Oysters" are, in reality, processed and fried rubber mush, and some of the balls seemed to be mostly breading anyway. What I had pictured in my head the day before in the upper deck, was a straight up fried Bull's Ball. These aren't that. And if you told me it was fried oysters, I wouldn't have noticed the difference, except to say, "these are pretty crappy fried oysters". The best comparison I can muster is how Burger King's Onion Rings don't really resemble an onion inside, and the filling of these so called "Rocky Mountain Oysters", also is not reminiscent of a testicle. Thank Jeebus! 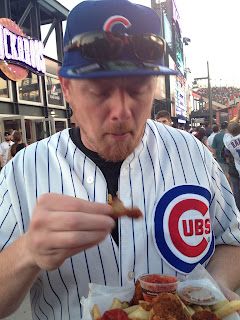 I guess I can't quite separate the flavor, from the thought of an actual bull's testicle. This must be how vegans feel when they look at all of the living parts of an animal. I was a vegetarian once to impress a girl for a few weeks in high school, but I was at a BBQ one afternoon, and famished from eating only carrots and chips, while smelling delicious grilled meat, so I caved and ate a burger. The girl and I broke up shortly after. That was 26 years ago, and I haven't looked back. Now, If I had a choice between a burger and some bull balls, I'd take the burger everyday. Except yesterday. Yesterday I went balls.

However, as a Taurus, I truly did think of the bull, and what he sacrificed to give me, at the very least, an esculent experience. (Esculent means edible...I just wanted to be fancy). I mean. The poor bull! There exists a moral dilemma in caring about the bull and his nuts in my brain, but totally happy to eat a cow's loin, lamb's leg, or duck's liver! What is the point of drawing culinary lines in my mental palate, when one of four people in the world eat insects. Ultimately, I can't say whether I think "Rocky Mountain Oysters" taste good or not. My damned brain was in the way. Always in the way....
I followed up the whole testicle eating experience with a meat I am intimately more familiar with. Famous Dave's Chocolate Covered Bacon. 3 strips for 2$!!! Great deal! Sweet and salty deliciousness. If I ever go back to Coors Field, I think I'll opt for their Ribs or the Todd Helton Burger. (Yes, the Helton Burger is a real thing). Can't wait to eat the Rizzo Style Pizza, or Starlin Castro's famous Mofongo, after the Wrigley renovations. Sharkburgers anyone?
What could be Chicago's version of "Rocky Mountain Oysters"? How about "Cubby Burgers" made of real baby bear meat? Or Montrose Harbor caught fish and chips? Hey! It's local! That's good right? My neighborhood, Uptown, is full of rabbits during baseball season, and rabbit is super tasty! Maybe the Cubs could serve specialty dishes like Cardinal wings when St. louis hits Chicago, or communion wafers and wine when the Padres come to town. Sure. We have the Chicago dog, a delicious classic, but these Wrigley renovations should not only bring our beloved ballpark into the modern age, but also advance our collective palates into the modern word...you know...the one where a quarter of the people eat insects.... 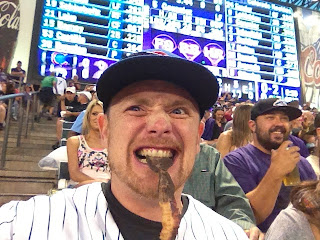 What "New" food should be served at Wrigley Field?