The Reds Are Playing A Home Game In San Francisco

These teams battled it out in a NL Division Series in 2012. They'll play a doubleheader Tuesday under unusual circumstances.

Share All sharing options for: The Reds Are Playing A Home Game In San Francisco

I realize this has nothing to do with the Cubs, but it is something that, to my knowledge, has not happened before.

The Reds and Giants were rained out in Cincinnati July 4. It was the Giants' last scheduled date in Cincinnati, but the two teams are playing this week in San Francisco.

They rescheduled the rainout as a single-admission doubleheader tomorrow. Standard procedure, right? Have a look at this, clipped from the dead-tree edition of the Tribune this morning: 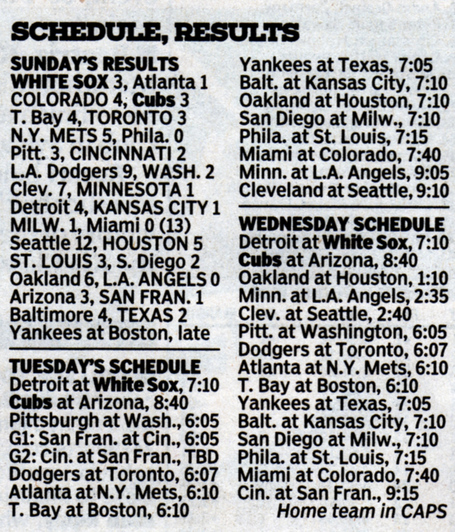 I looked at that and thought, "That can't be right. How can one team be the visitors in one game of a doubleheader, then the home team in another?" (Plus, the notation "Home team in CAPS" doesn't appear to be the way they listed the teams, either.)

Then I checked the MLB.com scoreboard for Tuesday. Same thing: 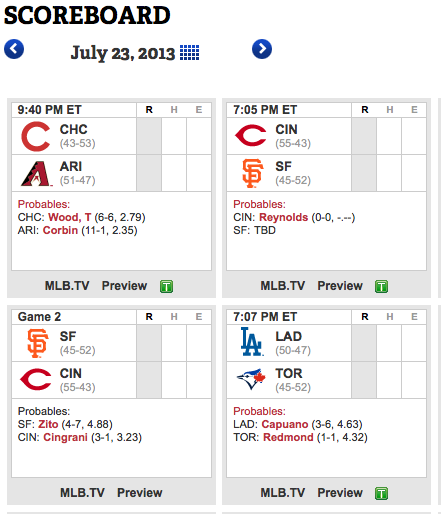 So the Reds will be the "home" team for Game 2, although there's no revenue to them as a result; that was already lost from the July 4 rainout.

There have been games played in this manner before; in 2011 the Marlins had to move three games against the Mariners to Seattle (due to MLB's schedulers putting games in Dolphin Stadium when a U2 concert had been scheduled there) and the Marlins batted last and the game was played by NL rules -- but looking at the Marlins' game logs from 2011, you can see they were listed with 84 road games.

It's generally been the case when a team has had games rescheduled for the opponent's city, that the other team gets the "home date". In 1978, a Cubs/Mets game rained out in New York was played at Wrigley Field, giving the Cubs 82 home dates that year. In 1991 when concrete fell at Olympic Stadium in Montreal, forcing the Expos to play their final 26 (!) games on the road, two of them were at Wrigley Field; the Cubs were credited with 83 home dates in 1991.

The Reds and Giants couldn't figure out a mutual off day to play their makeup game, so they're doing it this way. There could be more of these if there are further rainouts this summer, another effect of the way MLB scheduled the 15-team leagues. Let's hope they do better with the 2014 schedules.

If anyone has any evidence that a previous rainout, rescheduled for the other team's city, was played in this way -- with the visiting team batting last -- please let me know in the comments. Otherwise I believe this to be a MLB first.