The O.co Coliseum: A Blast From The Past

The home of the Oakland Athletics hasn't changed much since I was first there in the 1970s (except for its monstrous outfield seating structure). That makes it an interesting trip into baseball's past.

Share All sharing options for: The O.co Coliseum: A Blast From The Past

OAKLAND -- I was reminded of how old the O.co (pronounced "oh-coh" by the PA announcer) Coliseum is when I stepped into one of the men's rooms. Troughs! Just like Wrigley!

Home of the Athletics since 1968, the Coliseum is either the fourth- or fifth-oldest stadium in Major League Baseball (depending on whether you count the Angels' park in Anaheim as being constructed in 1966, or date it from its 1996 rebuild), behind Fenway Park, Wrigley Field and Dodger Stadium. And it shows. It's grimy, gritty and concrete, surrounded by industrial areas, parking lots and freeways, just like the urban planners of the 1960s told us we would want in The Sports Stadiums Of The Future. It didn't take long -- less than 40 years -- to get every one of the "concrete ashtray", multi-purpose stadiums built in that era to get replaced and/or demolished.

Except for the O.co Coliseum. (And I had to think: really? Overstock.com as a naming-rights company? How much could that possibly be worth?) As noted in the series preview posted Tuesday, this stadium felt much nicer to be in prior to the construction of "Mt. Davis" (derisively named after Al Davis, owner of the Oakland Raiders) in 1996, the colossal monstrosity's worth of seats and skyboxes intended to be used for Raiders games: 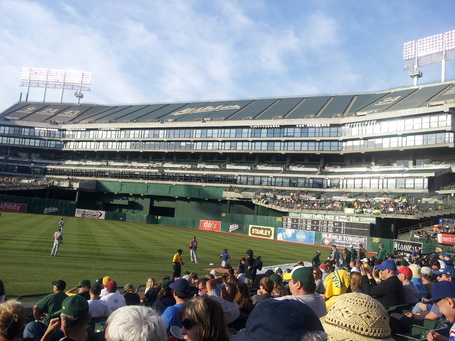 Mt. Davis -- you can tell why it's called that, I think; it's far larger in person than you can see in that photo, dominating the entire view and the glass on the suites reflecting the lights after dark -- blocks what was once a lovely view of the Oakland hills beyond the outfield; I remember seeing that view when I was first at this stadium in 1975. Back then, the A's were coming off four straight division titles and three straight World Series appearances. They won the A.L. West again in '75; This was the game I attended back then; you can see there was nearly a full house in what turned out to be an ALCS preview.

Tuesday night, not so much; the announced crowd of 17,273 was maybe 12,000 in the house, likely lowered by the BART rapid-transit strike. There's a station right outside the center-field entrance, a bit of a hike, but easily accessible by anyone who wants to ride public transportation to the game. That's something the stadium planners couldn't have thought of when they were building this place in the middle of a sea of parking lots. The lots were easy-in, mostly-easy-out, though I found the $17 price to be quite high, the highest I've paid at a ballpark.

Food choices were pretty ordinary, and prices about commensurate with Wrigley Field, some slightly higher. The A's have tried to gussy up the concourse with brightly-colored awnings over the concession stands, but they're still underneath acres and acres and acres of concrete. It's kind of depressing, especially when this is the view beneath Mt. Davis: 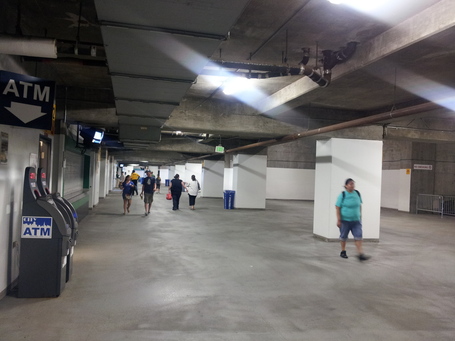 That's right. In the outfield, not one of the concession stands was open, and the whole atmosphere beneath those seats looked and felt like a warehouse, only with no wares, just a few people. There were, though, fans sitting in the left-field and right-field bleacher areas -- and the right-field bleacher crew was one of the more intense I've seen, waving flags and making noise with ... well, it sounded like bells and drums and whistles ... throughout the game. Good for them -- that's loyalty, especially when the franchise doesn't really have a suitable stadium; that group is sitting much farther from the action than anyone in the Wrigley Field bleachers. In fact, the Coliseum is so large that you could probably fit Wrigley and its entire seating structure comfortably on the playing field alone in Oakland. This is the view from the left-field corner: 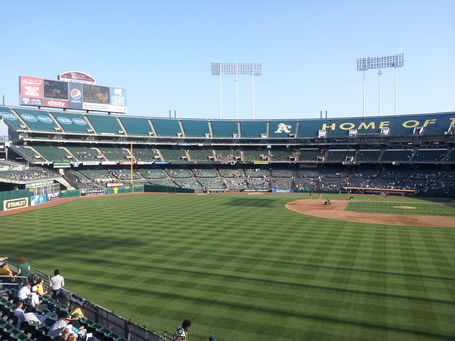 Here's the view from my seat, just past first base: 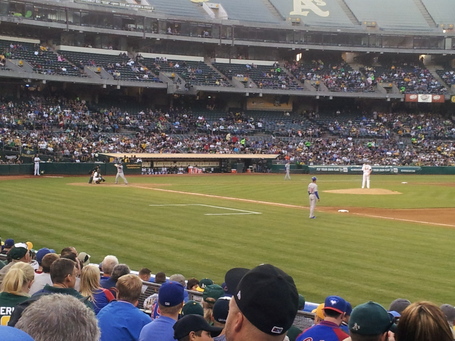 Now, that's considered to be a fairly good box seat, 11 rows behind the wall, yet because of the configuration of the stadium, it's still far from the action. Also, the lower rows aren't on the stadium-seating angle that more modern stadiums are built with, so if people in front of you insist on standing (as some guy about five rows in front of me did, directly blocking my view of the pitcher's mound), you're not going to be able to see.

I shouldn't complain too much. This stadium is a throwback. Because the A's want to get out of there so badly, they really haven't done much to improve things. There are two scoreboards, one over the right-field corner, one over the same spot in left field, on top of the upper deck (which is completely tarped off, because few ever bought those seats, reducing the capacity to 36,067 for baseball). They're pretty basic 1990s-era boards; there's a small video board that's hard to see, and a simple board giving the linescore and player stats. A similar board keeps the balls and strikes on the upper-deck facade. I was somewhat surprised that in the Bay Area, so close to Silicon Valley, that the Coliseum had no WiFi. Another expense, I presume, that neither the A's nor the Coliseum authority didn't want to spend on.

Staff there was friendly and helpful. I did something I've never done before when going to a road series -- packing up for the trip, I left the game tickets on my desk in Chicago. I called the A's Sunday when I arrived -- surprisingly (to me, at least) there was someone who answered the phone who was able to tell me exactly where to go to get them replaced. There's a Ticket Services office, mostly used by season-ticket holders but also for things like this; with the credit card I paid for and an ID, they re-printed the tickets for me at no charge. Nicely done, A's.

New York Mets fans used to say this about Shea Stadium: "It's a dump, but it's our dump." A's fans seem to feel the same way about the Coliseum; while they might not be fond of its sightlines and amenities, it's home for them, and going there is in many ways a trip back in time, to the way going to a baseball game felt in the 1970s or 1980s. Nevertheless, they both need and deserve that new home, and in San Jose, the most logical place in the Bay Area for them to be located. Here's hoping they get that new home soon.