In the midst of a four-error "performance" by the Kane County Cougars, there were signs of potential real major-league prospects. Confused? Read on.

Since it was a beautiful Sunday afternoon and the Cubs were on the road, I decided to hie myself out to Geneva, Illinois and take in a game of the Cubs' Low-A, Midwest League affiliate Kane County Cougars.

All right, I confess -- another thing bringing me out there was a bobblehead giveaway. I love bobbleheads, and this one was a really nice one, of Cougars organist Nancy Faust (and the Cougars announced during the game that Faust has signed on for another year of playing the organ at all Kane County Sunday games): 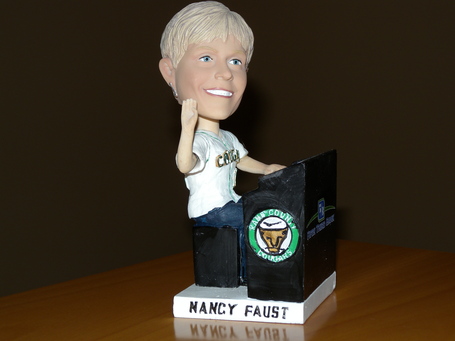 Beyond that, I wanted to see some of the prospects so many here have been excited about. Unfortunately for me, Albert Almora is on the seven-day DL, and so didn't play in this game. But I was curious to see Dan Vogelbach, Jeimer Candelario and Willson Contreras, among others.

Tayler Scott, a tall, skinny righthander who was the Cubs' fifth-round pick in 2011, started the game, and promptly got in trouble -- but only partly of his own making. The Cougars committed two errors in the first inning, one of them on a ground ball to second baseman Giuseppe Papaccio (what an awesome name!) that would have been an easy chance for any big-league 2B, and the other on an overthrow by Scott himself after a play at the plate. That one featured not only one, but two throws that hit something they shouldn't have; the throw to the plate hit the runner in the helmet, and then Scott's attempt to get the runner at second hit the runner, all hands safe.

By the time the inning was over three unearned runs had scored. Oddly enough, the final score of this game matched the big-league Cubs' score Sunday -- an 8-4 Cougars loss to the Cedar Rapids Kernels (a Twins affiliate). If the Cougars had played better defense, they could have won the game, as five of the eight Kernels runs wound up being unearned due to shoddy defense by Kane County.

The photo at the top of this post is of a meeting on the mound after Scott (No. 25) got hit on the leg by a line drive with one out in the fourth. No. 24 is Rock Shoulders; manager Mark Johnson is partly hidden behind catcher Contreras; No. 12 is Candelario. He managed to pick up the ball and throw the hitter out and stayed in the game for one more inning... when the following happened:

The three earned Kernels runs came from a colossal three-run homer by Adam Walker, his 26th of the season. That total leads the Midwest League by a significant margin (next is Victor Roache of Wisconsin with 20; those are the only two hitters in the league with 20 or more). Walker's blast cleared the hitter's background in dead center field, probably at least a 430-foot home run.

Regarding Dan Vogelbach, I was a bit disappointed as he didn't show any of the power I've heard about. Instead, he drew three walks -- there were 11 walks combined in this game -- and blooped a little single into left-center field in the sixth inning, where he was stranded. Jeimer Candelario played a solid third base and singled and walked, but I was most impressed by catcher Willson Contreras.

Although Contreras was also charged with an error (for dropping a foul popup; the batter eventually struck out), he also made some really nice and quick plays out in front of the plate, one on a little dribbler where he threw out the runner with an accurate throw, and twice on dropped third strikes. Contreras is really athletic and has begun to hit for a bit of power in the Midwest League (.429 SLG coming into Sunday's game); he went 1-for-4 at the plate (a single). The Cubs have been searching for catching prospects for quite some time; I think they might have found one. Contreras is 21 and should only get better both offensively and defensively from here.

All told, the Cougars were just like the Cubs. They went 2-for-11 with RISP and left a gargantuan total of 14 runners on base, leaving RISP in the first, second, third, fourth and seventh innings before, apparently, tiring of this game and getting just one single in the eighth and ninth innings.

I had tweeted a photo from my seat, and got a tweet back at me from John Arguello of Cubs Den asking me where I was. After I answered, I found him... sitting in the row right behind me. Had a nice conversation with him through the game; it was nice to meet him and you can read links from Cubs Den every Tuesday, Thursday and Sunday here at BCB in Cub Tracks.

There's potential on this team, but keep in mind, most of these guys won't ever sniff the major leagues. Of the players I saw today, I think Candelario and Contreras have the best chances at big-league careers, and you'll note I leave Vogelbach off this list. I just don't think he's going to make it unless he drops a lot of weight and can learn to play a competent first base or outfield. He was the DH Sunday, and I know he can hit, but unless he hits monstrously -- and he's not -- he won't make it at the size he currently is. That's just my view, of course.

Wish I'd have been able to see Almora, and I'm guessing Kris Bryant might make it to Kane County before the season is over. It's fun baseball and the ballpark is pleasant. The food was good -- had a Philly cheesesteak with onions and peppers -- but the prices are big-league, probably understandable given that the Cougars operate in the Chicago market. If you're in the Chicago area, you should definitely take in a Cougars game. It's worth the ride -- just about 50 minutes from the North Side if there's no traffic -- and the price is right (top ticket is just $12, a bit more if you buy day-of-game).

Here are some more photos from the game: 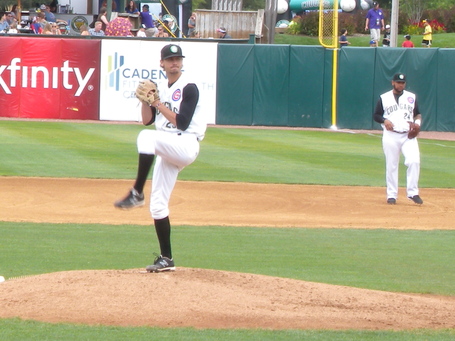 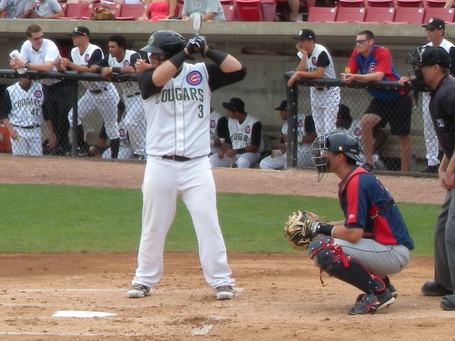 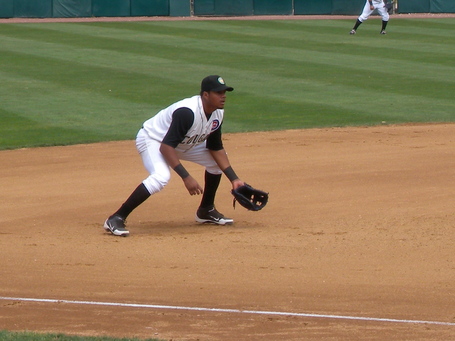 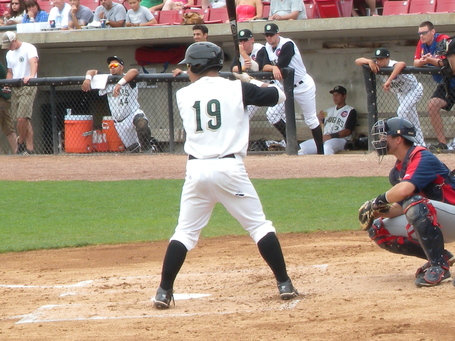