Monday night, the Cubs gave out a "reissue" of the cap they gave away at the first night game August 8, 1988. Here are photos of that cap... and the original.

Share All sharing options for: A Cubs Giveaway, 25 Years Later

The photo you see at the top of this post is the "reissue" of the "Opening Night" cap the Cubs gave away at the first scheduled night game at Wrigley Field, August 8, 1988.

That prompted me to dig out the original cap, which I've saved to this day. Here it is: 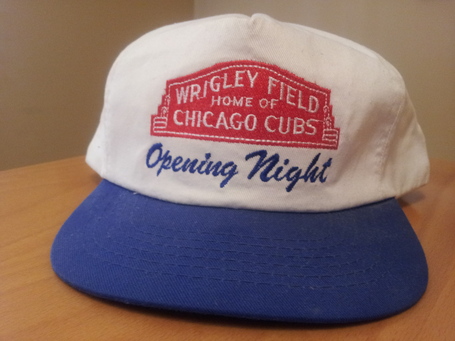 As you can see, the reissue is quite a faithful reproduction of the original. The "Opening Night" script is identical, and the Wrigley marquee shown is very, very similar. You can't see the top of the original cap in this photo, but it does have a blue button, same as the original. It's hard to tell by these photos, but the cloth the reissue cap is made out of is of somewhat better quality than the thinner cloth of the original. Nevertheless, the Cubs did a nice job on this promo item.

There's one more difference between the two -- the giveaway sponsor on the back of the cap. Here's the one from last night: 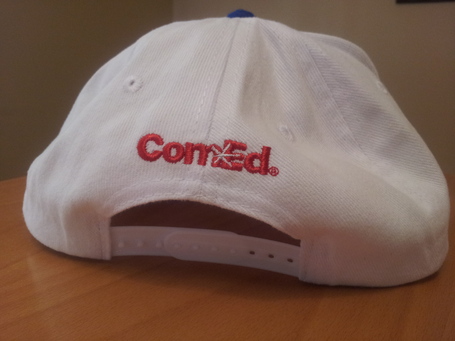 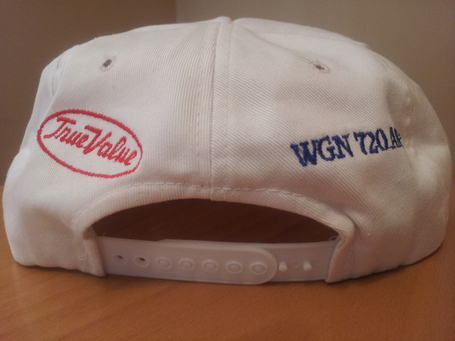 You can also see they reproduced one other thing faithfully -- the plastic snaps on the back of the cap. Most caps aren't made that way now, but that was common in 1988.

I thought you'd be interested in seeing the two caps side-by-side. Who else has their original "Opening Night" cap?