They're giving away a Cubs-related bobblehead at Dodger Stadium soon. There are a couple of things worth noting about this.

Share All sharing options for: The Rick Monday Flag-Saving Bobblehead

On Sunday, April 25, 1976, the Cubs lost to the Dodgers 5-4 in 10 innings at Dodger Stadium. It would have been a totally unremarkable game, except that two men jumped on the field and attempted to set fire to an American flag during the game. Different times, and all that.

Rick Monday, playing center field for the Cubs that day, raced over and grabbed the flag away from the men. The photo at the top of this post shows Monday, at a ceremony in 2006, with the original flag he saved.

When the Cubs play the Dodgers in Los Angeles on August 27, the Dodgers are giving away a Rick Monday bobblehead depicting this event. Here's what the bobblehead will look like: 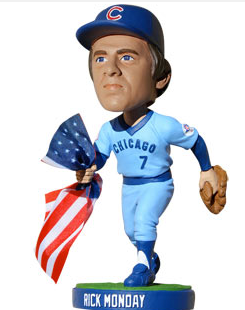 As you know, I love bobbleheads. Wish I could go to L.A. to get one, but that's not going to happen, unfortunately.

Perusing the list of Dodger giveaways, it appears that almost all of them are given to the first 50,000 -- which would cover pretty much everyone who comes to the game. It would be nice if the Cubs would do this, too, for giveaways. It'd be a fan-friendly gesture that would cost the Cubs nothing (since the sponsor generally pays for the giveaway).