There's not much to say about this loss, but I managed to stretch it out to almost 700 words anyway.

It really does get same old, same old, writing recaps of another dully played Cubs defeat. So here's a photo of a cute kitten: 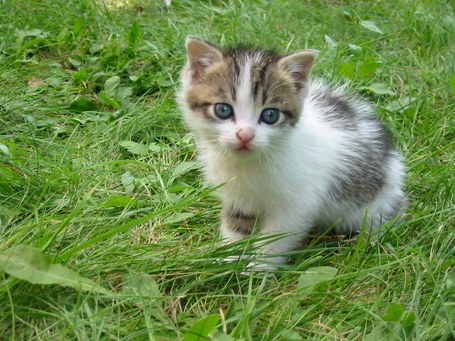 Anyway, the most interesting thing about this game is the story of how Dale Sveum (and James Russell) were ejected: Donnie Murphy had been called out for swinging at a pitch in the dirt. It was borderline whether that was a swing or not, but the Cubs were down 6-1 at the time and the umpires probably were as eager to get out of town as the Cardinals. Russell must have been on plate umpire Phil Cuzzi from the bench and that's what got him tossed; Cuzzi still had the ball that bounced in his hand. He flung it rather disgustedly at the dugout; that's what brought Dale out, animatedly so. I found myself wishing he'd have pulled a Lou Piniella and gone and taken a base and flung it into the outfield or brought it into the clubhouse or something, because at least that would have been more entertaining than the game.

But that's not Dale. He didn't. Not that it would have changed the result of the game, but man, these are getting boring. It's getting to the point where the Cubs even scoring a run at home is cause for celebration, so let's celebrate a two-out David DeJesus walk and a run-scoring double in the gap by Junior Lake. That was it for Cubs crossing the plate today, or, in fact, any time since Friday.

Meanwhile, Edwin Jackson had an Edwin Jacksonian start, the ones that make you want to look away at every pitch. You certainly have plenty of time to do that, because he's about the slowest worker this side of Steve Trachsel. Somehow, Jackson got his ERA to go down -- it's under 5.00 for only the fourth time post-start this year -- but that's only because Lake dropped a lazy fly ball that probably would have gotten Jackson out of the second inning with only one run scoring. Instead, Matt Carpenter hit a two-run single to make it 3-0 and we all probably could have gone home (or, in your case, you could have turned the TV off) after that.

Still, the DeJesus-Lake combo made it 3-1 and there was a tiny glimmer of, "Hey, maybe," but the Cubs' bullpen took care of that in the seventh. Carlos Villanueva gave up a walk and a loud double, and then Russell was summoned to face Jon Jay. Platoon advantage and all, don'tcha know.

That worked real well. Jay hit a three-run homer off Russell to put the game out of reach.

The Cubs did manage to get two runners on in the seventh before Adam Wainwright struck out the side, and a runner on third with one out in the eighth before a really bad send on a fly ball to Matt Holliday by Anthony Rizzo; DeJesus was thrown out easily trying to score, ending that inning. And then, with two out in the ninth, Trevor Rosenthal, who had been summoned because he hadn't pitched since last Thursday and it seems as if opposing managers are using these games against the Cubs as spring-training-type affairs, issued two walks.

All that did was increase the Cubs' left-on-base total to seven when Darwin Barney lofted a soft fly ball to center field to end it. The Cubs were 0-for-6 with RISP. This isn't an unusual occurrence, as you know. The final score, as you also know, was Cardinals 6, Cubs 1.

Even with this loss and all the shutouts, the Cubs' run differential stands at -49, which keeps their Pythagorean win projection three wins ahead of their actual record. The 70th loss of the season puts the Cubs on pace for 92 losses. That would make this their third straight 90+ loss season.

You might think you've lived through some bad Cubs baseball, but only people my age or older have seen that before. The last time the Cubs lost 90 or more games three years in a row was 1960, 1961 and 1962.

Hope you liked the kitten.