The former Cub made news Saturday with tweets.

I thought about this for quite some time before writing about it, but figured, "Hey, it's a story, and it involves someone who was a member of the Chicago Cubs until two weeks ago," so here goes.

Matt Garza pitched against the Athletics Saturday afternoon. In the seventh inning, with the A's up 3-2, Eric Sogard (pictured, above, with Garza after the play) executed a squeeze bunt to give the A's an insurance run. This is a perfectly acceptable baseball play under the circumstances, especially between two division rivals fighting for a division crown.

Not according to Garza it's not, though. Susan Slusser of the San Francisco Chronicle tells what happened next: 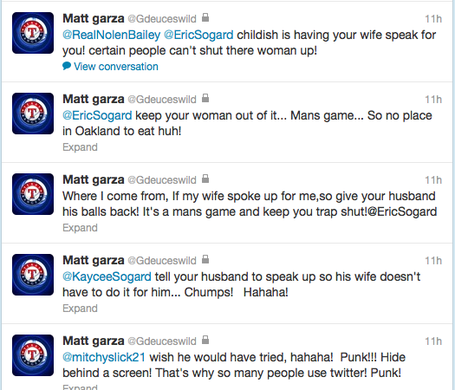 Kaycee Sogard, via her own Twitter account, apparently found it funny. After the game Saturday, Garza spent several hours on Twitter after this incident talking about "negativity" and letting his "competitive edge out".

I can understand an athlete being a fierce competitor. That's certainly what has made Matt Garza a success at the major-league level. This kind of thing crosses the line, I'd say.

Here's the take on this incident from our SB Nation Rangers site Lone Star Ball.