It's the final month of the 2013 regular season. Here's what you can look forward to.

ICYMI, the Cubs have made three additions to the active roster. Go here for the complete scoop.

The Cubs will face four teams this month who are likely headed to the postseason: the Reds, Cardinals, Braves and Pirates. That will account for almost half -- 13 -- of the 27 remaining games. Seven of those 13 are against the Pirates, so the Cubs might have something to say about Pittsburgh's place in the division race. The Braves are at Wrigley Field with just nine games remaining in the season; Atlanta will likely have clinched the N.L. East title by then. And the Cubs finish the year at St. Louis, which might mean everything -- or nothing -- to the Cardinals.

Also, I received the Rick Monday flag-saving bobblehead I ordered via eBay yesterday. Extremely cool, and the flag is made of actual cloth: 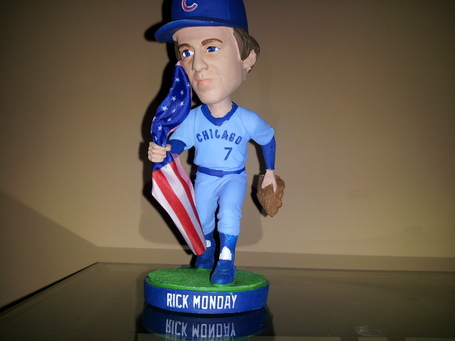 Why is Brian Bogusevic playing ahead of Junior Lake? And, so much for Dale's pledge to put Luis Valbuena into the starting lineup.

Jake Arrieta last faced the Phillies June 8, 2012 in Baltimore. Trust me, this is another outing you really don't want to look at. (The usual "Don't say I didn't warn you" warning applies.) He gave up what turned out to be the last home run of Mike Fontenot's major-league career, for whatever that's worth, that day. Arrieta has been maddeningly inconsistent since he came to the Cubs -- two really good starts, two not-so-good -- which, I suppose, was the reason the Orioles were willing to deal him. Here's to more "really good" for him. The numbers above are Arrieta's total numbers this year; here are his numbers for the Cubs only:

Kyle Kendrick faced the Cubs August 6 in Philadelphia and gave up five runs in six innings. That's usually enough for a pitcher to be defeated, but... well, you know. Donnie Murphy and Anthony Rizzo homered off Kendrick that day.

Here's the scoop on game threads for 2013. You'll find the game preview -- like this one -- posting as the first link in the StoryStream™, which will then contain all the overflow threads and the recap. The recap will also be on the front page as a separate post; once I post a game recap, the stream for each game will be retitled "Cubs vs. (Team) (Day of Week) Game Threads" so you can go back and find every thread related to that particular game.