Dioner Navarro's home run onto Waveland Avenue in the seventh inning did something no one has ever seen before at Wrigley Field.

It's said that if you go to enough baseball games, eventually you will see something you have never seen before.

This time, I think I saw something that not only has never been done before, but very likely will never be done again, and the result is what you see depicted at the top of this post. It's not every day that I'll insert a photo of a United States Postal Service minivan as part of a game recap, but it's there because Dioner Navarro's seventh-inning home run smashed the rear window -- seen clearly above -- on the fly. It was the perfect storm -- a van parked in the exact spot that Navarro's blast was headed by the postal carrier, a woman out delivering mail to the neighborhood. Had she been driving a car instead of a van, the ball would have hit the top of the trunk, since there would have been no window in the way.

Seriously, in a season as dull and uninteresting as this one has been, that was probably the most fun thing that's happened at Wrigley Field all year. It was even better that the homer tied the game and brought the Cubs all the way back from a 5-1 deficit against a very good Braves team. Now if the Cubs had managed to win the game, that would have made it the very best day of the entire season at Wrigley.

You can guess the rest, if you don't know already; Kevin Gregg had his second four-runs-allowed outing of the season, capped by a two-run double by Andrelton Simmons, and the Braves defeated the Cubs 9-5. In so doing Atlanta clinched a tie for the National League East title; we can all root for the Marlins to beat the Nationals tonight so that the Braves will clinch while having dinner in downtown Chicago, instead of tomorrow on the field at Wrigley.

The rest of the game was a parade of pitching changes; from the sixth inning on there were no fewer than seven mid-inning pitching changes, dragging the game out to three hours and 15 minutes (it had actually moved fairly quickly through the first five). It was as if it were a game of managerial chicken -- the manager who refused to take the platoon advantage was going to lose. In the end, it was Dale Sveum's Cubs losing, their 90th defeat of 2013, which makes this one of the four worst seasons in Chicago overall baseball history, just the fourth year in which both the Cubs and White Sox posted 90 or more losses (1948, 1949 and 1986 are the other three).

Scott Baker, known as an extreme fly-ball pitcher, gave up two home runs -- which isn't terrible if you don't have runners on base. For the first homer, by Chris Johnson, it was with two out and no one on. Unfortunately, Baker walked a pair before Freddie Freeman's blast off the batter's eye lounge, which gave the Braves a 4-0 lead; one inning and one run later, Baker's game, and likely his season, were done. Of the 12 outs Baker recorded, eight were on fly balls. Again, that's all right, if you can limit the damage by not walking people. Today, Baker failed to do that. I'd still consider signing him to an incentive-laden contract. Say, a $2 million base with $1.5 million for every 10 starts. That way he makes $6.5 million for a 30-start season, about right for a guy of his ability.

Starlin Castro and Donnie Murphy also homered for the Cubs Friday afternoon. Murphy's home run was the 30th by a Cubs third baseman this season, a remarkable total, although that goes along with a combined .222 batting average (entering today). Cubs' 3B had a .756 OPS entering today, which is a bit above the major-league OPS for third basemen (.736).

But man, the story of the game is the broken window. Navarro could hit 1,000 more baseballs out there trying to do that and couldn't. Here are some more photos (all photos by Al Yellon). Click on each one to open a larger version in a new browser window: 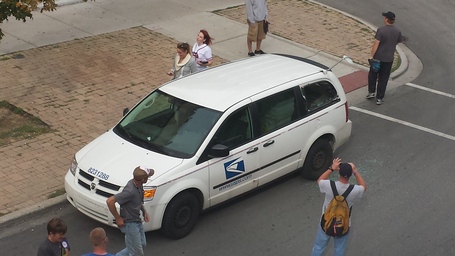 A photo of people taking photos of the broken window 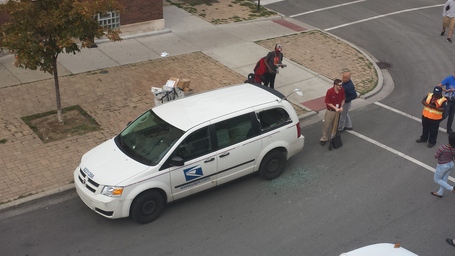 A Cubs employee prepares to clean up the broken glass 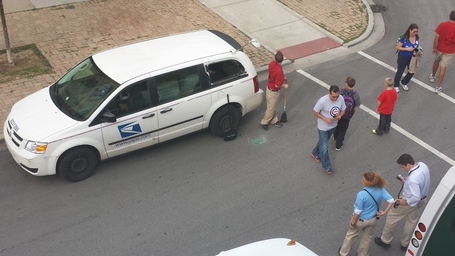