The Cubs won, but few were around to personally witness this feat.

I'm going to bury the lede here, so bear with me while I tell you about the baseball-related events in the Cubs' 9-7 win over the Marlins on a gorgeous, warm, summerlike afternoon at Wrigley Field.

The Cubs smacked out four home runs, including what turned out to be the game-winner by Donnie Murphy with Dioner Navarro on base in the seventh inning. Navarro had just singled in two runs; the four-run inning helped the Cubs come all the way back from a 6-3 deficit going into the bottom of the sixth. Navarro, Starlin Castro and Ryan Sweeney completed the home-run barrage off Brian Flynn (making his major-league debut) and five other Marlins pitchers.

Meanwhile, Jeff Samardzija was striking out tons of Marlins -- until that sixth inning, when he gave up a pair of singles and a walk before Adeiny Hechavarria hit a grand slam. You know, the same Hechavarria who I had noted in the recap a couple of days ago as one of the three worst offensive players in baseball this year. (He's hit three homers this year, two of them slams.)

All told, the Cubs had 11 hits and drew six walks; they were just 2-for-10 with RISP, but the home runs made up for any failure to hit with runners on. What this proves is... pretty much nothing, because they were beating up on the worst team in the National League. The win prevented a Marlins sweep, and also won the season series for the Cubs over the Marlins, four games to three, for whatever that's worth.

Kevin Gregg finished up a sluggish ninth inning that included a pair of walks -- although it appeared he was getting squeezed by plate umpire Ed Hickox on a few of those pitches -- for his 29th save. One more save for Gregg, should he get there, would make this the 17th 30-save season in Cubs history. (For comparison: Mariano Rivera alone has 15 such seasons.)

Koyie Hill went 1-for-4 with a double for the Marlins. Why there was no video tribute to him on his return to Wrigley, I have no idea.

Now, here's the real story of the game, the attendance, or lack thereof. You can see some of that in the photo of Murphy's seventh-inning home-run trot at the top of this post. There are... a lot of empty seats, and that wasn't just because it was the seventh inning of a really, really slow (three hours, 18 minutes) game.

The announced number of tickets sold -- 20,696 -- makes this the lowest official attendance at a September game at Wrigley in 11 years, since 20,032 paid to see the Cubs and Reds September 26, 2002. (Comparison point: the lowest attendance in September 2012 was 25m891, so you can see how season-ticket sales have dropped).

But there wasn't anywhere close to 20,000 in the seats. There were fewer than 1,000 people in the bleachers; my in-house estimate for the entire ballpark, tweeted during the game, was about 9,000. It felt sort of 1975-ish around Wrigley Wednesday; they easily could have closed the upper deck, as they did in those days: 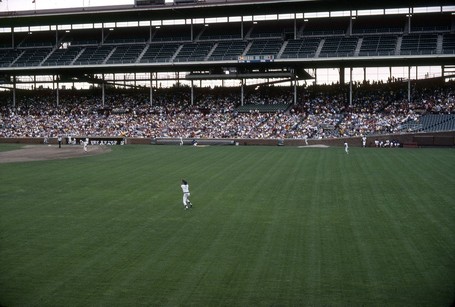 ... and had everyone up there come and sit in nicer seats downstairs; there were only a few hundred people upstairs, and many of the concession stands both in the bleachers and elsewhere, were closed.

You should know, if you have not yet heard, that a small boy who was hit by a bat accidentally thrown by the Marlins' Giancarlo Stanton in the sixth inning was not seriously hurt and was able to return and watch the rest of the game. (Check out the photo of Stanton in that link; he seemed very upset and concerned about what had happened.)

I received an email from a reader of this site early this morning about where this reader stands on the "waiting list" (I won't say who; it's up to the individual to say so if they so choose), and then a second email this afternoon that read (in part), regarding a possible offer to buy season tickets for 2014:

It might very well be true that once the team starts winning again, people will return. But... there are no guarantees (RIGHT?), and in the meantime, in my view, unless ticket prices drop fairly significantly, the team will take a serious hit in attendance in 2014.

I'll have more on this as the season concludes, and after next year's schedule is available, which should be in about two weeks. In the meantime, the Cubs "improved" to 6-18 at home after the All-Star break with this win, and will take on the Brewers in a series starting Friday. We'll have plenty to talk about here on tomorrow's off day, so don't go away!