BCB's Danny Rockett received a Cubs Convention ticket for Christmas. So off into the snowy January night, and into the Sheraton he went with the thousands of Cubs faithful who couldn't wait out the winter.

Share All sharing options for: An Unconventional Cubs Convention

For the diehard Cubs faithful, autograph hounds, and people who enjoy milling about, have I got the place for you... The 2014 Cubs convention! Having never attended one myself, I didn't know what to expect. I sat at home, hours before the convention, imagining what it would be like, to be in a large hotel, surrounded by Cubs fans, and great baseball players, both present and past (mostly past), and you know what? It was exactly like being in a large hotel surrounded by Cubs fans and players. Which is way better than being surrounded by most everyone I'm usually surrounded by, so yeah…it's great!

Now, I'm not a convention guy. Not a joiner, a bandwagoner, or any of that nonsense. I just love Cubs baseball. And so does this guy.

That's right... this dude's wearing a bathrobe. I saw him upon entrance and immediately felt at home. Only two types of people wear bathrobes in public. Crazy people and Cubs fans. I am both.

So here's the story on my end. My sister gave me one Cubs Convention pass as a Christmas gift. The Cubs sent me two passes by mistake. But I wasn't sure how tight security would be. Do I have to check in? Show a credit card? Proof of ID? Can I really use this paper pass in the digital age? I had held off on solidifying a user of the second pass in case I needed it, but my friend and bandmate Gary, a Reds fan by birth, Cubs fan by choice, agreed to meet me at the Sheraton and give the free pass a try.

I arrived during the top of the second inning (6:30, the opening ceremonies started at 6) to find Gary already IN the convention. No pass needed. It's a damned free-for-all up in there. To reiterate. Gary secured entry to the Cubs convention without a valid pass. The octogenarians who guard the box seats at Wrigley Field are at the convention, working the event, supposedly guarding the paying customers like my sister, but Gary got all the way into the opening ceremony with no lanyard or thick stocked, blue printed, paper rectangle. Scandal!

Upon arrival, I immediately gave Gary my extra pass to make his presence legal, feeling the fool for having worried about the possibility of being caught with two passes issued for a purchase of one.

Sorry to bury the lede. But the headline should read. "You Can Go to the Cubs Convention For Free!" Just don't blame me if your shifty eyes get caught.

So what is the Cubs convention? Well, from my vantage point, the opening ceremonies looked like this... 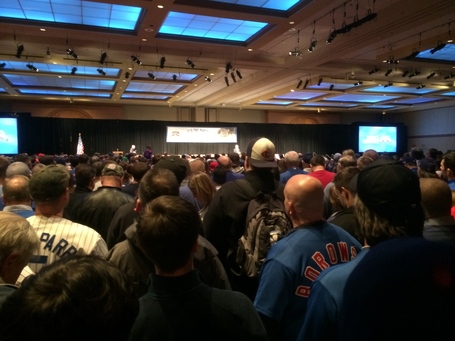 So I moved to the other side, and saw this…the Double Santo! 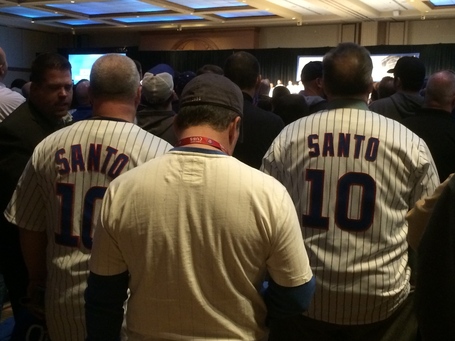 Needless to say, I was late for a good view. I couldn't hear, either. Luckily, people got bored with the presentation, and I was able to find a pocket of audibility by which to hear the introduction of the Cubs players in attendance. The introductions were basically a popularity contest by applause-o-meter, which was won hands down by Derrek Lee. Of course old timers like Ernie Banks, Billy Williams and Randy Hundley got a respectfully boisterous applause, but the real enthusiasm was behind Lee and Ted Lilly -- the players we rooted for when the Cubs were last contenders. 2008 feels like ages ago doesn't it?

A side note: Pat Hughes accidentally skipped Ron Cey during the introductions, and Cey was announced to confused onlookers after King Cub Ernie Banks's thunderous welcome. Though missed by most in attendance, It was as awkward a moment as Cey's running stride.

A WGN video presentation, complete with a lackluster sing-a-long of "Go-Cubs-Go" concluded the opening ceremony, and then we were off on an autograph scavenger hunt!

Gary and I lined up in front of an empty table, wondering which Cubs great would show up to sign our scavenger hunt map. And seven minutes late, in strode Dwight Smith (Cubs outfielder from 1989-93). 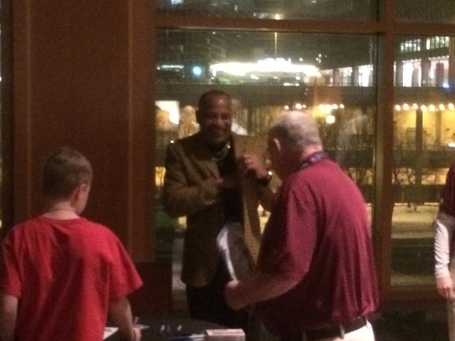 But why would I want Dwight Smith to sign a scavenger hunt map? What a waste of all of our energies! Surely I had something more hilarious he could sign. I searched my wallet and came up with this…. 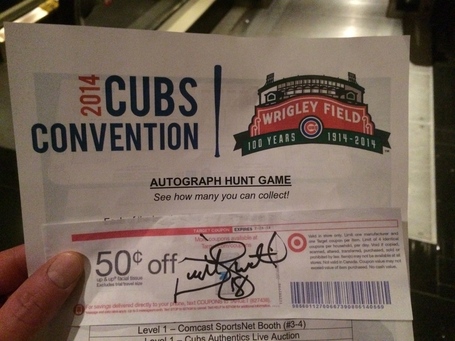 Dwight Smith signed a 50 cents off facial tissues coupon from Target. Let's hope the rules are clearer for instant replay than for the Autograph Hunt Game.

So then we went downstairs, and saw another line, stood in it, asked who the guy signing autographs was, and was utterly shocked by the answer. See if you know. Who is this? 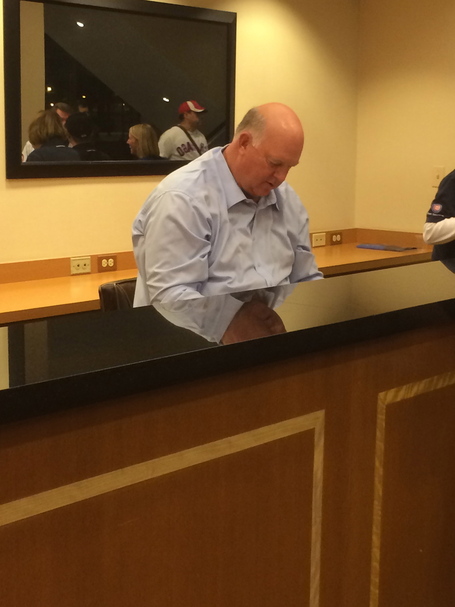 Same guy as this guy. 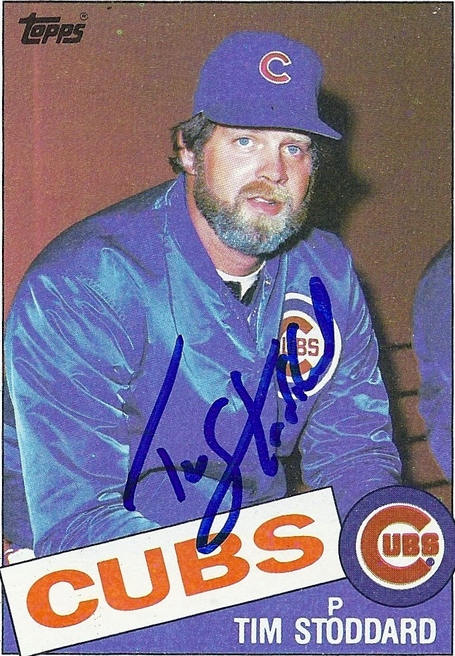 In person, Tim Stoddard is huge! I felt dwarfed. And he was sitting. Plus, did you know that Stoddard is one of only two men to have played in the NCAA's Final Four and a World Series? He was also a vital member of my 10-year-old heartbreaking 1984 Chicago Cubs.

I didn't have the cojones to ask Stoddard to sign the Target coupon, so I had him sign my scavenger hunt sheet instead.

I did get one more player to sign my Target coupon, but I didn't even know who he was. I then realized why maybe Wrigley needs a giant video scoreboard. I had no idea what any of the Cubs look like up close, because I'm either at the game, or listening on the radio. Just not a TV guy.

There were so many autograph hungry fans far more ambitious than me, lugging around giant baseballs with scores of autographs on them, also memory books, and baseball cards, and there I was with a stupid Target coupon. I felt like a jerk! So I gave up the hunt, and went into the merchandise room.

This was my favorite part of Friday night's festivities. I met Lee Smith! 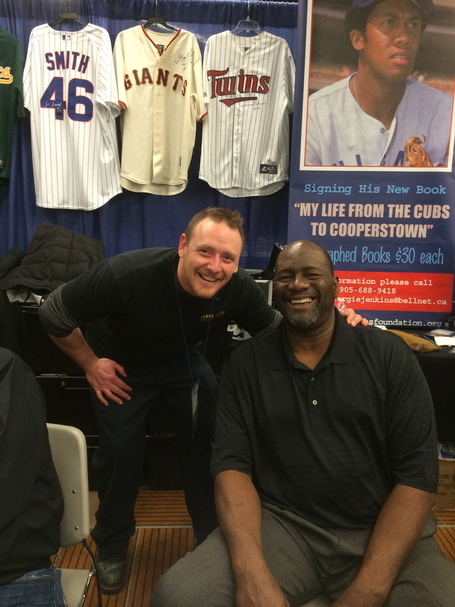 And Gary got a great deal on a Kosuke Fukudome jersey! 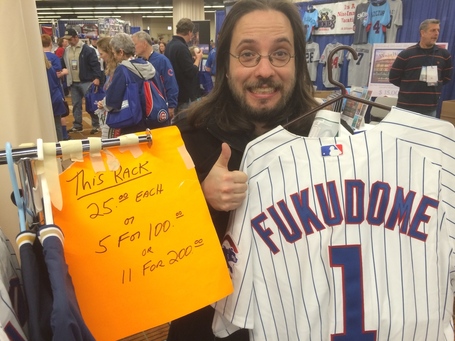 Incidentally, if you're in the market for an authentic "Game Worn" jersey, you can purchase an autographed "Dale Sveum" for about ⅓ the price of a non-game-worn jersey. Better act now, they're flying off the shelves! 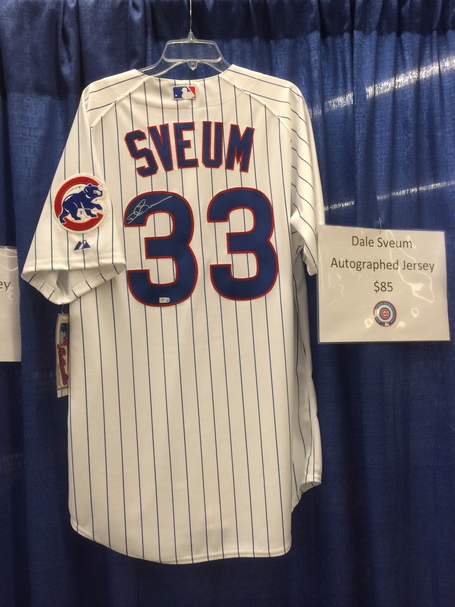 It was around the Sveum jersey I realized that I had lost my autographed Target coupon and scavenger hunt sheet! The last I remembered having it was over by Lee Smith, so we went back over there. Smith was still there, sitting between Gaylord Perry and Rollie Fingers, autographing pictures and balls for charity, but my Target coupon was nowhere to be found! My guess is Gaylord Perry took the opportunity to steal my Dwight Smith, Tim Stoddard, and Player to be Named Later autographs while I was being photographed with Lee Smith. Or was it Rollie Fingers that stole them? His name is "Fingers", after all. Criminal.

Having failed at the scavenger hunt, there was nothing left to do but to watch a giant TV. Gary and I watched about 45 minutes of a Wrigley Field 100-year film in the main ballroom, but we didn't have chairs and could only see half the screen. We decided to hit a dive bar near the red line instead of waiting around for the 10:30 Budweiser Toast. We might have stayed had they served Old Style.

As I'm writing this, it's 2 a.m., and the Ricketts Family Forum starts at 9. Those Cubs owners are some smart cookies -- scheduling their little talk back session when guys like me are still in bed. I'll be lucky if I make it to Cubs Jeopardy at 11.

There's one thing I am sure of. You can go to the Cubs convention this weekend. And you can probably sneak in for free. Just don't blame me if you get caught.