BCB's Danny Rockett returned to the Sheraton for a second day of Cubs related mayhem.

Day two of the Cubs convention began by finding the game piece I had received with my "Welcome Office Depot" promotional bag, on my kitchen floor, which entitled me to a guaranteed autograph at 1 p.m. on Saturday. I hadn't bothered to check who was signing at that time, as I'm not really an autograph guy, but upon further inquiry, I learned that I was entitled to a Kerry Wood autograph! Kerry Wood! Guaranteed! I hadn't planned on showing up until 2 p.m., when WGN's Kathy and Judy were to host a forum on the Cubs players personal lives. But a Kerry Wood autograph enticed me out the door an hour early. Maybe I am an autograph guy after all.

After a long delay on the Red Line, at of all places, Addison. 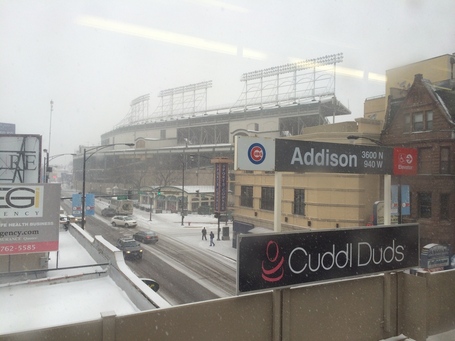 I got there as fast as the CTA could manage, and made it to the autograph line 15 minutes late, only to find out that Kerry Wood was a no-show, and unfortunately replaced with Ryan Sweeney. Cue sad trombone noise. Wah wah wah….. So the one time ever in my life I've showed up to get an autograph, the guy wasn't even there. Oh well... Ryan Sweeney it is. 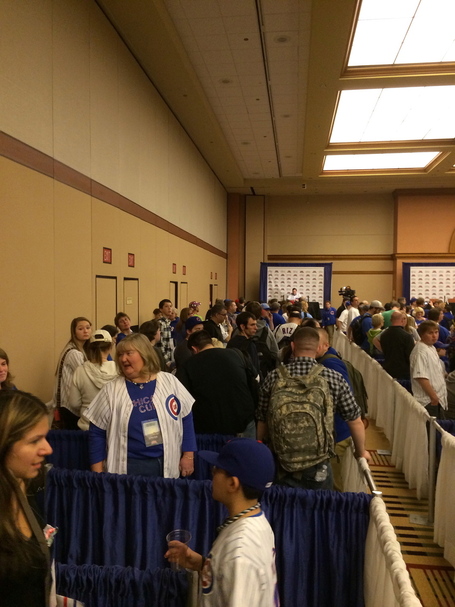 Ryan Sweeney hasn't seen a line like this since he volunteered at his fraternity's charity kissing booth! 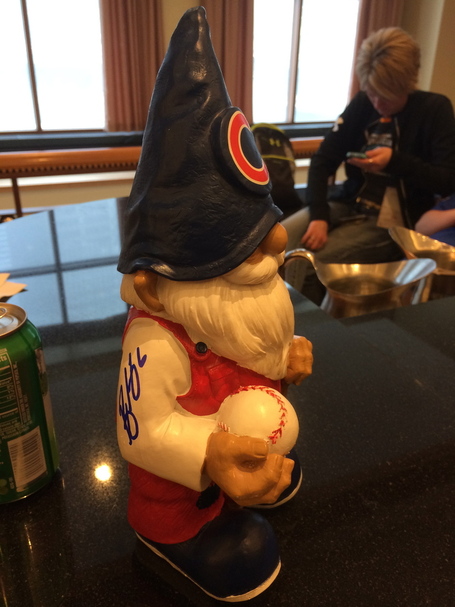 Having felt like a jerk for having Dwight Smith sign my 50 cents off Target coupon the night before, I came prepared with a Cubs gnome ripe for the signing!

For kicks, I asked Sweeney to sign, "Abraham Lincoln" or "Not Kerry Wood" on my gnome. The ushers who were guarding Sweeney thought my 'fake signature' joke was funny, but Sweeney did not. I actually felt kinda bad for the Sweeney, having to deal with the public all day. I mean, which one of us does not leave the house and say "Look at all these morons in my way! People are the worst!" And here's poor .266 hitting, 192 at bat having, Ryan Sweeney being asked by a middle aged blogger to write "Abraham Lincoln" on a gnome for kicks, whilst filing in for a beloved Chicago icon. Kind of a bum deal, despite the hundreds of thousands of dollars he's paid to play a game.

Who knows? Maybe Sweeney will be the next Dawson, Sandberg and Banks rolled into one? Then I won't fault him for not obliging my want of a "joke signature" on my gnome. At least he signed the arm. 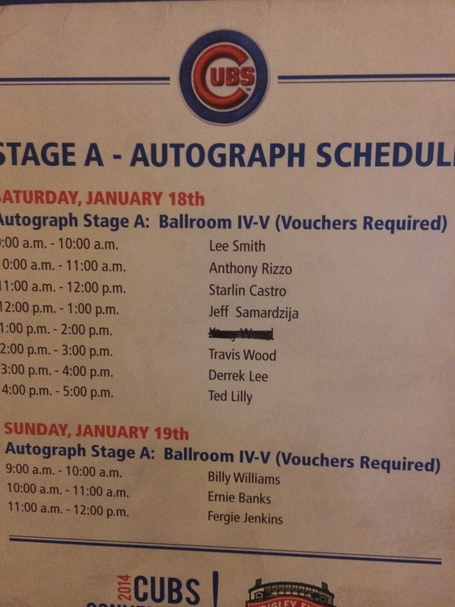 After the autograph debacle, I went on over to WGN's Kathy and Judy show, which was paneled by Jeff Samardzija, James Russell, Pedro Strop, and Mr. "I'm afraid to sign a bumpy gnome beard" Ryan Sweeney.

At this seminar I learned such fun facts as... they are all Republicans. James Russell cherishes his guns. Jeff Samardzija sometimes throws up to drink more. Pedro Strop wants a Rolex. And Ryan Sweeney paid for his wife's boob job. I don't want to get political here, but they did, and I'm just reporting on what I saw. Russell said he's a Republican because he wants to "keep all his money." And In Democratic Chicago, you couldn't cut the tension in the room with a chainsaw after that remark. The audience's demeanor seemed to be… " C'mon. You didn't just say that, right? We want to root for you and you just said something that's gonna stick in our minds every time you take the mound." Kathy and Judy realized it too, and quickly changed the subject.

I then asked the panel a boring question: "What's the most dangerous city to visit, partying-wise?", in hopes of an excuse for a failed road trip this year, but instead got the expected answer of New York City and Los Angeles, and found their answers even more boring than my question. I left before they answered completely. Grabbed a $7 beer outside the convention hall to steady my nerves for asking such a dumb question, and headed next door to the Rick Renteria/coaches forum.

My main take away from the Renteria panel was that the Cubs now have the San Diego Padres minor league management team as our Major League staff. That's of course not totally true, but the Padres were brought up a fair amount. Far too much for my taste anyway, having lived through 1984. Plus, it was stuffy and 80 degrees in the ballroom , which I'm not accustomed to since the polar vortex. So I bounced to see what kind of trouble I could get into. Luckily, upon exiting the ball room. I bumped into this guy. 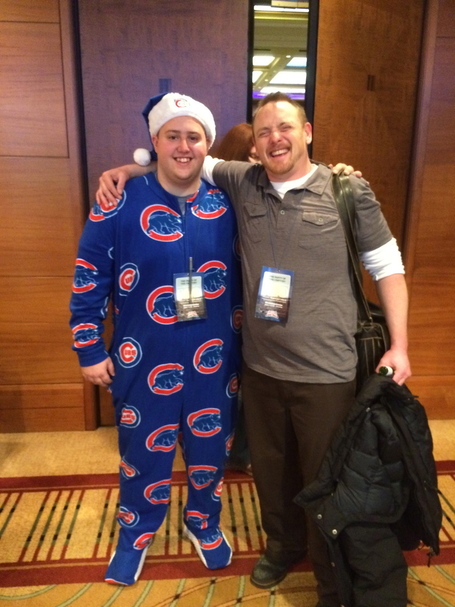 This is Jeff. His girlfriend gave him Cubs footy pajamas, and he decided to wear them to the convention. You sir, are a real American hero! And likely the most comfortable guy at the convention! Jeff and I talked about everything from "Samardzija being a number 2 or 3 on most teams," to "What if Steve Bartman wasn't a shy recluse and how he should be here at the convention cashing in on his notoriety."

Pajama Jeff's friend also made mention of meeting 80s lefty starter, and Cubs Con attendee, Steve Trout, who when asked, "What was his favorite memory from the 1984 season", responded, "I don't remember her name."

It goes without saying that the best part of the Cubs Convention is convening with like minded individuals with the same love and interest as you. At Cubs Con, you can confidently strike up a conversation with anyone, anywhere. A player. An usher. A fan. Anyone. Being here is as close to feeling a part of the Cubs family as any place I've ever been, save Wrigley Field. There is something Cubs fans know that no one else knows. An affable patience. A collective longing. Connecting us all. We are the lucky ones who know what "hope" is.

Grabbed another beer and...

Watched the Cubs play the Feud! Family Feud that is...The alumni team of Derrek Lee, Scott Eyre, Mark Prior and Mike Remlinger, edged out the 2014 Cubs in a nailbiter. The event was to be hosted by National Anthem singer Wayne Messmer, but he didn't show and it was instead MCd by Wrigley's public address announcer Andrew Belleson.

Richard Dawson he was not. Not only because he didn't kiss each contestant with a creepy old man kiss, but because he kept screwing up the game by not revealing the 'top surveyed answers' that weren't guessed after the points had been decided. He also let the game die a horrible stage death when the contestants were stumped by allowing awkward silences and unwanted blurtings from the late afternoon almost inebriated peanut gallery crowd.

But the Cubs fans were on Belleson for his "Feud" errors like I hadn't seen since Marmol's 2013 spring! Apparently, Cubs fans love baseball and Family Feud protocol equally. Personally, I'll cut Belleson some slack because he was Messmer's understudy, and he's too young and sober to try and pull off hosting a game show in the shadow of such inebriated greats as Richard Dawson. 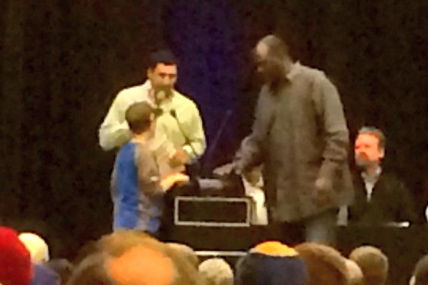 You guessed it. Little Kid.

Rick Sutcliffe, pictured blurrily in the background, also regaled the audience with an amusing anecdote about when he was on the real Family Feud in the 80s in a players vs. umpires match, and Wally Joyner was asked the question "What is the most attractive age of women?" And Joyner said "16". The audience laughed. Most nervously. It wasn't the Red Baron's finest moment, but not a disaster either for such an off color joke in a public setting.

The rest of the night was taken up by a sloppy basement hamburger and Cubs Bingo. But at least Messmer showed up to MC this time! Messmer held Cubs court and did everything a game show host should do except call my winning numbers. 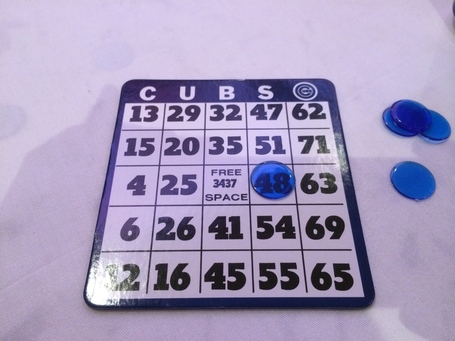 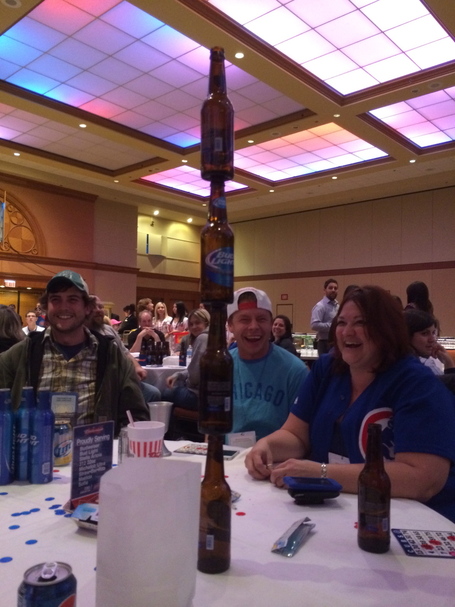 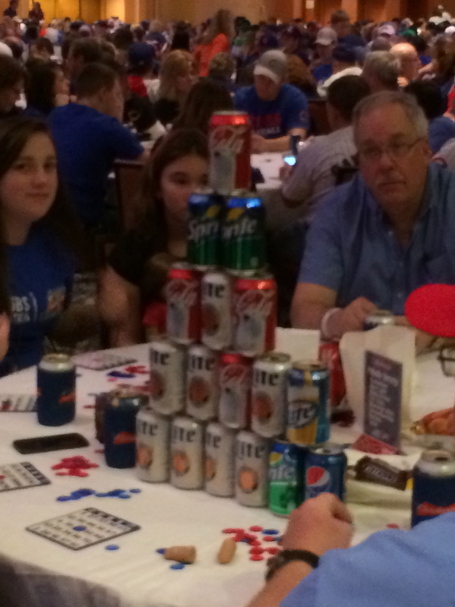 And the guy sitting next to me looked like Ryan Dempster... 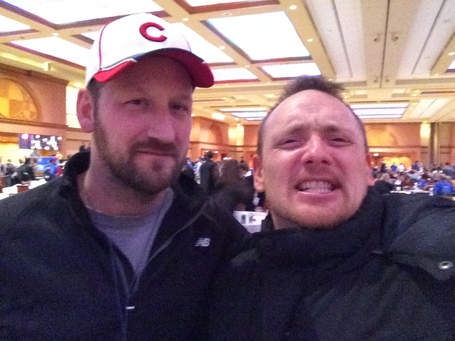 All in all, it was a successful day of being a Cubs fan in January.

Speaking of Cubs fans…. These three people deserve a championship! 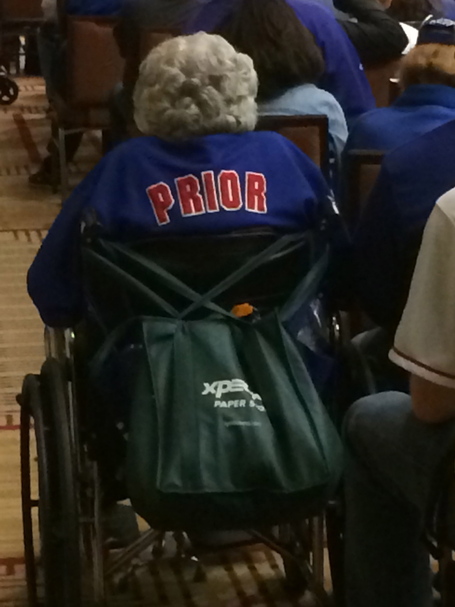 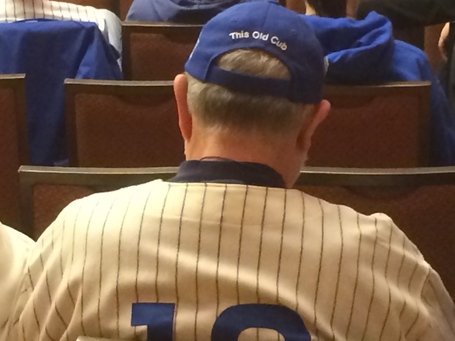 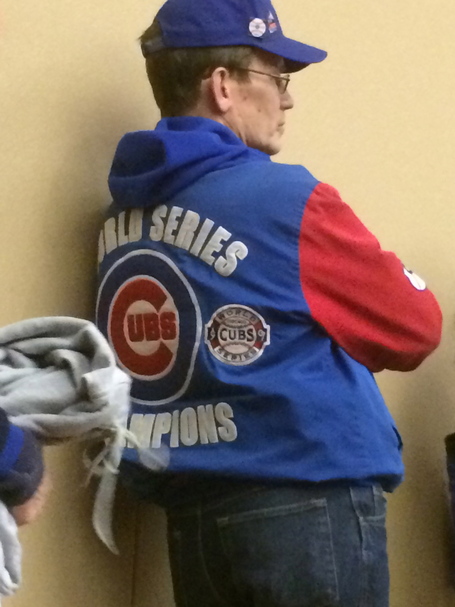