BCB's Danny Rockett's final day at Cubs Convention 2014, with many details on the 1984 reunion session.

Share All sharing options for: An Unconventional Cubs Convention Wrapup

Even though it was scheduled for 9 a.m. Sunday, there was no way I was going to sleep through the 30-year reunion of so many of the 1984 Chicago Cubs. This was the team that infected me permanently with the baseball bug and solidified my lifelong allegiance to the North Siders. 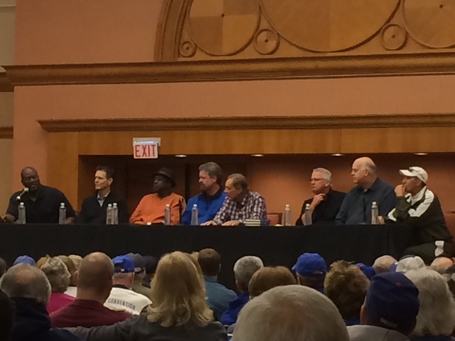 Apparently, they all feel the same as the fans who experienced that magical season with them. 1984 was truly a special year, and as unique an experience for them as teammates as it was for all of us. All were in agreement that Gary Matthews was the heart and soul of the team, and that it was a loose bunch that truly loved each other as much as Chicago loved them. Sutcliffe spun yarns of Ryne Sandberg sabotaging Gary Matthews clubhouse chair, so that when he'd sit down with his coffee and cigarette (I guess the players used to smoke in the clubhouse), Matthews, who always dressed sharply would end up in a rumpled heap on the floor covered in coffee and ash. That woulda been a sight!

When asked about the NLCS loss in San Diego, the players actually sounded off the same complaints as fans I've talked to in the past. Why didn't Trout start another game? How did Game 5 slip away? How did they not go the World Series? Gary Matthews said he was recently speaking with Ryne Sandberg, and asked him how often he thinks about 1984. Sandberg replied, "Every day."

Jay Johnstone was more outspoken than the other players and blamed Jim Frey, the Cubs manager, directly. The other players didn't disagree with Johnstone either, but they were more diplomatic, saying things like "we lost and won as a team." Johnstone says otherwise, and blames Frey for the whole debacle, even suggesting they should have pushed him out of the plane at 40,000 feet on the way to San Diego. That got a good laugh.

It was also made clear that the players missed Sandberg at the panel. Sandberg is truly a void in the hearts of Cubs fans these days. Apparently, the players feel likewise.They also mentioned wishing Jody Davis was there, and that Leon Durham deserves our forgiveness for his untimely error. I ain't mad at ya Leon!

Even though the outcome of 1984 wasn't what we had all hoped for, the season is indelibly engraved in the minds and hearts of the players and fans alike. The one that got away.

Sutcliffe, inexplicably, brought up Mark Grace's recent prison stay, even though Grace had nothing to do with the 1984 team. Strange. I think Sutcliffe is something of a loose cannon. As a fellow red beard, we can be on the quirkier end of the personality spectrum. But people just sat in uncomfortable silence, as Sutcliffe made fun of Grace having to sleep in a tent in the desert. At least it was better than yesterday's Family Feud story when he made Wally Joyner look like a pedophile. Not cool, Sut. Not cool.

Matthews, Trout, and Johnstone stuck around to chat up fans and sign autographs. Matthews had the cojones to sign my gnome's topographically challenged beard, and I got to tell him how I always pretended I was him during Little League, complete with bat waving and hip swiveling in order to draw a walk. Steve Trout signed the left arm, Johnstone his back. Later Randy Hundley signed his leg, Mike Remlinger, the ball, Tim Stoddard and Dernier signed his hat, and I also gave non-Cub Rollie Fingers $20 for charity to sign my gnome's mustache -- which Dernier found hilarious. 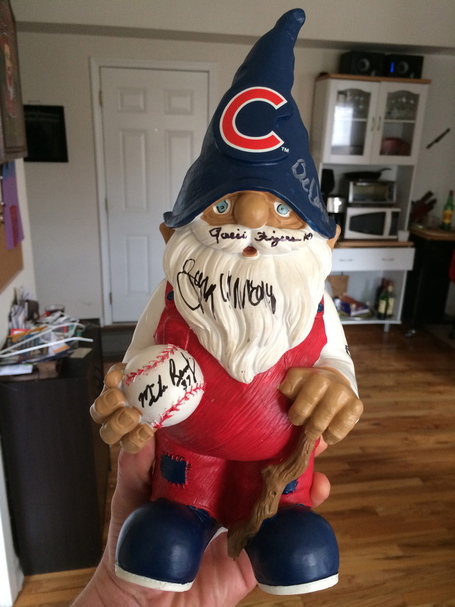 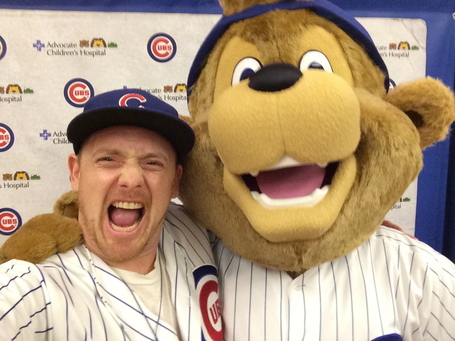 (neither of us is wearing pants…)

I headed down to the Exhibition Hall in the basement, and bought this snappy jacket (literally, it has snaps), for only $25! 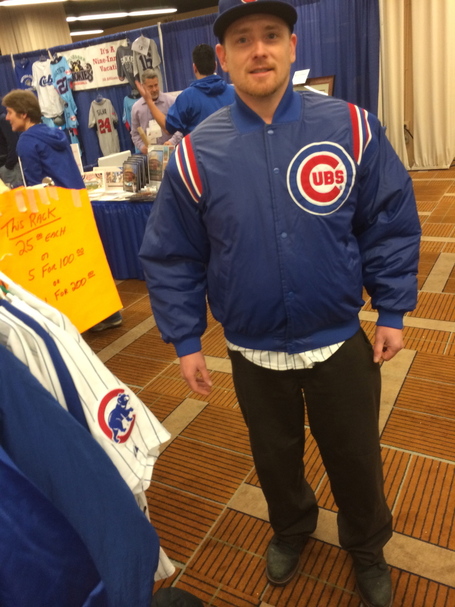 Rule number one of flea markets, card shows, and art shows: The price of all merchandise becomes increasingly cheaper as you get closer to closing time. This jacket was on the $40 rack yesterday, and then on the $25 rack an hour before the end of festivities. The dealers don't want to lug this stuff back to where they brought it. They'd rather lighten their load a bit. I was happy to oblige for a discount. You think I look like a young Jim Frey?

Down in the Exhibition Hall there are numerous vendors selling all types of Cubs related merchandise; books, autographs, clothing, and used game gear. And on Sunday morning, you could shop to the sounds of Cubs organist Gary Pressy!

I spoke with Gary briefly, as my mother is also an organist, and I can get around on the instrument as well. I always wished my mom had the Wrigley organ gig instead of working at the Catholic church. I would have enjoyed my summer days considerably more those times my mom had to bring me to work for lack of baby sitter money. That would have been sweet.

The vendors began packing up, the autograph lines dwindled, hungover fans sat disheveled in the lobby with last minute stuffed luggage, and it was clear Cubs Con 2014 was winding down. With the final stroke of Randy Hundley's sharpie on my autograph gnome's plastic red leg, it was time to call it a convention, and head back uptown and wait for Pitchers and Catchers --but not before bumping into Cubs Fan Foto photographer, Katelyn Kelley! 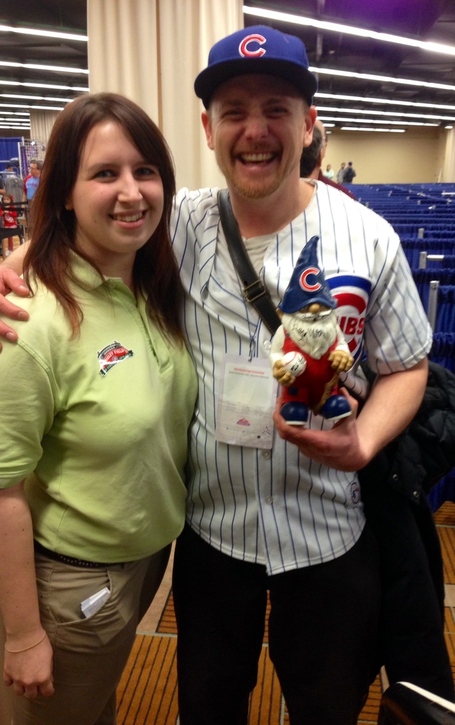 Katelyn was hired to photograph Cubs Con 2014. It's a pretty cool job, as you are working directly with the players. Katelyn posted photos of her and Rizzo, Castillo, and Clark the Cub over the weekend on Twitter. Sounds much better than my college job of the graveyard shift at a gas station, and telemarketing!

Well, that's it. That's Cubs Convention 2014 from my twisted first-timer viewpoint. I was changed by it too. I had never stood in line for an autograph before because I think I'm too cool for it. But at Cubs Con, I was the freak for not wanting to stand in long lines to meet Tim Stoddard and Steve Trout. So in the lines I stood, reminiscing with other Die Hard fans about seasons past, and our hopes for the future. The Cubs aren't just a baseball franchise. They are a way of life. The ushers and vendors. The players and broadcasters. The fans and photographers. We all showed up this weekend to celebrate the joy and pain that binds us together. The word for it is "family," and writing that word just stained my cheek with yet another Cubs tear.