Wrigley Field has hosted just one All-Star Game in the last 51 years.

Share All sharing options for: A Day In Wrigley Field History: July 10, 1990

Once Wrigley Field got lights, the Cubs were put back in the queue for hosting an All-Star Game, because since the early 1970s the game had been played in the evening for prime-time TV purposes.

Thus the 1990 ASG was granted to Wrigley, the first time the game had been there since the 1962 second All-Star affair, during that four-year blip when two games were played to add money to the players' pension fund.

As often happens at Wrigley Field, weather was a factor in all the All-Star festivities. A strong cold front had blown through Chicago the day before the Home Run Derby. That event was held in the afternoon, on a sunny, coolish-for-July day with temperatures in the low 70s and the wind blowing in, strongly. That pretty much killed the home-run show; Ryne Sandberg won it, but only five total home runs were hit in the entire Derby -- three by Sandberg and one each by Mark McGwire and Matt Williams.

The weather forecast for Tuesday night calls for a 20-percent chance of showers and thunderstorms.

"There's a chance-no, make that likely-there will be showers and thunderstorms during the game," Bob Somrek of the U.S. Weather Service in Rosemont, said Monday.

A delay this time would cause some real problems. Four American League games lost to the lockout have been rescheduled for Wednesday, cutting the All-Star break from the usual three days to two. One of those games is the "Turn Back the Clock Day" game between the White Sox and Milwaukee, which is scheduled for Wednesday afternoon at Comiskey Park.

If the All-Star Game is rained out, it will be played Wednesday night and the four AL games will be rescheduled again, league President Bobby Brown said.

Well, that's exactly what happened. There were more than just "showers and thunderstorms," there was a powerful thunderstorm that blew through in the top of the seventh inning, delaying the game for over an hour. It was a storm just about as strong as the one that rained out the first scheduled night game at Wrigley, nearly two years earlier. Jokes abounded that this was Mother Nature's revenge for scheduling night events at Wrigley Field. The only storm at Wrigley I can remember since those two, that was as bad, was the tornado-siren game in 2008, the one that had Lance Berkman running into the Astros' dugout, scared of lightning.

Jerome Holtzman's recap in the Tribune sums up the entire game in just three paragraphs:

Wrigley Field, usually a slugger's paradise, was a hitter's nightmare Tuesday night before Julio Franco's seventh-inning double off Rob Dibble powered the American League to a 2-0 victory over the National League in the 61st All-Star Game.

The victory was the third in a row and fourth in the last five games for the AL. The decisive rally began with singles by Sandy Alomar Jr. and Lance Parrish off Jeff Brantley. Franco's double, a drive to right center, followed a 1-hour-8-minute rain delay.

Strong winds accompanied by alternating light and heavy rains hobbled the offense. The NL was held to only two hits, a first-inning single by Will Clark and a single in the ninth by Lenny Dykstra. The only NL player to advance as far as second was Barry Larkin, a pinch-runner who got there on a steal.

The two hits are the fewest for any team in All-Star history. The game ended just after midnight; for many years that was the latest ending of a night game at Wrigley Field.

The All-Star Game will likely return to Wrigley Field, although not until the ballpark renovations are complete. With the lead time MLB gives for awarding the game to cities, and the fact that there are still a number of new stadiums that haven't hosted it, we might be looking at 2021 or 2023 before the All-Star Game returns to the North Side of Chicago.

Here is what the 1990 All-Star ticket and program looked like. Unlike earlier programs, that were produced by the Cubs, by 1990 MLB had taken over production of the program and it was a multi-page magazine, too many pages to reproduce here, so here are the two different covers (one was sold nationally, the other only at Wrigley) and a couple of representative interior pages. 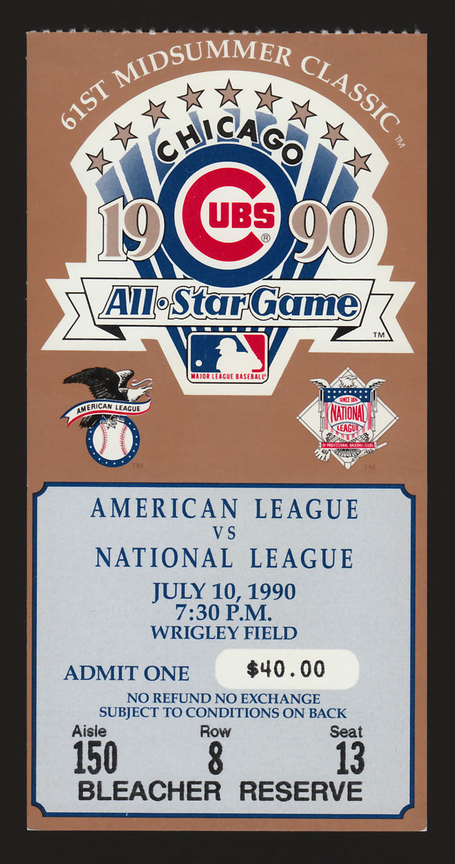 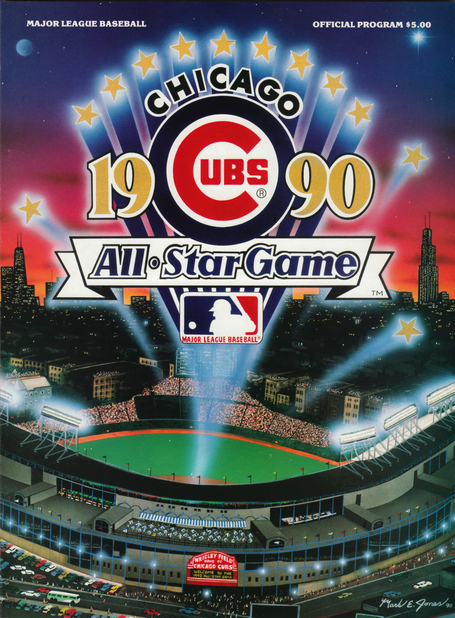 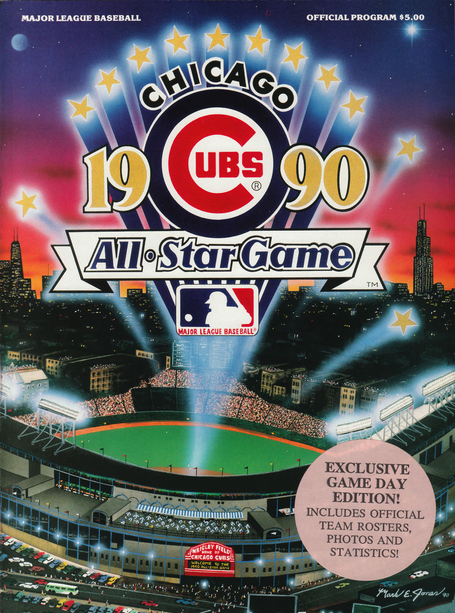 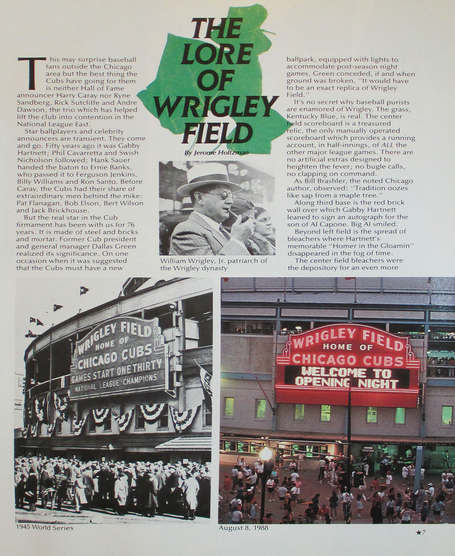 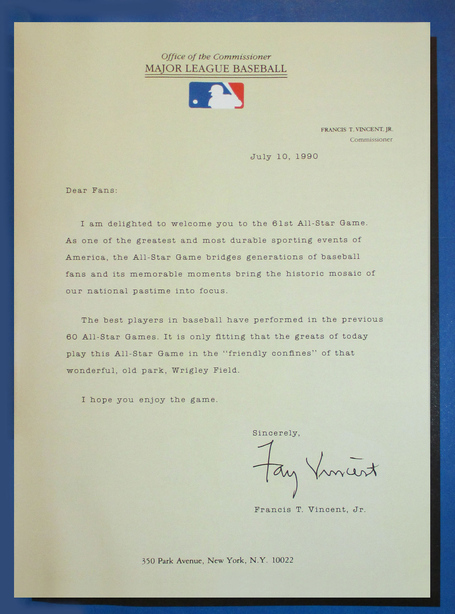