Though there was no game at Wrigley Field on this day, the place was hopping. Read on to find out why.

Share All sharing options for: A Day In Wrigley Field History: September 27, 1998

The Cubs, Mets and Giants produced one of the great postseason races of all time in 1998, though it was for a wild-card spot, not a division title.

For the last 45 days of the regular season, no more than one game separated the leader in that race from the team ranking second. The Mets led for a time, then the Cubs, and in the season's final week, the Mets fell away, the Giants went on a winning streak, and because of Brant Brown's famous dropped fly ball in Milwaukee, the Cubs and Giants entered the regular season's final day tied for the wild-card lead.

The Giants were in Colorado; the Cubs, in Houston. I don't usually do this sort of thing, but that afternoon I was invited to join some bleacher friends at a bar near Wrigley to watch both games (there was no MLB.TV or Extra Innings at the time, so this was the only way to do that).

The Cubs blew a 3-1 lead and lost 4-3 to the Astros in 11 innings. Those of us who were paying close attention to that game turned our heads to monitors showing the Giants and Rockies. The Rox needed to win to force a wild-card tiebreaker the next day at Wrigley Field.

It couldn't have been more than 30 seconds later when future Cub Neifi Perez became a hero to Cubs fans everywhere by hitting a walkoff home run for Colorado, defeating the Giants 9-8 and forcing the tiebreaker. It was about ten minutes after 5 p.m. in Chicago and that's when the scene around Wrigley Field became wild. The Tribune's Jeff Coen tells the story:

Coen wrote "fans ran through the streets," and that was no exaggeration. I left the bar to the sight of literally hundreds of people running down the middle of Clark Street to get in line at the Wrigley ticket windows. It was, sadly, an era before smartphones with cameras, or I'd have incredible photos and maybe video to share with you. All I have is the memory of seeing something I'd never seen before -- and likely never will again, because even if something like this ever happens again, the Cubs would likely only sell tickets online and by phone for such an event.

As a season-ticket holder, of course, I had a tiebreaker game ticket, and the game itself, as you well know, was memorable, with Gary Gaetti smacking a two-run homer off Mark Gardner and Mark Grace squeezing a Joe Carter popup (the last at-bat of Carter's career, incidentally) for the final out of the 5-3 Cubs tiebreaker win. Two other former Cubs -- Shawon Dunston and Rey Sanchez -- played for the Giants that day, as did future Cub (and new Cubs hitting coach for 2014) Bill Mueller.

I remember telling my bleacher group, knowing a tough division series against the Braves was coming up, "If the Cubs don't win another game, it was all worth it." They didn't -- they got swept by Atlanta -- but yes, it was all worth it, one of the most memorable years in franchise history.

The Cubs issued a special scorecard for the tiebreaker game. Here's what it looked like. (Click images to embiggen.) 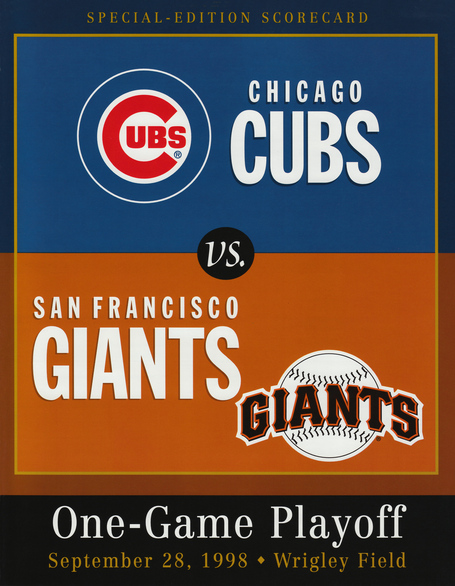 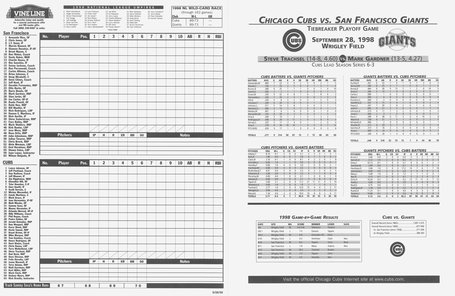 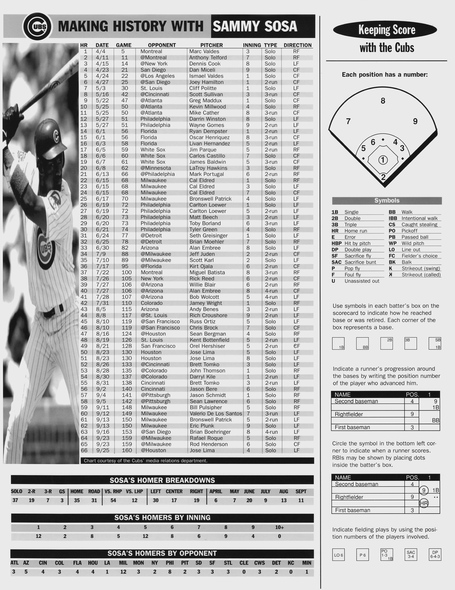