The Odyssey Of Liam Hendriks

Hendriks was a Cub for 10 days in December. But that's not the only place he's "visited" this offseason.

Share All sharing options for: The Odyssey Of Liam Hendriks

Liam Hendriks, a righthanded pitcher, was signed by the Minnesota Twins out of Australia in 2007.

Last December 13, the Cubs claimed him on waivers. Wrigley Field is about 350 air miles from Target Field. And, Hendriks had to make plans to attend spring training in Mesa -- 1,850 miles from Ft. Myers (although, a lot closer to Australia).

Ten days later -- whoops, change of plans again. Hendriks was claimed on waivers by the Baltimore Orioles. 608.1 miles, according to this distance calculator. And it's back to spring training in Florida, this time Ed Smith Stadium in Sarasota, 1,800 miles from Mesa.

So Liam packed up and reported to Orioles camp... except, today:

RHP Liam Hendriks has been claimed on waivers by Toronto.

Talk about roster Jenga. At least it's not that far from Sarasota to the Blue Jays' camp at Dunedin, just 49 miles, not even an airline flight to the lovely corporate-named Florida Auto Exchange Stadium. From there, it's a mere 1,100-mile flight to Toronto... or a short drive to Tampa, where the Blue Jays open the 2014 season.

Here's a map showing where all the major league teams Hendriks was on the roster of from December 12 through today, along with their spring-training locations. 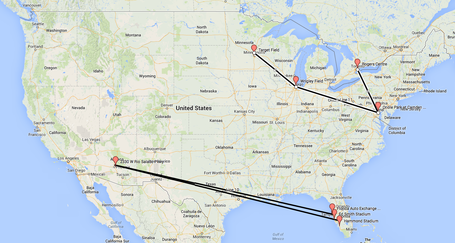 Of course, Hendriks didn't really travel to all these places. Most likely, he simply flew from his off-season home in Australia to Dunedin... which is over 10,000 miles. It's a lot easier than the odyssey Casper Wells went on last year. Wells, who is a non-roster invitee to Cubs camp this year, was in spring training with the Mariners in 2013. In early April, he was claimed by the Blue Jays on waivers (though he never played for them), waived 12 days later to the Athletics, sold one week later to the White Sox, and finally, claimed on waivers in August by the Phillies.

Just in case you think being a major-league baseball player is glamorous.

Tomorrow, I'm heading back to Cubs camp and should have more photos and video for you.