The Cubs lost. What else is new? Oh! A new ballpark!

MESA, Arizona -- The weather was fantastic. The ballpark was just as beautiful filled to capacity as I had seen it empty several times this winter.

The baseball? Well... not so much. The Cubs lost to the Diamondbacks 5-2 in the Cactus League opener in front of a new league record crowd of 14,486.

I'll have another post later today with photos from around the park, much as I did last March when HoHoKam Park hosted its final Cubs game. But first, let's talk about the baseball.

Speaking of firsts, here are the firsts for Cubs Park:

Samardzija seemed overamped today; you can excuse him for that, I suppose, being the starter at the first game in a new spring-training park. He didn't have command, although he managed to recover from a leadoff walk to strike out a pair in the first inning, then got out of the second inning with a double play.

The Cubs fashioned a 2-0 lead on the aforementioned run in the first, and another scored in the third when Valbuena reached on a dropped third strike (passed ball charged to Miguel Montero), and he was doubled in by Starlin Castro, who sliced a nice line-drive two-bagger into the gap in right-center. That's nice to see Castro have power the other way.

The Cubs' bullpen work can best be described as "inconsistent." Justin Grimm threw a decent scoreless inning. Pedro Strop didn't get scored on, either, but he issued two walks and wound up loading the bases before getting out of it on a groundout. Wesley Wright hit Parra (who also got hit by Jose Veras in the sixth), allowed Prado to double down the line in left to drive in the first run, and then allowed the long home run to right-center by Chavez. Veras also issued a walk and allowed a couple of hits before Paul Goldschmidt -- who was 0-for-3 before facing Veras -- singled in the final two runs of the afternoon.

Blake Parker had a 1-2-3 inning. Hector Rondon gave up a bloop double but struck out the side, and Alberto Cabrera allowed a one-out single, but Luis Flores -- who isn't even on the official roster, but is just helping out from the minor-league camp -- threw out the runner, so Cabrera also was untouched by scoring.

All the starters save Mike Olt and Darnell McDonald were gone after the fourth inning, getting just two at-bats each, so there's really no conclusions that can be drawn from any of the baseball that happened Thursday afternoon. The D'backs, who are a week ahead of the Cubs due to their upcoming trip to Australia, let starter Bronson Arroyo go three innings and their starters play five before they, too, were all removed.

About the ballpark, you know I have written many things previously. The park does not disappoint; sightlines are excellent no matter where you are sitting, and from the berm, with the brick behind home plate, it is reminiscent of Wrigley Field without being Wrigley Field. Talking to some other left-field regulars in Mesa, they said it felt somewhat like a "road game," and indeed it did feel somewhat like that, away from familiar surroundings, but eventually, this will feel like home.

I'll deal with the pregame ceremony and other ballpark-related things in the subsequent post with photos, but I did want to point out something they forgot to do. From the left-field berm, you cannot see the scoreboard, since it's directly behind and on top of the party deck. So, they have put the following scoreboard on the side of the left-field facade, facing left field. Can you tell what's missing? 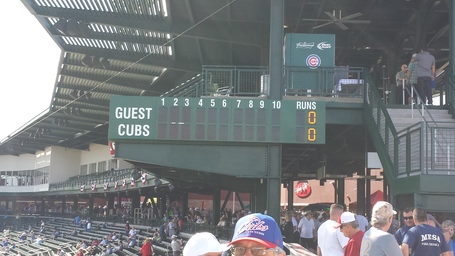 Yes, that's right. No ball/strike/out indicators. I've already spoken to Cubs management about this and they say they'll get it fixed. They've been very open about hearing about things like this, and taking suggestions.