Cubs, Giants Rained Out At Cubs Park In Mesa

It had not rained in the Phoenix area for more than two months -- not even a sprinkle. Today, there was a downpour.

Share All sharing options for: Cubs, Giants Rained Out At Cubs Park In Mesa

MESA, Arizona -- The Giants and Cubs were rained out of what is supposed to be the first of a split-squad afternoon for the Cubs; they will -- weather permitting -- take on the Diamondbacks at Talking Stick tonight.

Let me tell you about this rain, which, although there was a forecast for storms in the area much of the day Saturday, was somewhat of a surprise. You could see the storm approaching from the southwest on radar, but it looked like it was going to skirt by the park to the west (click to embiggen): 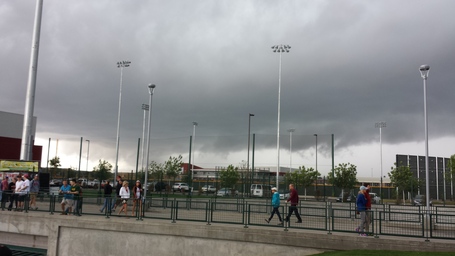 And then it took a sudden right turn, and the skies got real dark, the wind kicked up, and it rained hard. Real hard. The grounds crew had been positioned near the tarp, but didn't start rolling it out until after the rain started falling, and in those conditions, they didn't cover part of the infield near second base. I heard that about half an inch of rain fell in 30 minutes, and, since the field was so dry -- it literally has not rained in the Phoenix area in 70 days -- the rain had nowhere to go and so pooled all around the field, the infield and the warning track.

It really did look as if the storms had ended in the late morning and they'd get this one in, but this one blew up out of nowhere. It wasn't, as some hinted to me on Twitter, just so the Cubs could sell more concessions. The game was called at 1:20 p.m. -- if they had waited for things to dry out and get the field in shape and get everyone warmed up, it might have been 3 p.m. before they got started, and although there's been a different lineup posted for tonight's game, the coaching staff still has to have time to get to Talking Stick.

One good thing for fans during rain delays -- there is plenty of shelter both behind the main seating area, and also behind the left-field berm, underneath the party deck. That, at least, was convenient.

Today's crowd was somewhat smaller than Thursday's opener, although there were quite a few people in the park, disappointed they wouldn't see a game today, maybe 7,000 or 8,000. Some people were still coming in as I was leaving, and the sun was shining, only to find out the game had been called. It's cloudy again now and more storms are beginning to propagate southwest of the Phoenix area, so there's no guarantee tonight's game will be played, either. The Indians/White Sox game at Glendale was also postponed and the Brewers/Diamondbacks game at Talking Stick and Rangers/Athletics game at Phoenix had delayed starts.

You can use this thread to discuss Cubs baseball until this evening; the game preview for tonight's game -- if it's still on -- will post at 7 p.m. CT.