MLB Team License Plates: Would You Get One?

It's still a while until the Cubs play again Friday, so let's have some fun.

Share All sharing options for: MLB Team License Plates: Would You Get One?

SCOTTSDALE, Arizona -- While we await the Cubs' return to spring action Friday against the Dodgers, I thought I'd take a look at something that occurred to me the other day. The Cubs have had Illinois license plates available for a couple of years now, and I wondered: How many other teams have these from their state?

Turns out that 21 major-league teams have plates that you can get for your vehicle, generally for an additional fee on top of whatever you'd usually pay. All of them give the extra money to some charitable cause, which makes it something good for the team, and for whatever cause is benefiting.

The fout states that don't have team plates: Michigan (Tigers), Minnesota (Twins), Pennsylvania (Pirates, but see below for Phillies) and California (Giants, Athletics, Angels, Dodgers and Padres). Also, see below for why the Royals don't have an official team plate from Missouri.

Here, then, a look at all 21 team plates, with some commentary on the look of each one, broken down by MLB division. 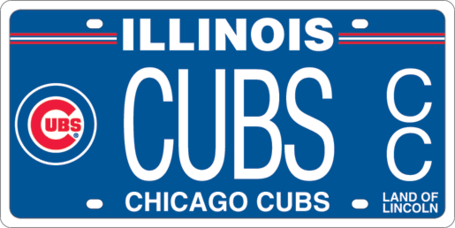 The design is simple and straightforward, and in my opinion, the lettering and colors make it look much more attractive than the standard Illinois plate. Pricing varies depending on what type of plate you want. 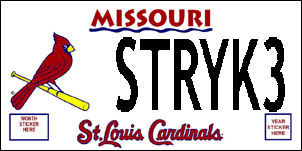 "Strike 3." Yes, that's what we would like to see Cardinals hitters do. Often. The Cardinals website has more info. The design is pretty plain, though the "MISSOURI" at the top is different from the standard Missouri plate.

Your basic Ohio plate with a Reds logo. Not sure what the "Reds on Radio" signifies at the botttom. Details here. 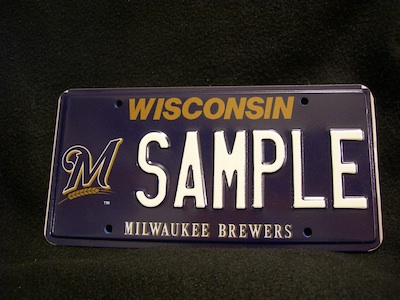 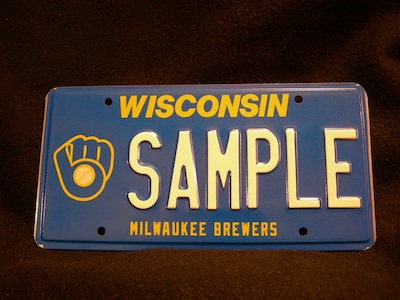 The Brewers are unique, as they are the only team with two different plate designs, one with the current Milwaukee logo, the other with the classic "ball in glove" logo -- in my opinion, they should never have changed that one, it's one of the best baseball logos ever designed. More details here. 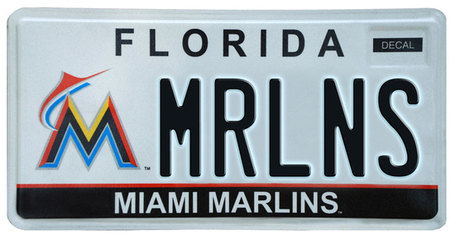 Another clean and readable plate design. Details here. I can't believe the Florida DMV approved this one. 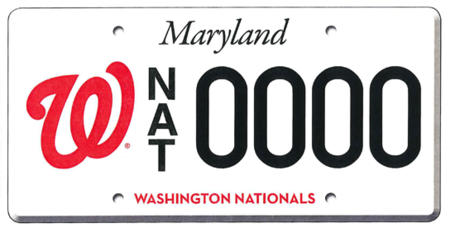 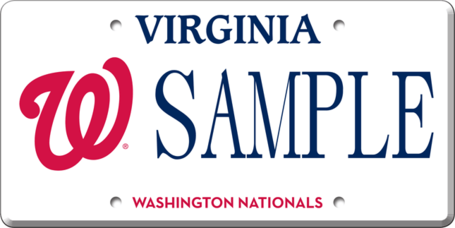 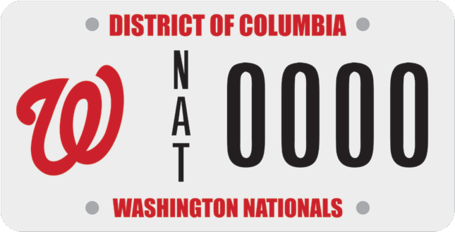 The Nats are one of two teams with plates from three localities, two states and DC. The Virginia plates were just approved and are available for the first time this month. I'm waiting for someone to apply for one of these plates with the letters "ALGREENS". Otherwise, these are all pretty plain. 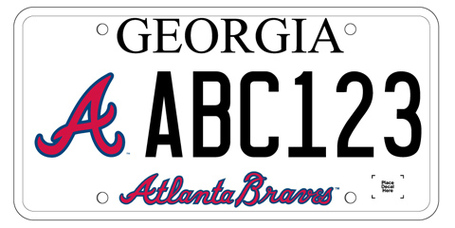 The Braves plate is much plainer than some of the standard Georgia designs, most of which revolve around peaches. Additional proceeds from these plates benefit the Braves foundation.

Well, this is odd. The home state of the Phillies, Pennsylvania, doesn't have a plate for the team, but New Jersey, across the river, does. Perhaps PA will get with the program eventually. More info here. 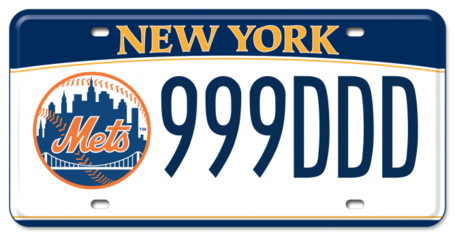 Two states have Mets plates. Here's info on how to order them from New Jersey and from New York. The NJ plate takes the basic NJ plate color scheme and design and adds the Mets logo (similar to the Phillies one above); the NY Mets plate is, in my opinion, much better looking than the standard New York license plate.

I like these, in team colors with the logo prominent and the slogan "Baseball With An Altitude." They're very different from the standard green-and-white Colorado plates. You can find more info on these plates on the Rockies website. 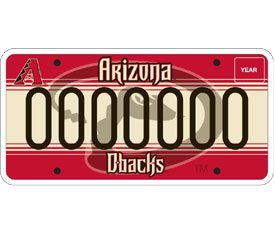 The D'backs plate, which I have seen fairly often driving around the area, is quite attractive, one of the best of the team plate designs. It's far better than this Arizona specialty plate, which with the black numbers is almost unreadable. 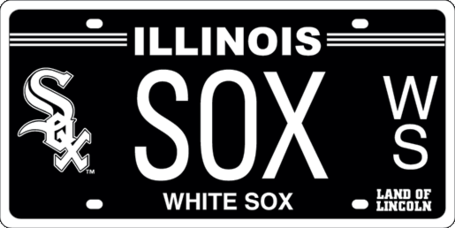 Okay, there is one. Not that you'd get it, of course.

They have one -- or had one, according to this list of Missouri specialty plates (link opens .pdf). Looking at the notes on that link, it says: "Removed 8/28/2007, no applications in 5 years."

Works pretty much the same way as the Reds plates. 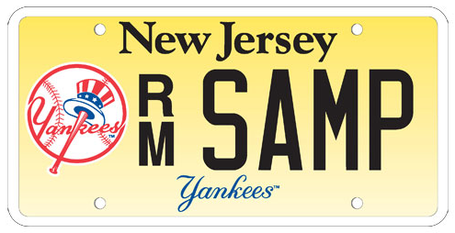 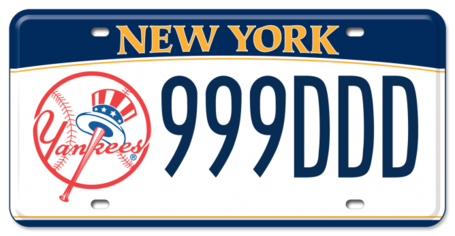 Not only can you get a Yankees plate from the state of New York and another from New Jersey, you can apparently still order one commemorating the Yankees' last World Series title in 2009.

Wonder if Illinois would... nah. 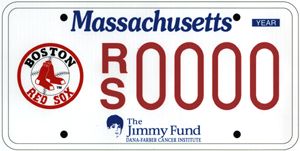 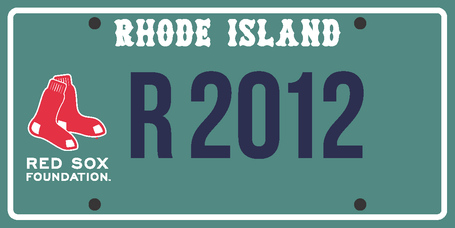 The Red Sox plate from their home state and also neighboring Connecticut and Rhode Island benefit Red Sox charities. A proposal to have a similar plate in New Hampshire was voted down about three years ago. Connecticut doesn't have a sample photo of its plate on its website. 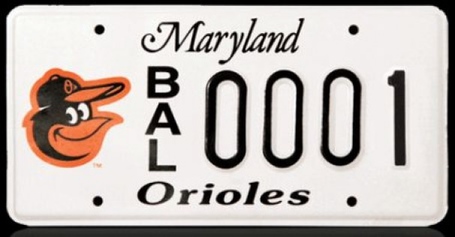 Works much the same way as the Nats plate; details on the Orioles website. 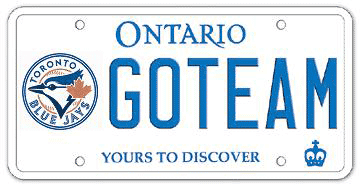 Yes, even Canadians can get in on the team license plate action. (Or, as they'd spell it in Canada, "licence plate.") Ontario has dozens of specialty plates, but all of them are basically logos slapped on their primary blue-on-white background, like the Blue Jays plate pictured above. 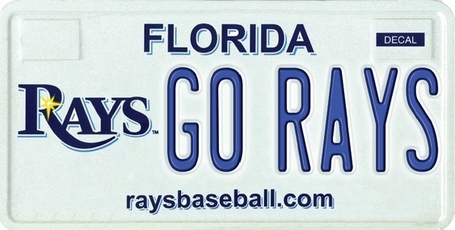 Gotta give the "best looking Florida baseball team plate" award to the Marlins. This one is pretty boring. Details here.

With the California teams out, the two Texas teams and the Mariners represent this division.

This is pretty much the standard Washington state plate, with a Mariners logo; the addition of an image of Safeco Field is a nice touch. More details here.

Texas plates have gotten boring in their new incarnation. This Astros plate isn't much of an improvement, especially considering it still bears the previous Astros logo.

The Rangers plate, in the same format as the Astros, is better-looking primarily because the Rangers logo echoes the state flag colors.

And, if you still hold on to a nearly 60-year-old fan loyalty, if you live in New York State you can get a Brooklyn Dodgers license plate

Fan loyalties run deep. Would you get a Cubs plate for your car? I, personally, don't have one, but have considered getting one. Vote in the poll, and in the comments let us know what you think is the best-looking MLB team plate.