Cubs Baseball Brings Out The Best In People

BCB's Danny Rockett continues his Spring Training adventures with the help of some incredibly generous strangers and some amazing new friends.

Share All sharing options for: Cubs Baseball Brings Out The Best In People

I was jolted from my bed early Monday morning by a 4.4 magnitude earthquake -- my first ever -- five hours after arriving to Los Angeles with my nearest and dearest friend Johnny. I laid in bed with a spinny Vegas brain, polluted by sights and sounds of slot machines and the whirlwind of new faces and personalities I've encountered over this last week of Cubs baseball in Phoenix and Las Vegas. Unfazed and excited by my first quake, my mind drifted to the joy I've experienced meeting the far-flung fans of our beloved Chicago Cubs , and the kind people who have helped make my Spring Training trip the adventure I hoped it would be.

Allow me to introduce you to some of these amazingly generous individuals.

Let me start with my Airbnb hosts Asia and Sammy. These native Arizonans are a lovely young couple who rented me a room in their cute bungalow apartment which is only two miles from new Cubs Park in Mesa. Not only was the location convenient, but they cooked for me, loaned me a bus pass and a bicycle, and also drove me to Walmart and to my one-night stay in a fleabag motel. Their generosity saved me hundreds on similarly baseball-convenient hotels and a car rental.

Sammy is hoping to enter graphic design field eventually, and currently works full time at Chipotle. He is also an excellent skateboarder. Asia is a wheeler-dealer and I suspect destined for a great career in business, as she telegraphs a strong sense for it, and a kindness that will certainly be attractive to any future employer. I wish these young lovebirds the best of luck, and hope one day to treat them to a day at Wrigley Field, as staying with them was certainly akin to a "Friendly Confines".

In the meantime, I am attempting to turn them both into Cubs fans with the help of BCB reader Stewart McVicar, who after unfortunately being rained out of two of three games on his Spring Training trip, generously offered me his Cubs Park tickets to exchange for a future game. I had hoped to exchange the tickets and go to the game with Sam and Asia, but unfortunately it was sold out, and even more unfortunately, the Cubs lost that game 13-0 to the Rockies. The only date of the entire Spring bill the box office had available, was Tuesday 3/25 which will now be Sam and Asia's first Cubs game! Cubs fans in the making! 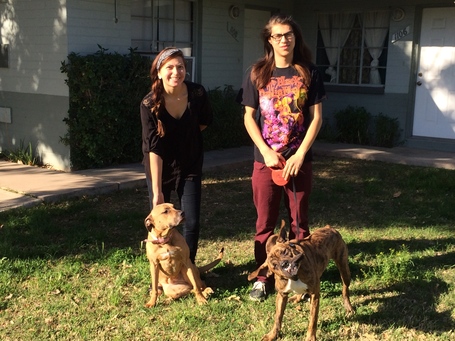 Asia and Sam with Cleo and Clifford

Another person that rocked the casbah on my trip was a woman I met Sunday at the Cubs' 6-3 victory over the New York Mets in Las Vegas. I was simply exiting the bathroom in right field, when two fun-loving ladies struck up a conversation with me, and within the first two minutes of meeting, one of the women, Ann Fredrickson, was offering me free tickets to Opening Day. With my facial expression set to a hesitant shade of "no way," Ann explained to me that she is a season-ticket holder whose job keeps her from many of the games, and just wanted to make certain the tickets would get used. So after exchanging a few emails, Ann transferred me not only two free opening day tickets in section 534, but the entire opening series against the Philadelphia Phillies. Cubs family indeed. Her friend Sher Manning, who claimed she received her surname from Peyton, was with Ann at her first ever Cubs game. I doubt it will be her last, as they were having a blast and a half. Thanks Ann! You win Cubs fan of the trip! 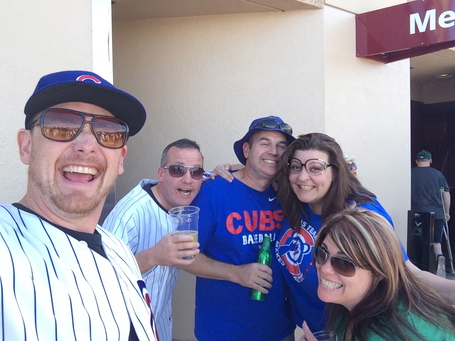 Me, Photobombers, Sher, and the generous Ann

If you follow me on Twitter, you know that I was desperately looking for a ride to the Cubs/Mariners game in Peoria last Thursday, which I did not realize was located 35 miles away from where I was staying in Phoenix. Having no luck finding a Cubs fan to take me to the game who was already going, I used my musical touring wiles and took to Craigslist to get a ride. It was there I met a young man named Mat Sherman, an inspiring young musician, busker and ASU communications student, who offered me a ride to the game in exchange for an $8 lawn ticket and $20 in gas money. He had never been to a Spring Training game before, and was really more of a Philadelphia Eagles fan than anything, but he was open to meeting new people, and experiencing life on a road less traveled. Mat and I had great conversations about music on both on the car rides, and at the game at beautiful Peoria Sports Complex where we caught a couple of innings with Al, and watched Javier Baez crush a ball over the scoreboard in left center. Unfortunately, Mat and I had to leave the game early after I lost the 50/50 raffle, as he had a job interview in the morning. But fortunately, we missed the Mariners four-run extra inning comeback.

Mat's planning on recording a studio album this summer and is practicing and writing. But he has a few originals and covers recorded and a YouTube channel. Here's Mat singing a song called "Let Them Shine" that opens with the lyrics…."Lift your head up off the ground and take a look around. What do you see?" All I saw, everywhere I looked, were incredibly generous and open people. People like Mat Sherman, who has a second interview this week!

So what's a guy with so much luck and generosity coming his way to do to keep paying it forward?

Well as luck would have it, guess who just happened to be in Vegas? Katelyn Kelley! She's the famed Cubs Fan Photographer, who I profiled here last fall. She wasn't able to stick around for the weekend games, and had to leave on Friday. We tried to link up together for a drink, but her group was exhausted and on The Strip, and I always stay near Fremont Street or "Old Vegas", where the hotels and table minimums are cheaper, the slots looser, and is walking distance from the games at Cashman Field. We were able to sneak in a quick photo near the entrance to the Paris hotel, after my friend Johnny offered them a ride to the airport. I actually drove, as Johnny had a few Bloody Marys earlier at the pool, but we had a hilariously fun if not downright silly ride with Katelyn and her friend George, an aspiring Chicago actor. George said he only had $20 in the bank left, and Katelyn wasn't too much better off, but she at least won $80 in a slot and managed to hold on to it. What happens in Vegas, stays in Vegas. Especially your money.

My only regret was not being able to get Katelyn to an In and Out Burger before her flight. I'd bring you back a burger Katelyn, but it will be covered in icicles as soon as I hit the ground in Chicago Thursday morning. Ugh. 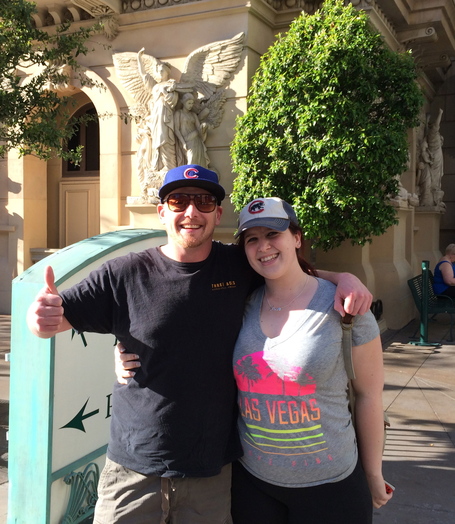 Well, I'm here in Los Angeles now, experiencing earthquakes, seeing some old friends and playing another show at Genghis Cohen Tuesday at 9:30 in Hollywood. If you're here, come on out!

If you're anywhere else, go do something fun, and talk to a few strangers. You never know what incredible humans you will meet!

Or at least come say "Hi" to me on opening day in section 534. You'll recognize me by the giant smile on my face.