The Cubs and Rangers played deep into the night Tuesday. (And early Wednesday, if you live in the Midwest.)

SURPRISE, Arizona -- The headline on this post represents the time of day the Rangers scored thew winning run in their 7-6 win over the Cubs, if you were up watching in the Chicago area.

Before that, it was the Mike Olt and Javier Baez nighttime show again, as it had been last week in Peoria. Olt and Baez slammed back-to-back home runs in a five-run third inning that appeared to put the game away. All five runs off Rangers starter Alexi Ogando were unearned after Texas third baseman Kevin Kouzmanoff booted a routine ground ball which would have ended that inning, in which the Cubs generated more runs after the homers on an RBI double by Darnell McDonald and RBI triple off the bat of Brett Jackson, who was playing his last spring game before reporting to the minor-league camp.

Ogando, in fact, would leave the game after coming to the mound for the fourth inning. The trainer and Rangers players surrounded him, and although it appeared he was leaving due to an injury, that wasn't the case:

That's.... weird. This isn't something they could have figured out during the previous inning?

Anyway, Jason Hammel made a start that we hope isn't emblematic of his regular-season performance. It was reminiscent of 2013 Edwin Jackson: a couple of good innings, then give up hits, and hits, and hits... Hammel wound up with five innings pitched, seven hits allowed and four earned runs. It wasn't that bad... but it wasn't that good, either.

So the game carried on into the late innings with the Cubs clinging to a 6-4 lead, and then Jim Adduci stepped up. If Adduci's name sounds familiar, it's because he spent parts of six (!) spring trainings with the Cubs (2007-12) without getting even so much as a September callup (he finally got one last year with the Rangers). Adduci's skill set can best be described as "a taller Sam Fuld," but Tuesday, he slammed a two-run homer off Armando Rivero to tie the game in the bottom of the eighth.

The Cubs could do little or nothing with Rangers relievers, most of whom (Neftali Feliz, Jason Frasor, Neal Cotts and Joakim Soria) will be in the Texas bullpen during the regular season. Meanwhile, the Rangers got the potential winning run to third base with one out in the ninth, but Brian Schlitter struck out Alex Rios and got Kouzmanoff to hit into a force play. During that ninth inning, Josh Vitters, who had gone into left field replacing McDonald, appeared to have a foul fly ball midway down the line caught, but he simply let it drop in front of him. For those of you who thought Vitters might have made this team as a spare-part outfielder... um, no. In the games I've seen him out there, he looks completely lost. And I'm sorry to say, I doubt he'll be anything more than a fringe major-league player, and maybe not even that.

Also in the ninth inning, this appeared:

Word on the street is 9 innings only in this one. No extras

Well... no. The teams decided to slog on into a tenth inning, this despite the fact that the Rangers were playing a day-night split-squad game. That led to this followup tweet:

And they really didn't, or at least the stadium PA announcer didn't, because at first he said, "Now pitching for the Rangers, number 96, Slack." Just "Slack," no first name. Turns out "Slack" is Ryne Slack, a 21-year-old kid who hasn't pitched above A ball. Naturally, that meant he'd set the Cubs down 1-2-3 in the top of the 10th.

One thing about sticking around to the end of an extra-inning spring-training night game is the sounds. No more than 500 people (of an announced 6,806) were in the park when the game ended. I went and sat behind the Cubs' bullpen, where I could clearly hear Lester Strode give pitching instructions (something about follow-through) to a Cubs minor leaguer wearing No. 87 (and I have no idea who that was, but he threw a few warmup pitches before sitting down). You can hear the umpire call strikes all the way across the diamond, fielders calling their teammates off fly balls, even the footfalls of players running.

The last of the 10th was thrown by the recently-cut Marcus Hatley, who proceeded to walk the leadoff hitter and then give up a single. The Rangers sacrificed those runners to second and third, about the only time a sac bunt is worth it. Then, the Cubs decided to strategize. They intentionally walked a Rangers minor leaguer named Hanser Alberto, whose highest level is two-thirds of a season at Double-A.

Me, I'd have pitched to Alberto and, presuming he could be retired, then intentionally walk Jurickson Profar, a much more dangerous hitter. Anyway, Profar hit with the bases loaded and the infield pulled in, and grounded right to first baseman Chris Coghlan, who threw out the runner at the plate. The relay back to first was way too late to get the swift Profar. which brought up Choice, who won the game for Texas as I described about 1,000 words ago.

It was entertaining, I'll give the teams that. There was also a really beautiful sunset over the ballpark just before game time: 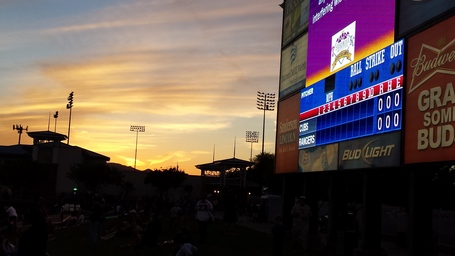 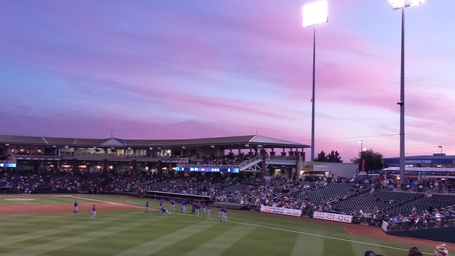 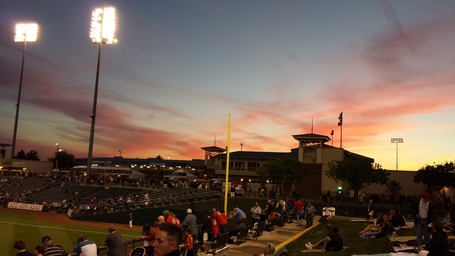 Tonight, the Cubs again play under the lights, this time at Talking Stick against the Colorado Rockies. Carlos Villanueva gets the start against Franklin Morales, and once again, you can watch live on MLB Network (via ROOT Sports Denver), beginning slightly earlier, 8:40 p.m. CT. Perhaps it won't be Zero Dark Thirty in Chicago when tonight's contest ends.