If Major League Baseball gives you, the manager, a way to potentially reverse a call, why wouldn't you use it?

SCOTTSDALE, Arizona -- The scene: the fourth inning of a baseball game. The Colorado Rockies are leading the Chicago Cubs 3-1, and DJ LeMahieu (a former Cub, of course, what other kind of player would it be in a situation like this?) has just singled and stolen second base with no one out.

He takes off for third! Here comes the throw from Cubs catcher George Kottaras to third baseman Luis Valbuena!

Safe! signals third-bae umpire Tom Woodring, a 31-year-old who is slated to work in the Pacific Coast League this year.

Not so fast, I think, as did many of the people I was sitting with Wednesday evening at Talking Stick, including my friend Rob McMillin, who took this photo of the play: 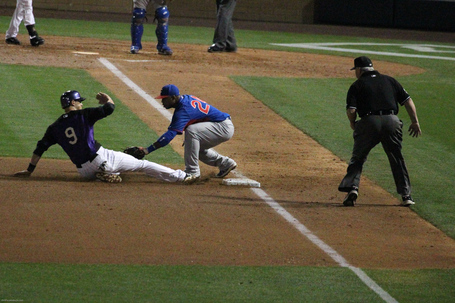 Well, that looks pretty definitive, doesn't it? Looks like Valbuena has the ball in his glove and a tag placed on LeMahieu's leg well before his foot reaches the base.

Cubs manager Rick Renteria came out of the dugout, and we all thought he was going to challenge the play. This would have been an excellent idea, given that this game was one of the designated replay-review test games during spring training.

But no! Rick headed on back to the dugout without any review taking place.

Why did this happen? Or not happen, depending on your point of view? Even if you acknowledge that photo might not be perfect and the call might have been right, why not test out the review system?

The steal was significant as LeMahieu scored moments later on a balk called on Cubs reliever Jose Veras, who was clearly unhappy about the balk call. Otherwise, Veras retired the next three hitters and the run wouldn't have scored.

In the grand scheme of things, that didn't make nor break the Rockies' 9-6 win over the Cubs in front of a huge throng (12,511) at Talking Stick, by far the largest crowd I've ever seen at that park. Charlie Blackmon hit a three-run walkoff homer off Paolo Espino, who in two spring outings has shown me only that he has no business ever appearing in a big-league game.

The other big story Wednesday evening was Javier Baez, for two reasons. First, Baez hit yet another colossal home run, this one far up on a center-field platform that forms the hitters' background at Talking Stick. It nearly hit the center-field TV camera and likely went 450 feet from the plate. It was Baez's fifth home run in 38 spring at-bats, tying him for the overall spring-training lead in homers. You'll want to have a look at this gorgeous swing:

That happened in the top of the eighth inning. In the bottom of the inning, the Rockies' Tim Wheeler hit a popup into short left field, right in between Baez and left fielder Anthony Giansanti, who must have picked up Brett Jackson's discarded No. 7 jersey off the floor of the Cubs' clubhouse the other day. (Guys like that usually wear numbers in the 90s.)

That kind of ball is clearly the outfielder's to catch. But Baez had a bead on it. From where I was sitting, it was hard to tell who was making the call for the ball, but here's what I'm thinking: Baez is the Cubs' No. 1 prospect and the jewel of the system. Giansanti was selected in the 49th round by the Athletics in 2009, never signed, was signed as an undrafted free agent by the Cubs in 2010 and has about as much chance to play for the big-league Cubs as I do.

Get out of the way, Anthony! He didn't. The two players collided. Baez caught the ball, but then fell motionless to the grass, sending waves of fear through Cubs fans everywhere. Baez lay flat on the ground for a short time, then got up and went back to shortstop, apparently fine. He completed the game with no apparent issues.

Otherwise, a few highlights from the game: Carlos Villanueva threw all right, apart from allowing a monstrous three-run homer to Carlos Gonzalez. That might not have happened if Justin Ruggiano had completed a running catch on a one-out fly ball hit by Rockies pitcher Franklin Morales. Instead, the ball bounced off his glove and into the Cubs' bullpen for an automatic double. That was followed by a single and a strikeout. The K would have ended the inning; instead Colorado came out of it with a 3-1 lead.

The Cubs bullpen did all right; Veras gave up the above-mentioned balked-in run, Pedro Strop got himself into trouble with a pair of walks and allowed a run, and Wesley Wright and Hector Rondon threw scoreless frames, which would have worked out just fine, given the sub Cubs' three-run ninth inning, highlighted by a Luis Valbuena home run. The aforementioned Giansanti tried to atone for his unneeded collision by singling in a three-run rally that gave the Cubs a 6-5 lead.

The Cubs will have a quick turnaround to an afternoon game today, their first such night-to-day transition of 2014. Jeff Samardzija will face the Seattle Mariners in Mesa, opposed by Seattle's Erasmo Ramirez. Thursday afternoon's game is again televised, this time on CSN Chicago (online via MLB.TV), though it's not part of the replay-review test. Perhaps next time the Cubs are part of such a test, the manager will actually choose to use the tools at his disposal.