Cubs 9, Diamondbacks 8: A Little Bit Of Everything

This one was a lot of fun.

Share All sharing options for: Cubs 9, Diamondbacks 8: A Little Bit Of Everything

PHOENIX, Arizona -- Games like this one, a 9-8 Cubs win over the Diamondbacks that wrapped the Cubs' spring schedule with three straight wins, remind me why I love baseball so much.

Where do I even begin? We had three replay reviews and the first overturned call in a Cubs game, catcher's interference, both teams coming from behind, great pitching, bad pitching, great fielding, bad fielding... for entertainment value alone, you couldn't beat this one.

And when the ninth inning finally came... and of all people, Lendy Castillo, who as you know is one of my "favorites," entered the game and retired three D'backs reserves for only the second save he has posted anywhere in his professional career.

Let's go back to the beginning. Jason Hammel threw four very good innings, allowing two singles, and striking out five. If he can keep up that kind of work, maybe the Cubs will get Scott Feldman-esque performance out of him. While Hammel was doing this, the Cubs fashioned a lead of 2-0, which was extended to 6-0 on a four-run sixth highlighted by Arismendy Alcantara's two-run homer, following Neil Ramirez striking out the side in the fifth, all D'backs regulars (Martin Prado, Mark Trumbo and Miguel Montero).

Then it got interesting. Jonathan Sanchez faced three hitters and retired none of them; this is why he's had so much trouble succeeding in the major leagues. He throws hard but has little command. Two runs scored, though Wesley Wright managed to stop things there. The D'backs seventh was a mess -- Marcus Hatley, who I suspect I have seen pitch for the last time, faced five hitters. All of them got hits, all of them hard-hit. Brian Schlitter, who had just made his first Opening Day roster, should have gotten out of the inning; he induced a double-play ball that Javier Baez missed stepping on second base and then made a throwing error, allowing two runs to score.

Manager Rick Renteria -- who had challenged another play earlier -- came out to request a review. "Request," because it was the seventh inning, and once the seventh starts, that's all you can do. No challenges after the seventh. The umpires granted this review -- I suspect they will for most requests after the seventh -- and confirmed the call on the field. When a review is going on, this appears on the Chase Field scoreboard: 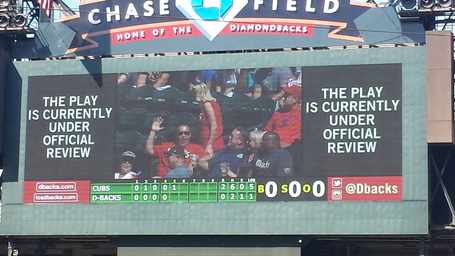 That one was from the fifth-inning challenge, which went against Renteria. There's also an announcement made over the stadium P.A.

But we weren't done with review. Three batters later, Rudy Flores singled and Mike Jacobs was called out at the plate on a nice throw from Matt Szczur, relayed by Baez, to catcher Eli Whiteside. This time, the D'backs made the request for review. The play was shown on the video board and it was clear that Jacobs' foot touched the plate before the tag was made, so the call was overturned.

I didn't find the review delays that long; if there were no review, a manager would likely come out and argue a play like this, put on some histrionics, and get himself ejected. This is a much more... civilized way to do things. I like it. We had three review delays Saturday and the total delay was about five minutes. Most games won't have any reviews; I'd think having three in one game will be very, very unusual.

So the game went on into the ninth with the D'backs leading 8-6, and the Cubs rallied, loading the bases on a single, a walk and then Chadd Krist (who I had to look up -- I had no recollection of him being the Cubs' ninth-round pick in 2012) was hit by a pitch. Christian Villanueva singled in two runs, and a sac fly by Rubi Silva scored the lead run. It might have been more, except Villanueva, who had taken second on the sac fly, strayed too far off the base when Alcantara hit a sharp line drive to center field.

Tony Campana caught it and doubled Villanueva off second to end the inning.

Then it was up to Lendy. Yes, I cheered for Lendy. Lendy's going to be 25 in a week or so and he's not likely to have many more major-league chances. But now he's got a save in a big-league ballpark, even if it is in a meaningless game.

That one was fun. Baseball ought to be fun.

I wound up sitting next to several members of Starlin Castro's family, including a woman who had a small child with her -- I think that was Starlin's son who was born late last year. Cute kid. They were all speaking Spanish, of which I didn't understand a word. Overall attendance was just a few hundred more than Friday night, on a beautiful day which is likely to be the nicest weather day the Cubs will play in for... well, vote in the poll.

And now it's for real! Monday, the Cubs are in Pittsburgh, with Jeff Samardzija scheduled to face the Pirates' Francisco Liriano . I don't have high expectations for this year, but ... well, as you've been reminding me, you never know. And a reminder of how enjoyable and unpredictable baseball can be wasn't any farther than Saturday afternoon's win.

Be sure to stop by here Sunday. There will be lots of material here tomorrow, including Cub Tracks, the final installment of Erik Peterson's Fan Favorites by the Numbers series, another article by Erik about Chicago baseball, my annual standings predictions, another essay on how I feel entering this season, and to cap it off, a game thread for the ESPN Sunday night Dodgers/Padres game.