This one doesn't count in the standings, but it still would have been nice to win.

Share All sharing options for: Cubs 5, Giants 5: Tying One On

MESA, Arizona -- Watching a spring-training "B" game brings baseball down to its basics. You can hear everything -- the umpires clearly calling strikes, fielders yelling, "I got it, I got it, I got it!" to call off their teammates, the footfalls on the basepaths... it's a very cool experience.

Not so great was the result. The Cubs wound up in a nine-inning, 5-5 tie with the Giants (link opens .pdf to my scorecard of the game), and it was one of those endings that would have you tearing your hair out if it were a regular-season game.

Chang-yong Lim, the Korean righthander who spent some time in the bullpen last September, was called on to protect a 5-3 lead in the ninth inning. This did not work out well at all. Gary Brown led off with a single. After Joe Panik flied to center, Lim threw a wild pitch and a passed ball was charged (by me, since there was no official scorer) to Luis Flores, putting Brown on third base. Chris Dominguez singled him in to make it 5-4. Then Lim struck out Angel Villalona, and now a win is one batter away with a runner on first.

With two strikes on Roger Kieschnick, one strike away from victory, Lim hit Kieschnick. After that, Lim was removed for Tony Zych, who allowed a game-tying double to Mac Williamson. The Cubs were retired 1-2-3 by Ty Blach in the bottom of the ninth, ending the game in a tie.

Nevertheless, there were some good things that happened on a beautiful, brilliantly sunny morning at Cubs Park in front of about 150 people.

Jason Hammel struggled through the first two innings, giving up four hits. The good news is that three of them didn't leave the infield, and the fourth was a soft little line drive in front of Josh Vitters in left. Hammel loaded the bases in both innings, one on a hit batter and the other on a walk, but worked his way out of the innings with strikeouts. Caveat: the Giants brought none of their starting players to this game; the only names I recognized were Kieschnick (who might become a backup outfielder) and Panik (who was the Giants' No. 1 draft pick in 2011).

Cubs relievers did a good job in the middle innings. Justin Grimm and Pedro Strop both registered two strikeouts, and those two plus Jose Veras threw three scoreless innings, the third, fourth and fifth. Hector Rondon was touched for a run in the sixth when a ball just got by Mike Olt at first; he eventually scored on a fly ball and an infield out. Tsuyoshi Wada gave up a single and a two-run homer to Kieschnick (who is a third cousin of former Cub Brooks Kieschnick). Wada had one bad inning (the seventh) and then went 1-2-3 in the eighth with two K's. Cubs pitchers struck out 10 this morning, with only one walk.

Meanwhile, the future of the Cubs was having a fine day at the plate and in the field. Matt Szczur ripped a triple off the top of the left-field wall (that probably should have been caught by Kieschnick); it scored Vitters, who had been hit by a pitch. That HBP thing seemed to be going around this morning. Four batters in all were hit, two on each side. Jorge Soler was also hit, later in the game. Szczur also laid down a really sweet bunt along the third-base line that died in the grass for a single. He eventually scored. And, Szczur also made several nice running catches in right field. It was suggested to me by Josh on Twitter that it might be better to have Szczur on the team this year as a fifth outfielder than, say, Chris Coghlan. Considering Szczur is on the 40-man roster, why not give him a shot at that role? With his speed, defensive skills and bunting ability, it would seem to be good to have someone like that on the team.

Kris Bryant doubled sharply down the left-field line and scored in the fourth and had an RBI single in the fifth. Albert Almora also had a pair of singles, and Mike Olt drew two walks.

Read the above paragraph carefully. Perhaps I can write exactly that in a major-league Cubs recap in, say, 2016 or so.

Incidentally, Bryant has had some comparisons made, at least physically, to Troy Glaus. I think his build, and his stance, remind me more of Richie Sexson. If Bryant can hit the way Sexson did -- at least until his career ended abruptly with injuries -- we'd take that, I think.

Dan Vogelbach took over at first base for Olt in the seventh inning, and, for those of you wondering what he looks like now, here he is: 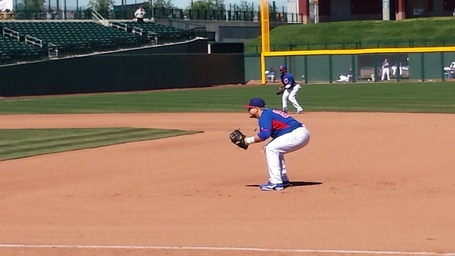 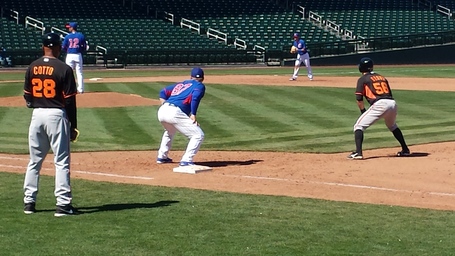 Well. What a difference. All the reports of Vogelbach losing weight and being in "the best shape of his life" (in this case, that old phrase is actually true!) are accurate. He looks great, in my view. His footwork at first base was decent, and though two innings don't make a season, it now looks as if he might actually be able to play the position. I hope the Cubs give him a lot of work at first base this year, either at Daytona or (more likely) Tennessee. (And yes, that is former Cub Henry Cotto, who is a baserunning coordinator in the Giants organization.)

This was an enjoyable way to spend the morning... and early afternoon, because even though there were no long inning breaks for television, the game ran 3:03.

And now, something I hope you'll enjoy: several short videos I shot this morning.

Despite the non-result, this was great fun -- baseball stripped down to just baseball. No PA announcer, no advertising, no scoreboard games, just the game itself. I'll recap the Cubs/Brewers game later this afternoon.