The Cubs gave up a lot of home runs Wednesday night, but won anyway.

Share All sharing options for: Cubs 7, Pirates 5: Another Little Bit Of History

Usually, when a team allows five home runs in a game, "L" is going to be the letter attached to that team's result.

Not Wednesday, and not when the five home runs are all solo shots. Fergie Jenkins used to talk about this -- the Hall of Famer allowed 484 home runs in his career (third-most all time), but 310 of them were with no one on base.

That's what Jason Hammel and Pedro Strop did Wednesday night as the Cubs beat the Pirates 7-5. Five home runs? Sure, but every one of them with no one on base. Strop, who had a bad ninth inning allowing solo shots to Pedro Alvarez and Russell Martin (both of whom had also homered off Hamnmel), made Ricky Renteria get Jose Veras up to protect the two-run lead, but Strop then struck out Neil Walker and Travis Ishikawa to end it.

The five solo homers accounting for all the Pirates runs tied a National League record. It's been done 11 other times, including by the Cubs against the Pirates almost exactly 50 years ago. Like the Pirates Wednesday night, the Cubs lost that game.

Hammel was very, very good. He retired the first 12 batters he faced, two of them on outstanding defensive plays in the fourth inning by Starlin Castro, before Alvarez led off the fifth with the first of the solo homers. That tied the game 1-1; Emilio Bonifacio had continued his ridiculous hitting with a leadoff single in the first, and scored on Justin Ruggiano's first hit of the year, a double down the left-field line. Bonifacio also doubled later in the Cubs' three-run sixth.

Before that, though, the Cubs had also scored three in the fifth, highlighted by homers from Mike Olt and Junior Lake. Lake's home run was caught on the fly right near the corner of Waveland and Kenmore by Ballhawk Dave. All told, the Cubs generated 14 hits, four of them (matching a career high) from Anthony Rizzo, who got two of his hits off lefthander Wandy Rodriguez and also had two hits to left field, the opposite way the Pirates (and most teams) play the shift against him. If he can continue to do this, that might help spread out the shift and get him even more hits.

When this team can put together hitting binges like this, they will win a lot of games. Their current run differential is -2 (29 runs scored, 31 allowed). The 31 runs allowed is tied for fifth-best in the National League with the Reds; 29 runs scored ranks tied for 10th, with the Cardinals.

The game was also completed in the second-fastest time of the eight-game season so far, a very reasonable two hours and 41 minutes, this despite being stopped for two replay reviews. The first one, regarding whether Junior Lake was safe or not at first base on a possible inning-ending double play, was pretty obviously a wrong call even to those of us watching live at Wrigley. The play was quickly overturned (less than two minutes), and the Cubs got a run out of the change. The other one, of Martin's ninth-inning home run, was also pretty obvious; the ball hit the top of the left-center field wall above the basket and bounced back onto the field. Martin, confident he had hit a home run, circled the bases, and the umpires again took little time in putting on the headsets and getting confirmation.

Here's how fans at Wrigley are informed of reviews; this is from the Lake play in the sixth inning: 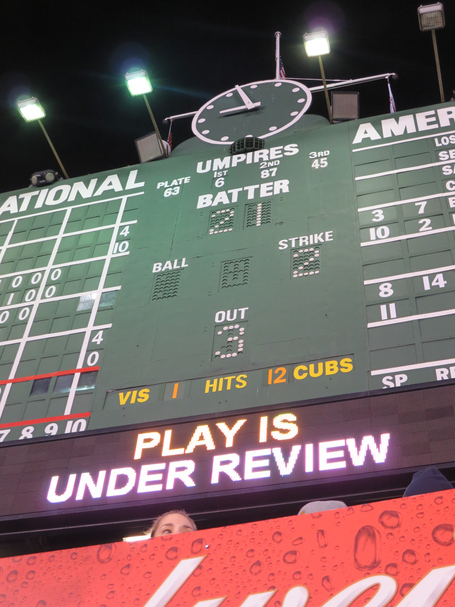 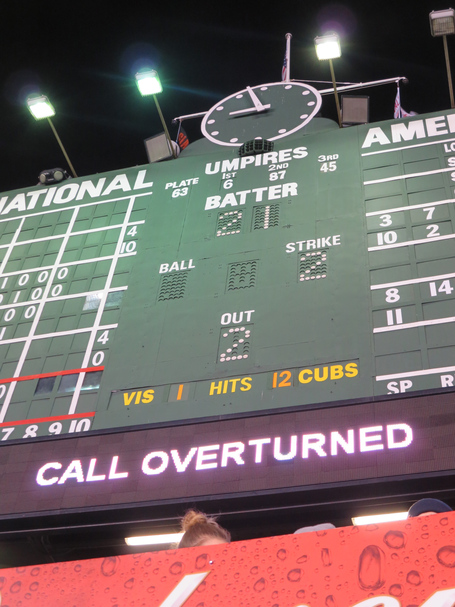 What I would like to see is the Cubs use the right-field LED board -- which does have video capability -- show the replays. Yes, it's small, but it would be better than not seeing them at all.

Thursday afternoon, the Cubs go for their first series win since September 9-11, 2013, when they take on the Pirates in the concluding game of this homestand. The game preview will post at 11:30 a.m. CT.