The Sordid Travels Of A Cubs Fan: New York Yankees

BCB's Danny Rockett with a few thoughts on why Yankees fans have got it better than Cubs fans. With lots of pics and disturbing video!

Share All sharing options for: The Sordid Travels Of A Cubs Fan: New York Yankees

One of my favorite comedians, Doug Stanhope, describes rooting for the Yankees as like going to a casino and rooting for the house. If you haven't seen the full bit, it's well worth it, unless you're squeamish about foul language. And what can you say about a team that has had so much success buying themselves talented players, and that currently sports a payroll more than twice that of the Cubs? It's easy to be jealous as a Cubs fan, not only of the Yankees' annual success, but of the fact that their front office provides fans with top notch proven talent and cheaper beer than at Wrigley Field. Yet, even with all of these feathers in their caps and a bought team, Yankees fans felt the need to yell and shout at me as I walked around their shrine like stadium that the "Cubs suck." My answer: "Yes, and?"

I'll never understand why people pick on the Cubs and their fans. We stink! You should be happy we came to your town to lose two of three, or in the case in the rain-forced doubleheader Wednesday, lose two of two and not even bother to score any runs. Honestly, the Cubs would have been better off simply skipping NYC altogether or playing against the little league teams that play across the street where the old stadium used to be. Yet, our team's baseball futility didn't stop fans from spewing vitriolic confidence my way at every turn.

I hadn't even entered the stadium yet, when I heard a chorus of boos from this lovable crew. 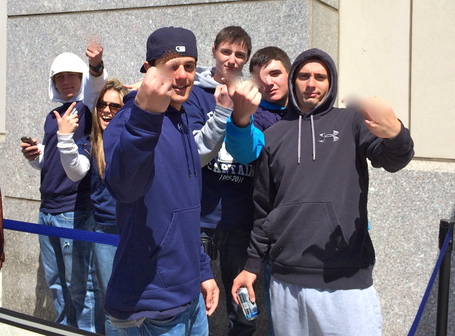 The old blurry finger salute….(the female in the group doesn't quite get the whole "give the finger" thing I guess)

It wasn't just these charming specimens either. My Cubs hat and jacket acted as a lightning rod from the moment I stepped on the 4 train, with a natively accented fellow remarking, "You know you're going to lose today, right?". I honestly told him, it was likely, but I still had hope we'd at least split the double dip. He laughed, and proceeded to complain about Mark Teixeira's constant injuries.

Two younger fellows wearing green wigs also informed me of the Cubs' suckiness as I stood in line for beer, which, I'll re-mention, is cheaper than at Wrigley. And then there was this rowdy crew.

These crazy clowns were actually a bunch of Irish dudes who sang Rugby songs the entire time. They cheered and shouted and sang for almost the entire game, so I walked up the stairs to ask them if they had any advice for Cubs fans on how we could cheer better. I get the words…"Do you…" out, and then mayhem breaks loose. They weren't even New Yorkers, yet their intense vitriolic fury fit right in with the general vibe I felt from everyone. Which was basically, "you are the enemy, you suck, prepare to die."

Even their version of Billy Cub shook me down for a dollar!

But even with all this hatred spewed at me, I admired the passion these fans have. They still clap for a strikeout when a an opposing teams batter has two strikes on him. The chants of "Let's Go Yankees!" are ubiquitous throughout the stadium. And did I mention their beer is cheaper than at Wrigley? Yes. Yes, I did… 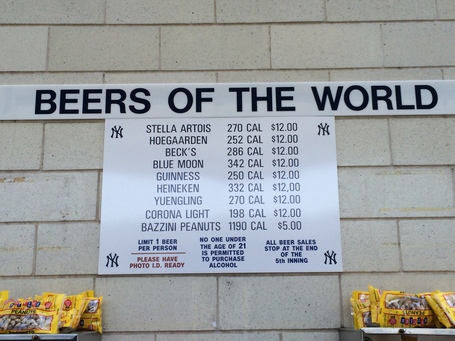 Don't let the $12 fool you! You get 24 ounces for $!2, where as the Cubs charge $8.50 for 16 ounces. And look at the selection! They have real Becks on tap, not that horrible Beck's Sapphire that tastes like Old English Malt liquor drunk from Billy Cubs' sweaty bear head. I only bring this up to point out that we are getting screwed. Not only do I have to explain to my mom who half the"I never heard of this guy" Cubs players are, even though she watches a lot of games, but Yankees fans enjoy a formidable team AND cheaper beer. Shame.

Yup. Besides our beautiful old ballpark, Yanks fans have it better all around. Better food, better beer, bigger bobble heads... 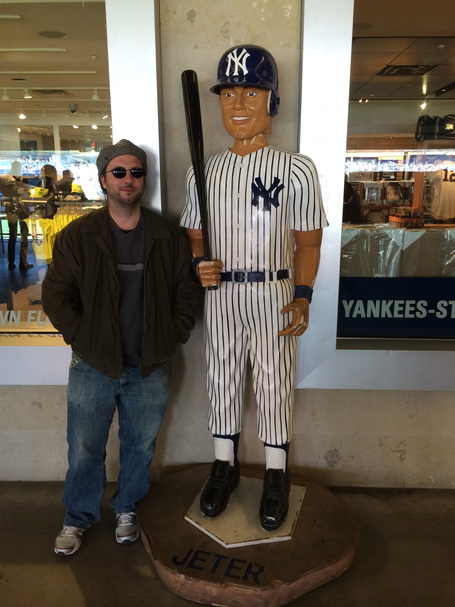 The Yankees are just better at almost everything… and it's so amazingly annoying because they constantly let you know it. They have a deep history and a bought team, yet their passionately vocal fans always let you know about it to your face. And did I mention cheaper better beer than at Wrigley? But rooting for them is still akin to rooting for the dealer at a casino, or Darth Vader while watching Star Wars.

I remarked to my friends who joined me at the nightcap that sometimes, I'm embarrassed to cheer at Wrigley. It just feels wrong, like I'm the weird one for thinking the Cubs can actually win with my cheering. My girlfriend agreed with that assessment, and many of you who have already attended a game this year can attest to the lack of passion as well. The magic is gone. No longer do people just come down to Wrigley because it's a socially fun thing to cheer the Cubs to victory. Even for the casual fan. Now, most games feel like a family funeral, I've forgotten the order of the verses to "Go Cubs Go," and we are always waiting to lose. It's been that way for awhile now. We've got to do something about it.

I'm not suggesting we become like Yankees fans and go around flipping the bird to opposing teams fans, or boo violently. I'm just saying, we used to clap with two strikes, we used to chant "Let's Go Cubbies" when we had the tying run on second in the eighth inning, and the beer used to be cheaper. Somethings gotta give.

*Here are a few more pics of my day at "Bankee" Stadium! 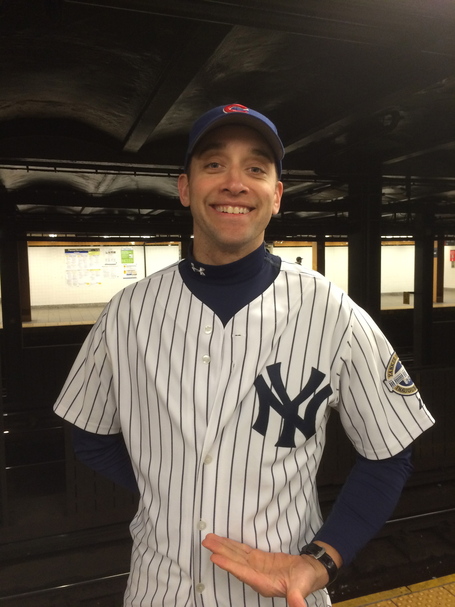 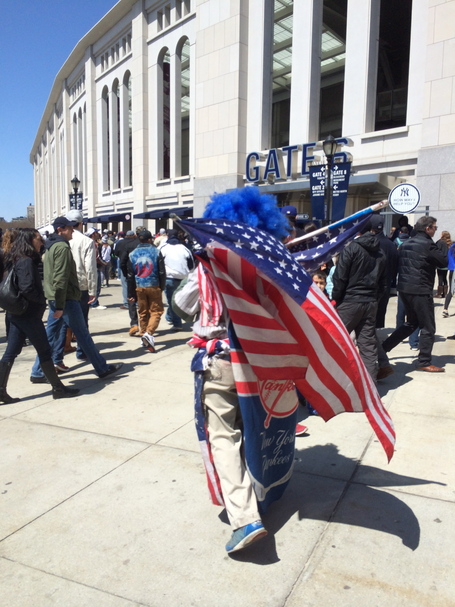 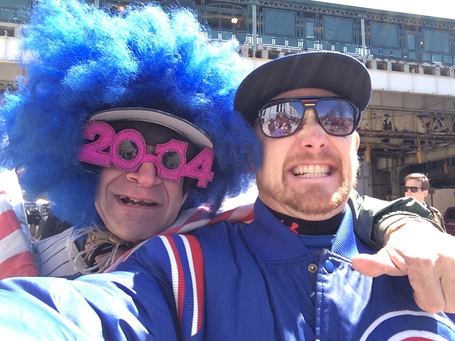 A view from the bleachers. 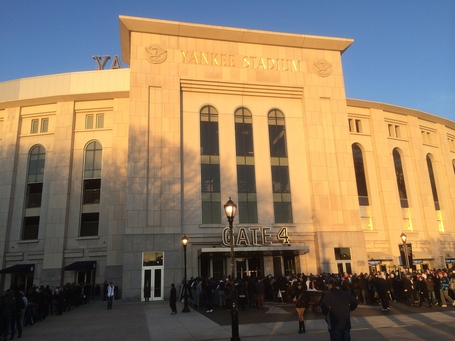 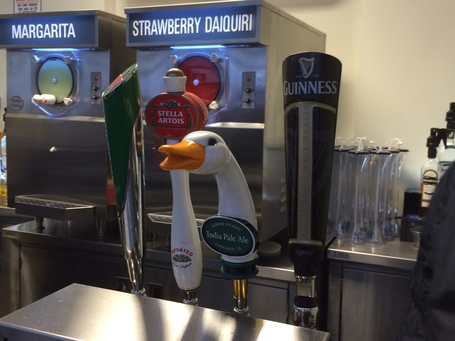 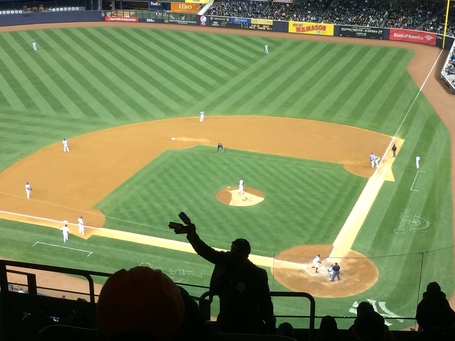 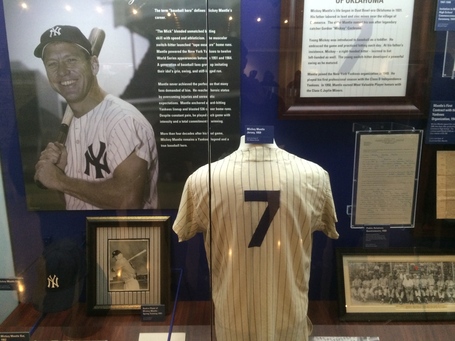 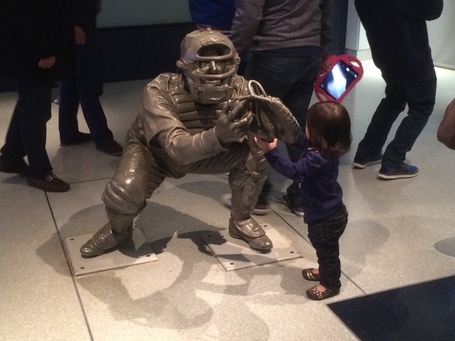 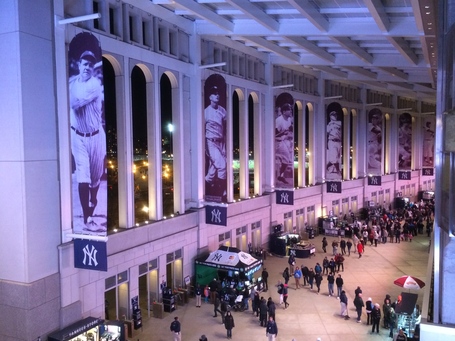 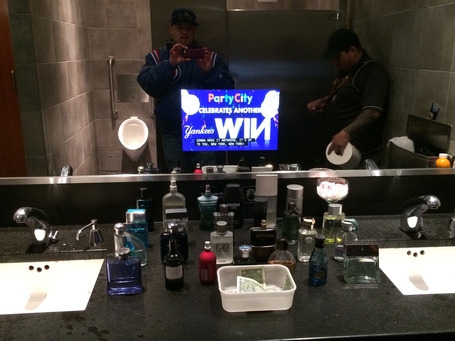 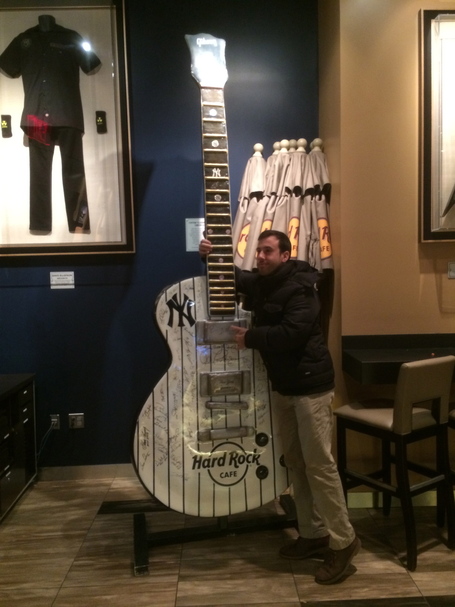