Concessions Of A Cubs Fan: The Reuben Dog

Share All sharing options for: Concessions Of A Cubs Fan: The Reuben Dog

As part of Wrigley Field's 100th Anniversary Bobblehead-Fantastic April Freeze-A-Thon, the Cubs have unveiled specialty hot dogs to coincide with every decade that our antique ballpark has stood. This weekend's series against the Reds features the salted beef upon salted cabbage upon salted beef hot dog creation: The Reuben Dog. 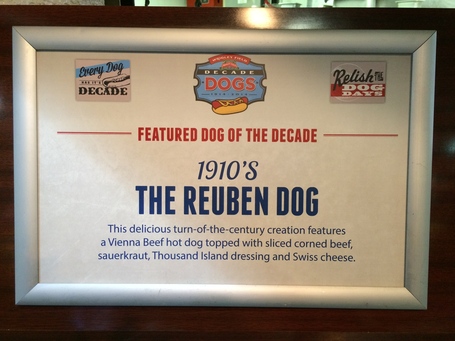 The earliest known literary reference to a Reuben is from 1926, but a New York deli claims to have invented the sandwich in 1914. There are other claimants to the corned beef creation, but apparently the Cubs hot dog chefs subscribe to this account from the 1910s to fit with the "decades" theme. No matter who invented the Reuben, they were a genius. Rye bread piled high with corned beef, topped with sauerkraut, Russian dressing, and Swiss cheese is possibly the best sandwich yet invented. I certainly can't think of another. My friends, this is a Reuben. 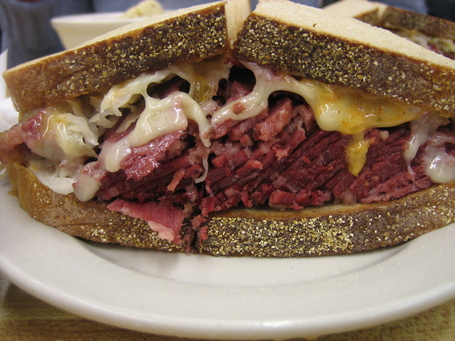 And this… is a Reuben dog. 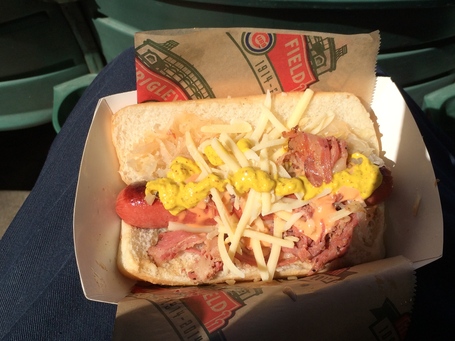 (The mustard was my addition)

What I had hoped would be a heart attack in a bun was something a bit short of that. The cheese was cold and should be melted. The corned beef was sparse, the sauerkraut cold, and the Russian dressing could only be compared to whatever orange goo resides in the squeeze bottle at the end of a Subway restaurant production line. At seven dollars, I suppose it's a relatively fair price, but a Chicago Style Dog fully loaded still beats this Reuben frank with sport peppers and neon relish tied behind it's back.

This Reuben dog is nothing to write home about. I'm not saying it's bad, but I would have gladly paid $9 for a more generous helping of corned beef and a higher quality dressing. And the cheese melt is a must. Is there such a thing as a rye hot dog bun? That could have made the sandwich better and more flavorful as well. The Reuben illusion was faint, as mostly I felt like I was eating a Gray's Papaya NY Style dog on some Manhattan street corner, with the sauerkraut and Vienna Beef being the overwhelming flavors, and as I mentioned before, the Russian dressing was a weak sauce and had no texture.

I was excited to try this hot dog ever since I first saw it advertised during Spring Training, but like many things with this team, don't believe the hype. I didn't expect the greatest Reuben Hot Dog in the world at Wrigley. Edibility is my main criteria while at the Friendly Confines, as I find the bar to be set pretty low culinarily. But I had hoped, given the 100-year, decade-weekend hot dogs hype, that the Cubs would have thrown down the gauntlet with some truly spectacular wiener creations. This is not what happened with this here Reuben dog.

However, there are more choices this year. Next time I'm going for the Pulled Pork dog. Thinking you can't go wrong when you mix meats, but we'll see. 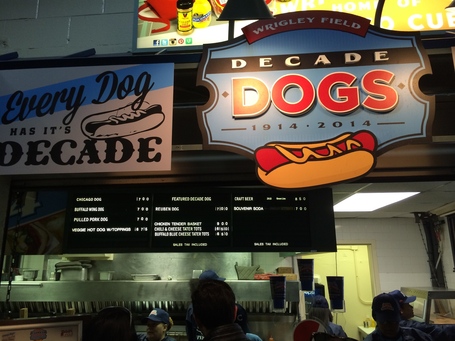