The jersey the Cubs are giving to the first 30,000 fans at the ballpark Wednesday is cool.

No matter what else happens this season, Wednesday, April 23 will be a highlight at Wrigley Field.

The 100th anniversary of the first game played at the corner of Clark & Addison is on that date, and though the game didn't involve the Cubs (who didn't move there until two years later, as you know), the team is going all-out to have a 100th-birthday bash.

Part of that celebration involves both the Cubs and the visiting Arizona Diamondbacks wearing throwback uniforms. The Cubs will wear the shirt of the Chi-Feds, the Federal League team that inhabited then-Weeghman Park in 1914 and 1915, and the D'backs will become the Kansas City Packers, the April 23, 1914 opponent, for one day.

The Cubs were nice enough to send me an advance copy of the giveaway jersey so I could show it to you.

It's really a very nice giveaway. It's a polyester replica of the actual game jersey, complete with the Wrigley Field 100 logo on the sleeve as shown above. There's no number on the back...

The one I received is an adult XL, and I'm told all the giveaway jerseys will be that size.

It's one of the coolest giveaways the Cubs have ever made; there are tickets still available and this game is definitely going to be fun. Despite a chilly weather forecast, you should try to make this one. The jersey alone is worth the trip to Wrigley Field.

Here's what the full jersey looks like -- the buttons come halfway down the front, so it's essentially a pullover, not a full button-front. 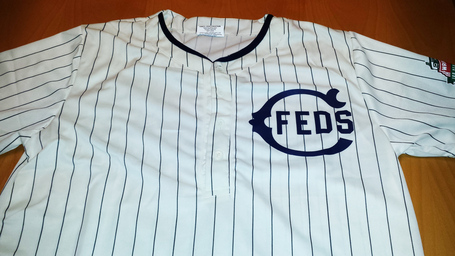