You've certainly seen this TV commercial. Did you catch the mistake?

Share All sharing options for: Cubs 'Happy Birthday' Video Has A Significant Error

You have no doubt seen this ad multiple times; it runs during most Cubs televised games, as a "Happy Birthday" to Wrigley Field, and, to promote ticket sales.

Usually, the 30-second version is the one that airs. Here's the one-minute version:

There are a lot of great, memorable scenes from Wrigley Field history in that promotional spot, including both film, video and still photos. They included some Bears photos, which is a nice touch. In general, this spot is nicely done and I like it.

Unfortunately, there's one mistake in that video (it's in both the short and long versions) that I consider to be pretty important. The point of the video is to celebrate Wrigley Field. However, there is one shot in the video that was not taken at Wrigley Field.

Scroll in to 0:14 at the video above. The shot of Ernie Banks looking off into the distance while, apparently, taking a warmup swing, had to have been taken sometime between 1953 and 1956 -- those were the only years the style of "C" on the cap was worn while Ernie was on the team.

Here, I've made a screen shot so you can see it better: 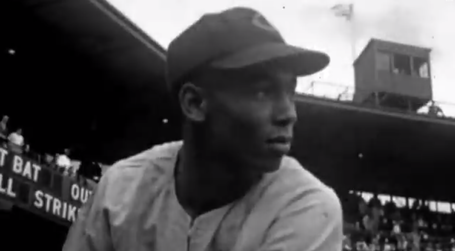 The scoreboard that you see on the left side of the image was on the upper-deck facade at the old Comiskey Park, before that facade was changed in the 1980s. You can see that board clearly in this image (scroll down the page).

So I did a little sleuthing. The Cubs and White Sox used to play exhibition games to raise money for baseball equipment for youth leagues; this series went on from 1949 through 1972, with all but two of the games in the series played at Comiskey Park (mainly because they could play at night there).

Thus I've narrowed down the date that photo was taken to either the 1954 or 1955 date noted above.

And it was taken at Comiskey Park -- there's absolutely no doubt of that, very likely during pre-game warmups.

And it really doesn't belong in a video celebrating the history of Wrigley Field.

I found this video on MLB's YouTube page, so I assume they're responsible for the content. They really ought to replace this shot with another one of Ernie, taken at Wrigley. I have a feeling they won't have much trouble finding one.