It was cold at Wrigley Field for the 100th anniversary season opener, and the Cubs lost. Did you expect something different?

Share All sharing options for: Phillies 7, Cubs 2: Same As It Ever Was

Really, that last move was a bit too much. The platoon advantage with one out to go and that big a lead? Really, Ryno? Weren't you cold enough? (Probably the first time Sandberg was ever booed at Wrigley Field.)

The Phillies defeated the Cubs 7-2 in the first Wrigley Field game of 2014, the 100th anniversary season of the ballpark, and it felt very much like so many other recent cold days in April -- a tease of a few runs scored by the Cubs, a lead, then it slowly slipping away, so that by the time the ninth inning came there was really no hope for victory.

The wind was blowing out toward right field at 23 miles per hour at game time -- you don't often see a wine speed reported at a major-league game sustained at that high a speed -- with higher gusts. Of the three home runs hit in the game, one by the Cubs (Welington Castillo) and two by the Phillies (Chase Utley and John Mayberry), only Utley's was wind-aided, a routine fly ball to right-center field that got blown into the first row of the bleachers and gave the Phillies a 3-2 lead in the fifth inning. The other two sliced through the wind and were no-doubters to left.

Travis Wood pitched well enough, getting into the seventh inning while allowing only three runs (two earned, the other unearned after an error by Luis Valbuena on a catchable line drive) while he was still in the game; a fourth run scored, charged to Wood, on a single given up by Wesley Wright. This continues Wood's 2013 trend of "quality starts," for whatever that flawed metric is worth, into 2014.

Meanwhile, the Cubs could do almost nothing with Roberto Hernandez and five Phillies relievers. After Darwin Barney singled, took second on a sacrifice and scored on a Starlin Castro single, the Cubs had just three other baserunners, all on walks.

The ballpark looked pretty good, gussied up for its 100th anniversary, and the ivy was re-placed on the left-field wall (it had been taken down due to tuckpointing work on the wall), though I wonder how well it will come back after being on the ground, covered with snow much of the winter. With the cold weather continuing, it could be a month or more before we find out. The wall itself looks good, but there are some spots where it doesn't look like the ivy was totally reattached: 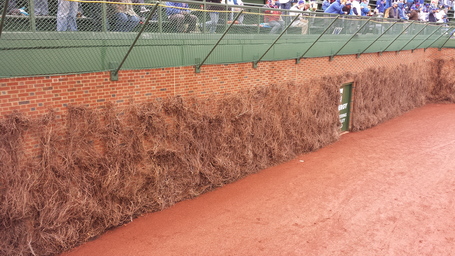 The Cubs are doing quite a bit of celebrating the 100th anniversary, as you already know; beyond what you've seen so far, they're running videos on the LED board before the game and between innings, and of course there will be the promotional dates coming up beginning this weekend with Sunday's giveaway of a Joe Tinker bobblehead. Figure to hear a lot more about this than anything else, because I expect the team on the field to struggle offensively as it did Friday afternoon. They'll have to get excellent pitching to win games this year. Sometimes that will happen... I suspect more often than not, it won't.

Saturday afternoon, when we are promised sunshine, lighter winds and temps in the 40s (which would be a distinct improvement over Friday's clouds and wind, which emptied out the upper deck beginning in the third inning; by game's end, no more than 5,000 remained in the park), it will be a matchup of Opening Day starters, Jeff Samardzija against Cole Hamels.

And perhaps Ryne Sandberg will back off on the pitching changes.