The Cubs Make Me Drink: A Photo Essay

Inebriated mayhem kicked off the 'Party of the Century' this weekend in Wrigleyville. BCB's Danny Rockett brings you face planters, angry bears and balloon hats in this photo essay.

Share All sharing options for: The Cubs Make Me Drink: A Photo Essay

Boy! That was a rough weekend! And I'm not just talking about the Cubs losing two of three in the opening series to the Phillies. During those three days, I personally witnessed three drunken face plants, saw a couple smoking weed in Terrace Reserved, heard tell of a fight between Billy Cub and a drunken bar patron (so did you, probably), and watched girls randomly make out at Wrigleyville's "The Dugout." Luckily, I was there to document much of it for you.

Opening Day started out beautifully as I walked my usual path from Uptown through the back alleys. 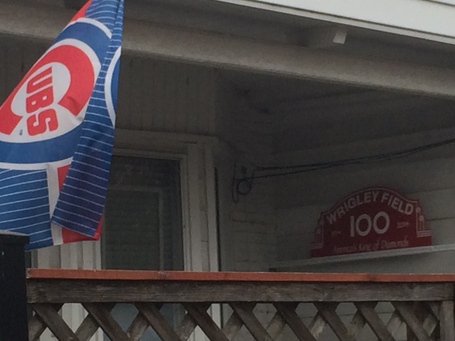 But all of this back alley neighborliness changed rapidly as I approached the stadium, where some Cubs fans had been drinking since 5:20 a.m. according to Julie DiCaro's Reflections of Opening Day, in which she complains of a smelly inebriated man and a creepy guy in an ivy costume. I didn't see or smell them, but I did see this guy. 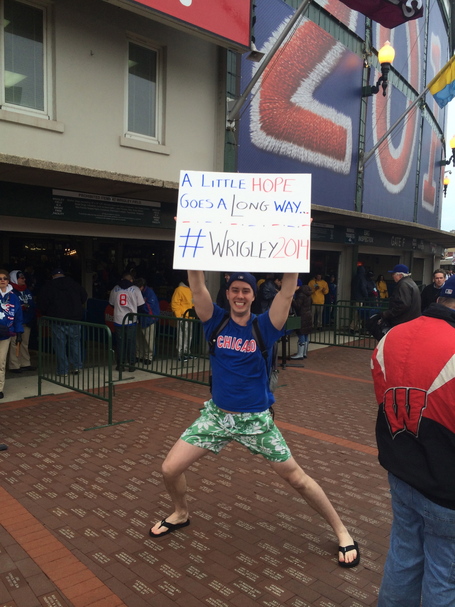 Who seems to disagree with this guy. 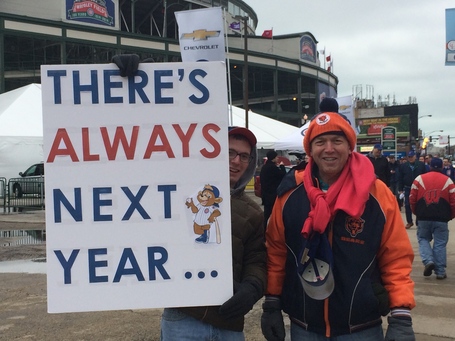 Especially about what to wear in 40 degree blustery weather...

And this "guy" seems to disagree with almost everybody! 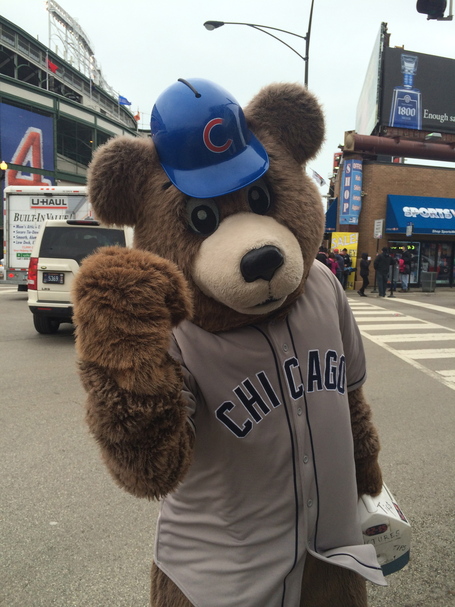 This is Billy Cub on Opening Day reacting to me asking him about how he felt about the Cubs new mascot Clark. Apparently, he was already in a fighting mood... 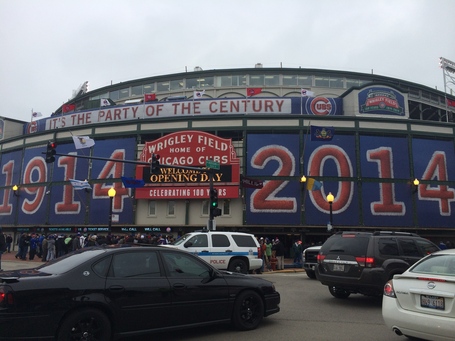 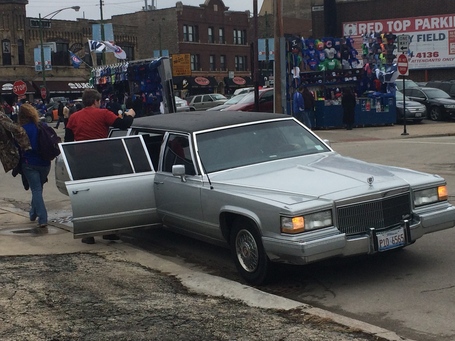 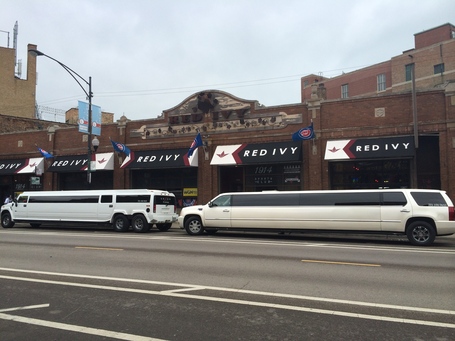 And the throngs of Cubs fans that came out to open up the 2014 season launched "The Party of the Century" by drinking booze out of fish bowls. 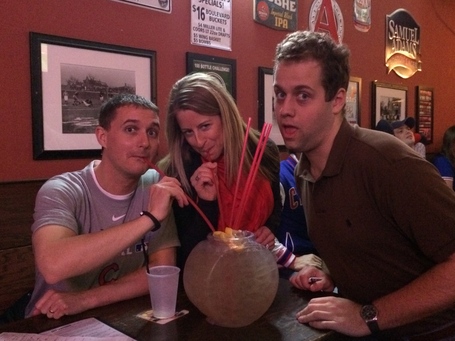 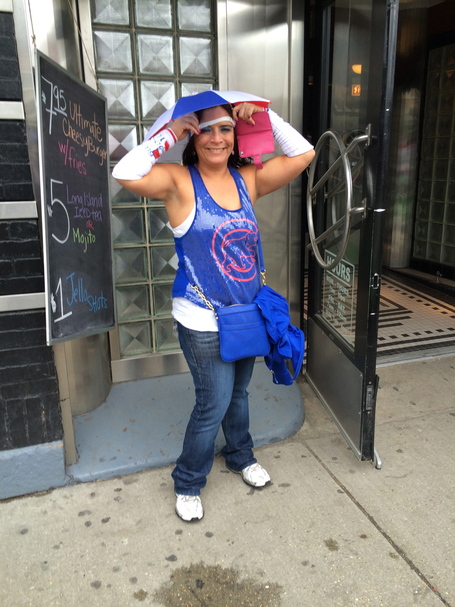 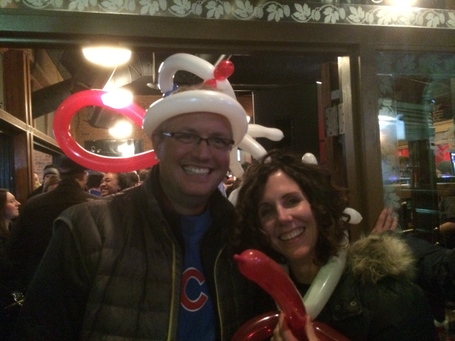 My buddy Lyle, my girlfriend and I were drinking free Allagash beer at Merkle's cause we "know a guy", so we didn't enter the freezing ballpark until the fourth inning. I had an extra ticket to the game but couldn't even give it away! Too cold, I guess. I gave it to this stranger and said it was now his responsibility to make sure it was used. 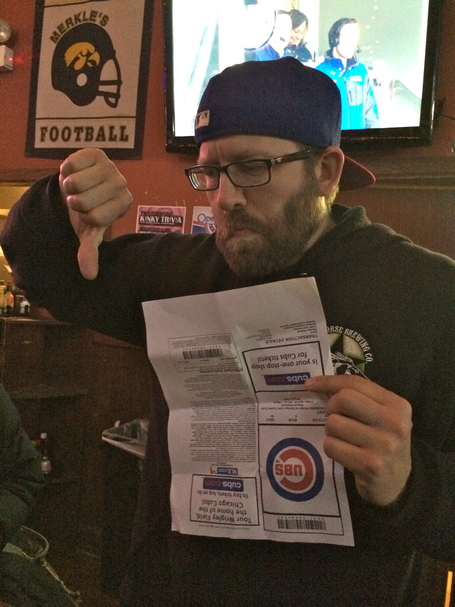 And when we did finally enter Wrigley, fueled by free pregame Allagash, we didn't even bother going upstairs to our 500 level seats, but rather walked with a purpose through the box seat tunnel past the security usher and into 100 level seats! 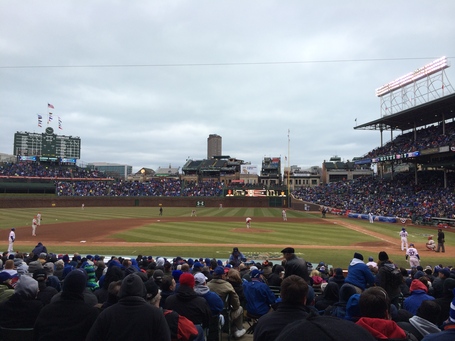 Lyle even tried his hand at sneaking into Field Box Seats.

The video's kinda crappy, but Lyle probably could have stayed behind home plate if he wanted to. The crowd was thin because it was really so incredibly cold. With the Cubs down five runs, we decided to go back to Merkle's for more free beer.

But with the Wrigleyville crowd 12 hours into binge drinking, the scene was starting to get a little ugly.

I though I was taking a photograph, but it was a movie, which I've entitled "Fallen Dawson."

The revelry continued from there. If you can call this sad scene revelry. Clark street resembled a Civil War battlefield by four o'clock. By 7 p.m. the day-drinking Cubs fans started mixing it up with the after work crowd. It was time to go.

What a day! When we all finally stumbled over to the Salt and Pepper diner for a sobering bite that evening, we were unfortunately more lit than the marquee. 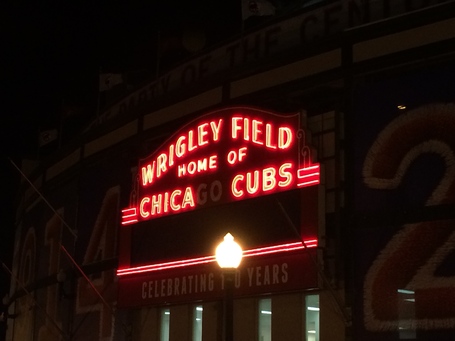 If the inebriate carnival that was Opening Day was any indication, it certainly is shaping up to be a long season. There were two more games to go. I had to remind myself. It's a marathon, not a sprint.

I went to Saturday's game with my Mom, and picked up where I left off with lunch at the Salt and Pepper diner, where a guy stood outside my booth with his friends toying with Billy Cub. 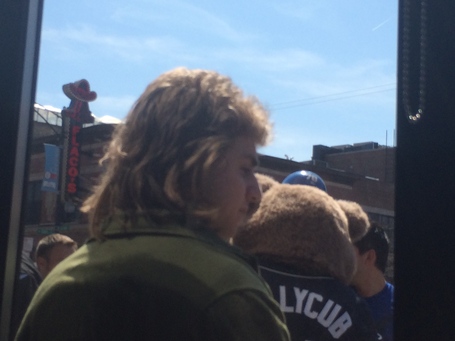 I thought Joe Perry trademarked this hairstyle in the 80's...

The whole neighborhood seemed hung over but itching to continue the 'Party of the Century'. The bars were full again, and the vulgarities loudly spewed from the mouths of pinstriped frat boys made me reminisce back to when I learned to swear at Wrigley Field. I probably wouldn't have even noticed their foul language had I not been with my mother. 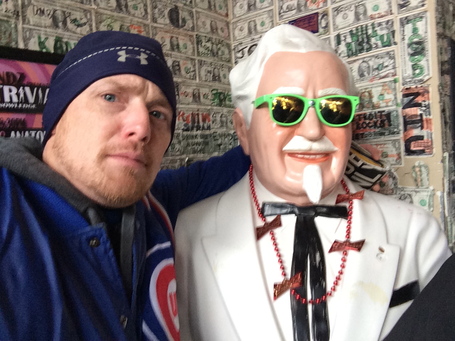 The game was cold and boring as the Cubs lost 2-0. So boring in fact, that a young couple lit up a joint behind me and Mom in Terrace Reserved. 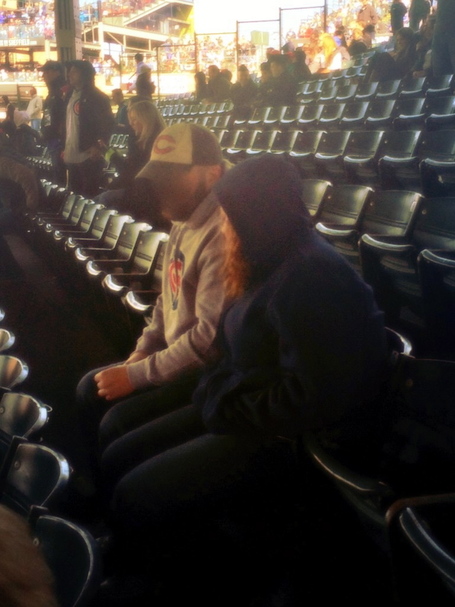 I blurred his face so he doesn't get in trouble, but the smell was unmistakable. I guess that's one way to get through this season!

That evening, unsatisfied with the Cubs shutout, I turned on MLB.TV to root against the Cardinals and the camera panned to this fan with the dirtiest, grimiest hat I've ever seen! 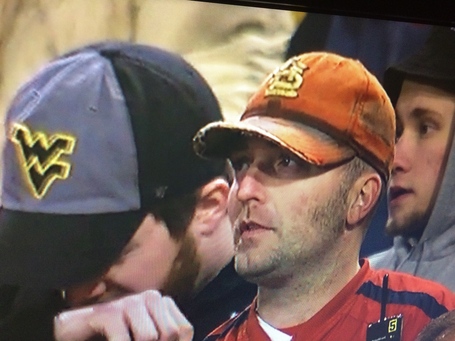 Then, news broke of the unofficial mascot Billy Cub's fistfight with a patron of a local tavern. If you haven't seen it yet... it's epic...

I couldn't wait to go down to Wrigley Sunday morning and ask Billy Cub about his fight.

All this excitement, and the game hadn't even started yet. I was surprised Billy Cub even showed up on Sunday. I would have laid low, afraid the cops would pick me up for assault. But it wouldn't be the first time I've questioned the judgment of a man in a bear costume.

I'm a creature of habit so 'The Party of the Century' continued at the Salt and Pepper with a couple of these... 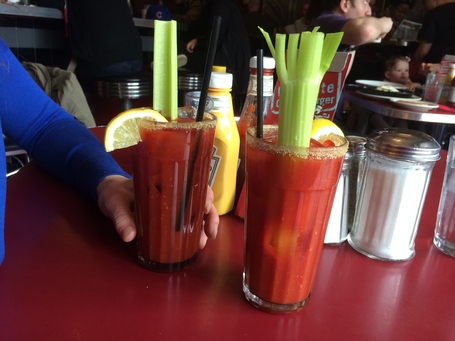 Then off to a Cubs "W" (finally) where our beloved boys in blue entertained the likes of this guy... 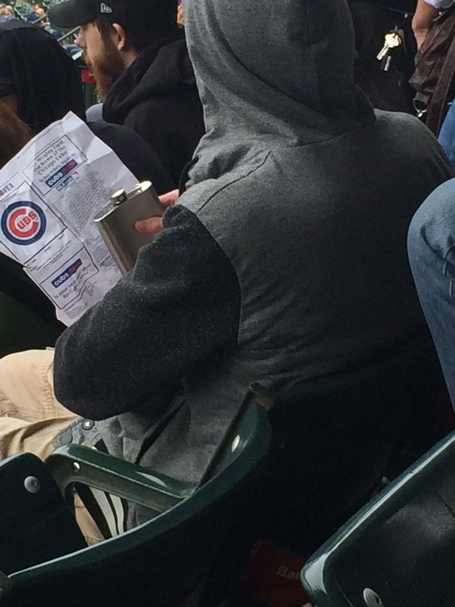 This flasked crusader is apparently not a fan of 2014's higher beer prices. $8.50 for a Goose Island and $8 for a Budweiser. A Green Line at the Captain Morgan Club now costs $10. Ouch! 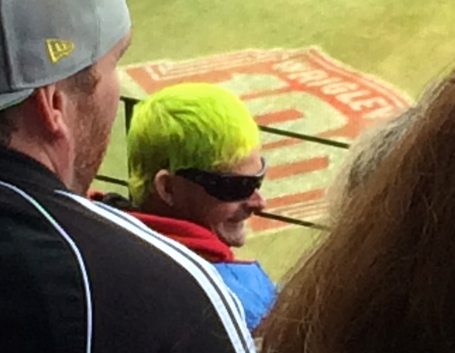 Not only does this fan have fluorescent yellow hair, but he drunkenly yelled at the Phillies players for a full inning! 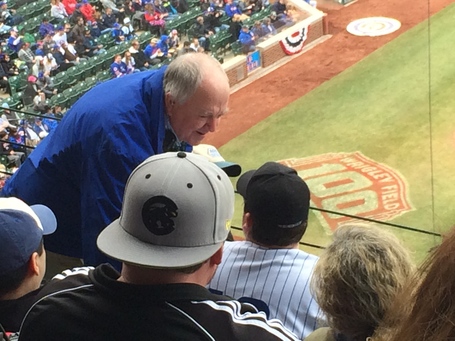 This fan was told to simmer down and had his illegal can of Red Bull confiscated. 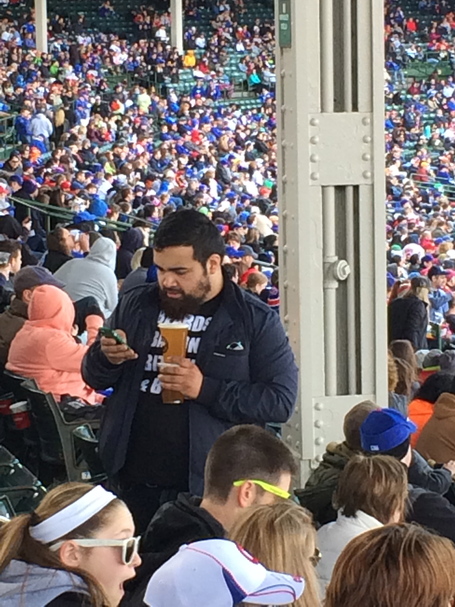 This man can hold two beers, text and advertise his life's mission... 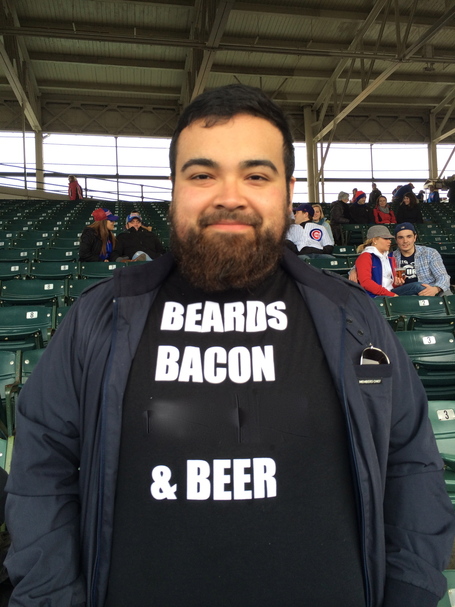 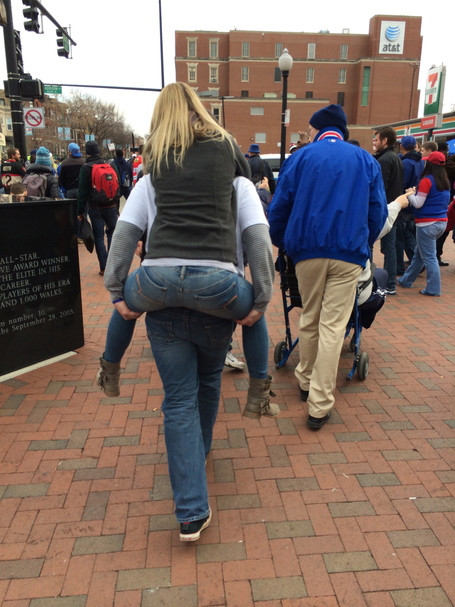 A new method of transportation after the game!

The three day 'Party of the Century' Kickoff finally wound down with a couple of Old Styles for the road at The Dugout on Addison, where these chicks were making out (and more) for and with these two guys. 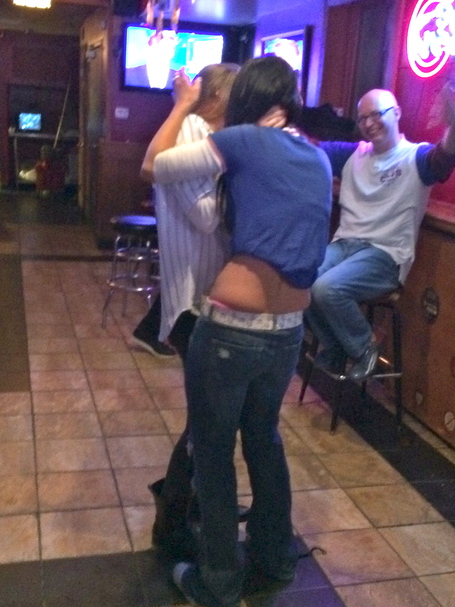 I guess they were all together. Maybe they were swingers! 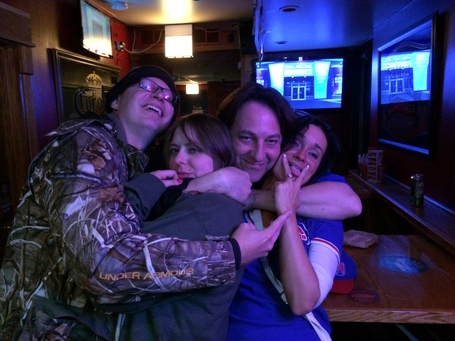 All I could think at the end of this crazy weekend besides "Did they really need to change the logo in 1948?"... 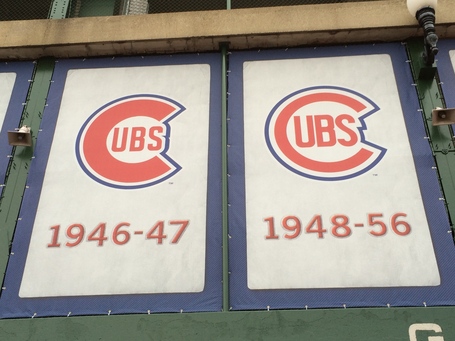 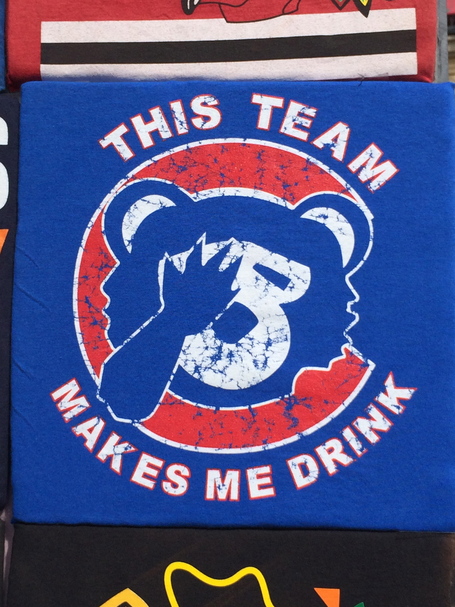