When you arrive at Wrigley Field for Friday's game, the ballpark will look... different.

I'll let you get all your "watching paint dry" jokes out of the way now. Go ahead, I'll wait.

Done? All right, then have a look at how the famous Wrigley Field marquee is being re-painted in its original color from its current iconic red look. The repaint is part of a five-year marketing deal between Benjamin Moore & Co. and the Cubs. Benjamin Moore researched the original color the marquee was painted when it was installed in 1934 -- a color they call "Mallard Green." The trim, instead of white, was gold ("French Quarter Gold", says Benjamin Moore), and the marquee will retain its new look through the upcoming homestand, when there will be other 1930s-themed events celebrating that decade, as the 100th anniversary commemorations at Wrigley continue.

A smallish crowd of maybe 50-60 people showed up on a chilly morning to watch the beginning of the painting and get T-shirts handed out by the paint company.

Truth be told, I wouldn't mind if they decided to keep it the original green-and-gold colors. It looks sharp, and... well, that was a decade when the Cubs were winning National League pennants -- two of them, in 1935 and 1938, before the marquee was painted more of a blue shade, which it remained until 1965, when it was painted the red color we're all familiar with. It's my understanding that the original green color wasn't paint, but the color of the porcelain coating of the original sign. Since then, color changes have been painted. Also, the original sign was green with gold trim and white lettering, so the white lettering is only being touched up with paint, with no color change there.

Of course, tons of Cubs souvenirs are sold with the marquee showing red, so they'd have to completely change all of those with the new/old colors if they went retro for good.

Here's some video of the beginning of the painting job, which was nearly complete when I returned around 1:30 in the afternoon to take the final four photos in the sequence above.

And here's the front and back of a card they passed out at the event, showing what the marquee will look like, along with the exact colors. 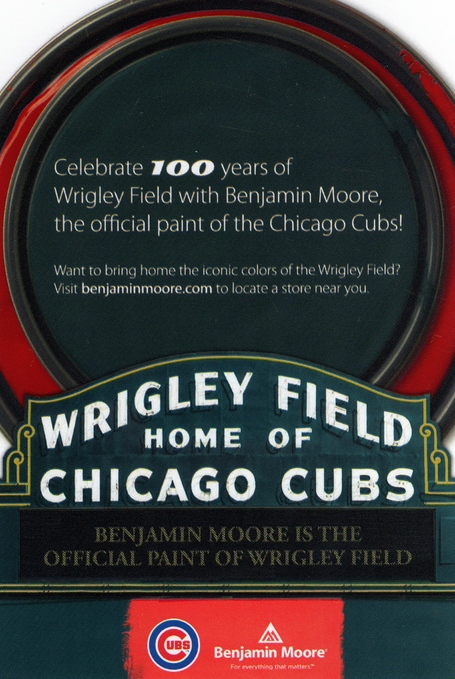 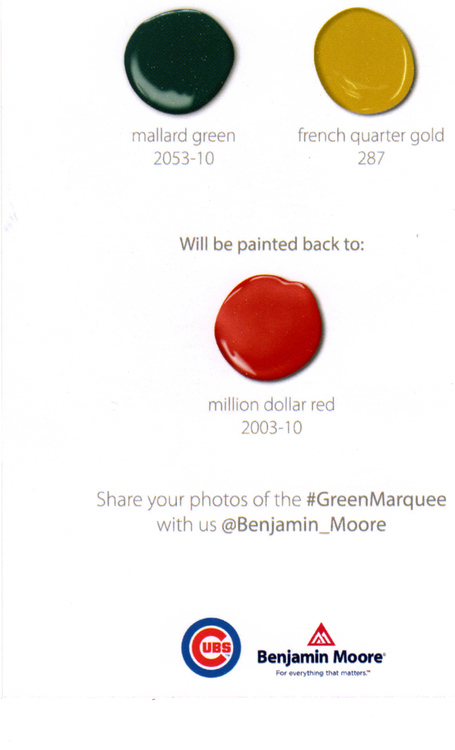