Graphs, numbers, and rankings. This can only mean one thing: BCB's Russ La Croix got to thinking during a rainy day.

Share All sharing options for: Cubs Heroes and Goats: Game 38

As an introduction to this feature, I feel it necessary to tip my hat to the inspirations for it. The first hat tip goes to the folks out at Lookout Landing who use the graphs as part of a humorous daily piece on their site. The second goes to our neighbors over at Second City Hockey who use a set of advanced statistics in their recaps. And finally, the last hat tip goes to Reese's Peanut Butter Cups, makers of one of my favorite foods, who taught me that the best thing to do with two things that you love was to mash them together.

I like to think of this piece as a "recap supplement". Al provides the meal; this piece is the after-dinner mint.

And now, I present to you a second look at Tuesday's game, using a fancy chart and tables loaded with numbers.

Here are the graphs for Game 38 (courtesy of Fangraphs): 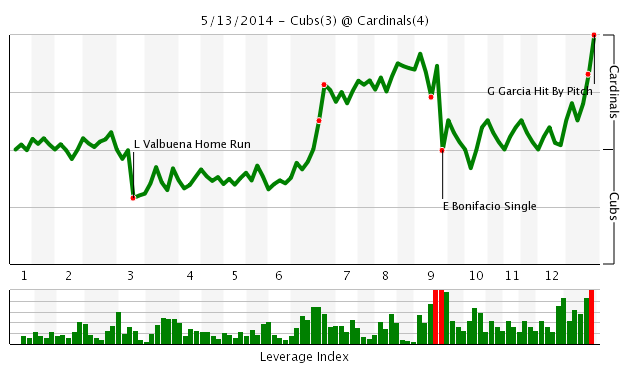 The green line represents each team's probability of winning the game at each point in time during the game.  The red dots indicate key swings in the probability.

And here are the stats for Game 38:

A stat that you see here with which you may not be familiar is WPA, which stands for Win Probability Added. It basically looks at each play of a game and determines what that play did to each team's chances to win the game. Positive scores are good; negative scores are bad. A more detailed can be found here in the Fangraphs glossary. The three highest WPA scores will be used here to determine the Three Heroes, while the three lowest WPA scores will be used to determine the Three Goats.

For Tuesday's game, the Three Heroes and Three Goats are:

Finally, there is a ranking system (completely of my design and devoid of any scientific methodology) which gives three points to the largest heroes and goats, two points to second place, and one point to third. Here's a catch-up view through the first 38 games of the season:

And on a positive note, the skies have cleared and getaway-day baseball is in the forecast. There is a chance for scattered rain later in the afternoon; with any luck it will either completely miss or at least hold off until the game is over. Keep your fingers crossed.