Brewers 4, Cubs 3: A Day Late And A Dollar Short

The Cubs lost yet another game by one run, their ninth such defeat of 2014.

Share All sharing options for: Brewers 4, Cubs 3: A Day Late And A Dollar Short

The winter that wouldn't end raised its ugly head one more (hopefully, the last!) time in the Chicago area Friday morning, depositing big snowflakes in many of the northwest suburbs and bringing the "chill rains" that the late A. Bartlett Giamatti wrote usually come in October or November. It rained steadily at Wrigley Field until about half an hour before game time, then turned into an annoying off-and-on drizzle that was just pesky enough for the umbrellas to go up every now and again.

38 degrees at game time, wind from the northeast, rain... weather more suited to hockey than baseball, and in fact, it might have been nicer the day of the 2009 NHL Winter Classic at Wrigley than it was Friday afternoon.

The Cubs began the day as if they couldn't hold on to the baseball because it was too wet, or too cold, or too... something. They committed three errors in the first three innings and that helped spot the Brewers a 4-0 lead, and with Jeff Samardzija's usual run support, you'd have been forgiven if you thought the game was over by the time the Cubs came to bat in the bottom of the second inning with that 4-0 deficit.

Give the Cubs credit. They didn't quit. In that second inning, Nate Schierholtz singled (a victory in and of itself) and Darwin Barney homered into that northeast breeze, his second homer of the season, and then Junior Lake smacked another blast into the bleachers leading off the third, and suddenly the Cubs trailed by just one run. Hope!

It was at this point that the game was actually over, because from the fourth through the ninth innings, just six men reached base, five Brewers and one Cub, and none got past second base. In fact, at one point Milwaukee starter Kyle Lohse retired 13 straight Cubs (for 14 outs, as the first of those was Welington Castillo hitting into a rally-killing double play that ended the third inning). Will Smith added to his rapidly growing relief-pitching legend by retiring the side in order in the eighth, and the rejuvenated Francisco Rodriguez posted his major-league-leading 17th save, though Starlin Castro did lead off the ninth with a single. Personally, I wouldn't have given up an out by having Chris Coghlan bunt, but bunt he did, and bunt into a force play he did, pretty much killing any chance the Cubs had in the ninth.

You can see what a lockdown bullpen can do for a team with what the Brewers did Friday afternoon. Lohse had thrown 92 pitches through seven and was breezing, but Ron Roenicke had no hesitation in going to his pen in the eighth, and their pen came through for them.

Give the Cubs' pen credit, too -- they threw four shutout innings, allowing just three hits and a walk and striking out eight. All told, Cubs pitchers struck out 14 Brewers Friday afternoon, and again, if not for the errors resulting in a pair of the four Milwaukee runs being unearned, it could have wound up a Cubs win.

Coulda, shoulda, woulda. Or as the headline reads, a favorite phrase of Jack Brickhouse's when the Cubs came up shy of victory back in the 1950s and 1960s, something that happened in this way many, many times.

Also of interest: this weird, wavy pattern mowed into the grass in left field (I was told they did it in right field, too). Why? Who knows, but it's interesting. In person, it makes it look like there are little hills in the turf: 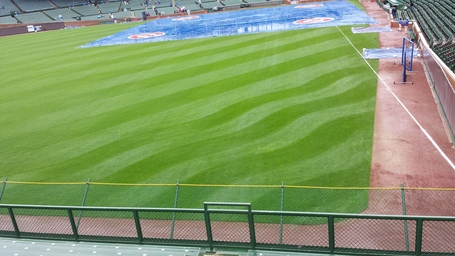 I did get an explanation of sorts as to why the Babe Ruth bobblehead instead of, say, Gabby Hartnett, who was responsible for the signature moment of the 1930s (and, probably, all of Cubs history). The Cubs apparently like to have family members of these long-ago players for first-pitch ceremonies and the seventh-inning stretch, and Babe Ruth's daughter Julia Ruth Stevens has been at Wrigley before. That's cool, but perhaps they could have found Hartnett relatives, too. In any case, there will be more 100th-anniversary celebrations two years from now when the 100th anniversary of the Cubs' first year in Wrigley will be commemorated. Perhaps then Gabby will get his recognition.

For this year's Cubs, they'll try it again Saturday afternoon against the Brewers with Edwin Jackson facing Matt Garza. Remember: bunts. Lots and lots of bunts. I did notice the Brewers spread out the shift against Anthony Rizzo Friday, and he responded with a single up the middle in his second at-bat. But if they give him (or anyone else) room to bunt against Garza..just get it done!