BCB's Danny Rockett got ripped off...

I was charged with securing a Babe Ruth 'Called Shot' bobblehead for Ann, the Las Vegas Cubs fan who has given me 14 free Cubs tickets this year… and I failed.

I left my house a few hours earlier than usual for a little pre-gaming at Salt 'N Pepper Diner with Keith, a Wrigley Field virgin. We entered the rain-soaked ballpark with ample time to receive the bobbleheads. So, with bobbleheads in tow and no intention of sitting in Ann's actual row 534 nosebleed seats on a 40-degree, blustery Mayvember day,we settled in row 202 in the right field corner. 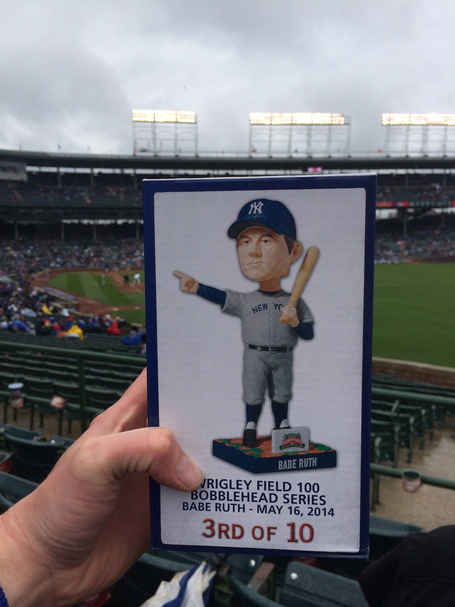 (picture sent to Ann circa 2 PM)

All of  the action in the game happened within the first three innings, and the misty air chased many Cubs faithful from the stands by the sixth inning. Keith and I moved down 10 rows because this was our view… 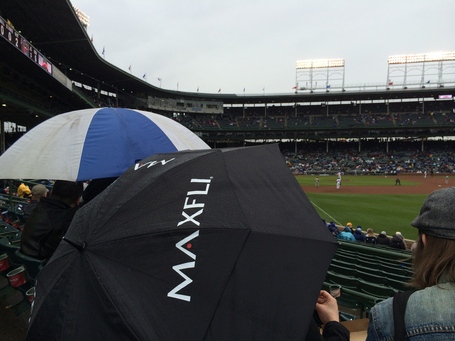 Of  course, I forgot the bobblehead at our old seats because of my distracting umbrella induced frustration!

But after one out in our closer, wetter seats, I remembered the bobblehead and retrieved it. Luckily it hadn't been swiped by a retreating fan. But it was a close call… our section had emptied in the rain.

After the game, another loss, I remembered Ann's bobblehead, and Keith and I headed over to "The Dugout",  one of the more reasonably priced establishments on Addison, and -- I know you're all going to judge me and you should, but I've been addicted for 26 years so please understand somewhat -- I went out for a smoke. Keith took off to meet his cousin Scotty of divorced Cubs Brick fame, and I chatted up the inebriates that inhabit Wrigleyville at 5 p.m. on a Friday. The Cubs crowd eventually turned into the afterwork crowd, and then to the typical Friday night bar crowd. It's a magical transformation akin to a zygote turning to an embryo, turning into a baby, turning into the type of jerk who would steal Ann's Babe Ruth called shot bobblehead while I was out feeding my addiction to nicotine.

Now granted, I was out there longer than the normal cigarette would take an average addict. I chatted and meandered. I blow-harded and debated, and I stupidly trusted the anonymous inhabitants of The Dugout to not steal my bobblehead. But someone did.

I walked back in, and after settling my tab, realized the bobblehead I placed on the floor unhidden next to the door was gone. I approached a large group of Brewers fans at the bar, one of which hoarded three Babe Ruth called shot bobbleheads  in a plastic Cubs store bag, exactly the make and model of the Cubs store bag that my Babe Ruth bobblehead was carried in. I asked pointedly to the Brew Crewers, "Hey, did you guys see the bobblehead I left right here?" The crowd looked guilty as sin. And I've watched enough Discovery ID true crime TV shows to know which of them had snagged Ann's Babe Ruth bobblehead. The one who looked guilty! The one with the bag of bobbleheads!

I lived in New York City for 18 years, and the two times I was robbed there, my nose was broken as well. But in the 1½ years I've been in Chicago, I've been robbed three times and never suffered more than the theft of a wallet, an awesome raincoat, and now a bobblehead. Hmmm…..so….

How do I know the Brewers fan stole my bobble head?

A. The guy with 3 bobbleheads simply seemed guilty and looked at his three-bobbleheaded bag when I asked if anyone saw my bobble head. Plus. He didn't say a word, when all his friends were vocal. Then again… bobblehead collectors don't talk much...

B. His friend randomly said to me that the "thief" has 3 kids.  (and now he has three bobbleheads)... as if it was a justification for his theft.

C. A Cubs fan would never steal Ann's bobblehead! Only a Brewers fan would!! Right? ... But mostly A and B.

So where have we come to as a society when we steal bobbleheads from each other?

Now, all I have is the extra Joe Tinker bobblehead that I found during the '1910's series' to send to Ann.

You think I can make Tinker point? Call a shot?

Nope. I tried. He just bobbles his head.

Or maybe just get this guy to impersonate a bobblehead at your next birthday party…..