Concessions Of A Cubs Fan: "The Cheesesteak Dog"

BCB's Danny Rockett eats Wrigley Field's "Cheesesteak Dog" so you don't have to...

Share All sharing options for: Concessions Of A Cubs Fan: "The Cheesesteak Dog"

This past weekend, the Cubs celebrated the most fitting of decades for this season's 100-year 'Bobbleheadstravaganza": The 1930s. Like our beloved team's current malaise, this epoch included the Great Depression, but there were bright spots to the decade. The 30s saw the invention of Scotch tape, stereo records, and canned beer. (If you can consider canned beer a bright spot). The Cheesesteak was also invented in Philadelphia by Pat and Harry Olivieri in the early 1930s. They began serving a popular chopped beef and onions sandwich at their hot dog stand, but according to the brothers, the sandwich didn't become a "Cheesesteak" until Cocky Joe Lorenzo added provolone cheese. Voila! The Cheesesteak was born!

So to celebrate the Cheesesteak's inception, the chefs at Chez Wrigley have concocted the "Cheesesteak Dog". 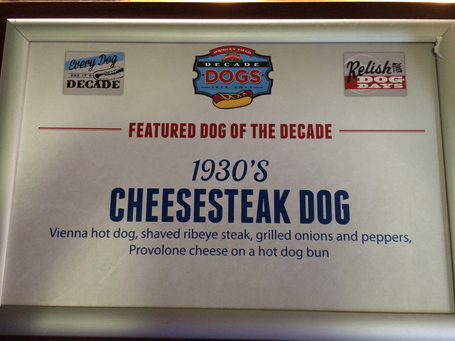 After my experience with the Reuben Dog, I was less than hopeful that this sandwich would be any good, but BCBer Joe had given me two free tickets to Saturday's game. I couldn't find a taker for the second ticket, so I ended up selling it for $5 outside of Wrigley. I immediately invested the money into the Cheesesteak Dog (plus an extra two bucks).

And after a five-minute wait for my dog, I was served this…. 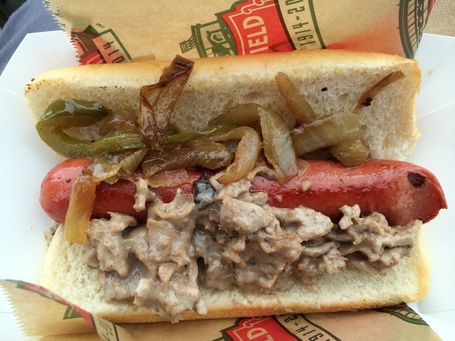 The only good thing about this culinary creation is the Vienna Beef frank itself. Apparently, the provolone aspect of this sandwich is the white smegma smeared upon the steak. And given the low quality of the "steak" in question, and the overcooked yet cold peppers and onions, I would say you'd be better off with a vendors hotdog for a couple of bucks less. Especially since the bun couldn't really handle the weight of the soupy mess.

What's that? You want a closeup?! 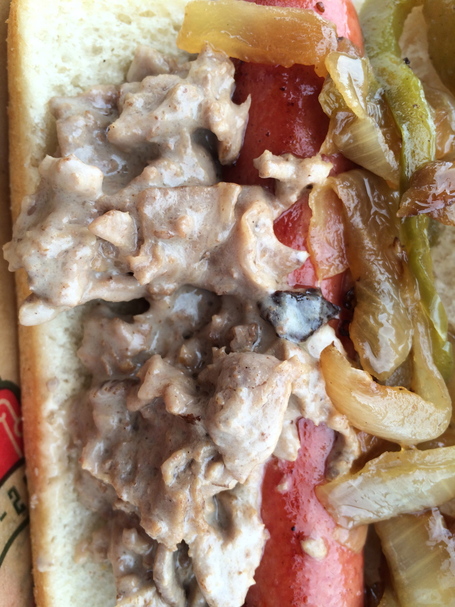 About 15 minutes after finishing my meal, my stomach began churning, but as this is a common occurrence whenever I eat anything at a baseball stadium, I can't say the Cheesesteak Dog was any better or worse when it comes to digestibility. But I can say it was bad. And definitely not worth $7.

To be fair. I've spent a fair amount of time in Philly, and Cheesesteaks aren't very good sandwiches either. They certainly don't hold a candle to Al's Hot Beef anyway. The most popular Philly Cheesesteak joints like Pat's and Gino's use cheez whiz instead of provolone! And that, my friends, is disgusting.

Either way, if the Cubs wanted to truly celebrate the decade, they'd sell this dog for what it would have cost in 1935. Forty cents. Which is about what it's worth.

Thanks again to Joe who made this lunch possible!