This one created a sleuthing assignment for me, too.

Over the weekend, I learned of another mistake in the murals posted on the Wrigley Field bleacher walls. You already know about the Charles Lindbergh photo error on a mural on the Waveland side, that the Cubs have said they'll fix.

The other error is on the Sheffield side, and I'm writing about this not just in the hope that the Cubs will fix this one, too, but because in it, the scoreboard is visible, and of course you know how much I love to figure out "Which game was that?" from scoreboard photos.

The photo above is the one of the full mural, which is supposed to depict scenes from the 1932 World Series. Here's the photo that contains the error: 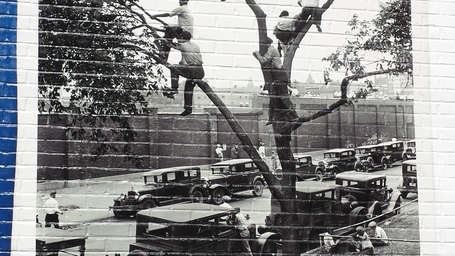 Now, even if you click on that to make a larger version, it's kind of hard to read with the bricks behind it. However, I found a full version of this photo here. Go ahead and look now.

What's the key to the mistake? Why, it's the URL itself -- the URL says "boys-in-tree-1932-world-series." And it's from the Vine Line MLB Blog, so you can see exactly where the mistake was made. The photo was probably identified as the 1932 World Series to the Cubs, and no one double checked. On the wall, there's a caption that says it was taken during the 1932 World Series. But it wasn't. 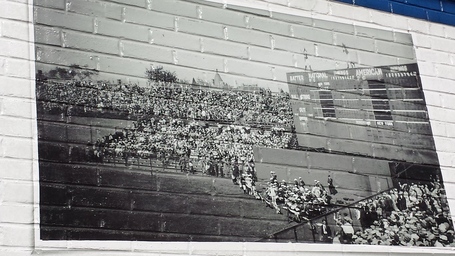 First, the scoreboard says "NEW YORK/CUBS" with all the other team names taken out -- clearly, the Yankees/Cubs World Series was the only game going on. Also, you can see temporary bleachers that were put up over Waveland Avenue. It's not shown in this photo, but I know that similar bleachers were erected over Sheffield Avenue for that World Series -- that's how the Cubs were able to cram 49,986 and 49,844 into Wrigley Field for the two 1932 Series games that were played there, far above the park's capacity of approximately 40,000 in that era.

There aren't any bleachers on Sheffield in the photo of the boys in the tree. There's your first proof that the photo couldn't have been taken during the World Series. The second proof is here: 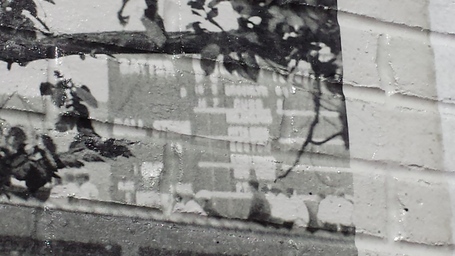 You can see all the National League teams on the scoreboard, and -- go look at the original photo from Vine Line again -- the Cubs were hosting Brooklyn. Obviously, that couldn't have been a World Series game.

So which game was it? Given only the facts above, it could have been just about any time up to the point that the current bleachers and scoreboard were built in 1937. However, there's another clue in the photo -- a visible license plate on one of the cars parked on Sheffield: 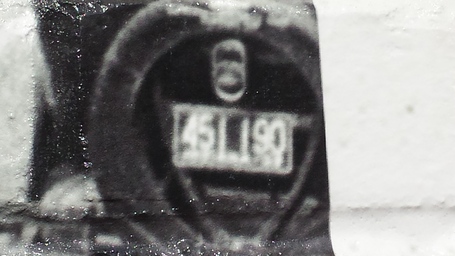 Hmmm. I looked through this page of photos of historic Illinois license plates, and it sure doesn't match 1932. It kind of looks like 1936 -- but it can't be, because the plate in the photo appears to have just two digits after the state name and no dash between the two sets of numbers, and Illinois plates in 1936 had a dash, and the full year.

Not really. The solution for this wasn't actually that hard to find. The plate in the photo is a 1932 Indiana license plate -- the numbering and lettering style is a perfect match.

So the photo was definitively taken in 1932. But when?

We can eliminate the May series for two reasons. First, the leaves on the tree in the photo are too fully grown for early May -- even in warmer years, leaves aren't usually that full by the first week of May.

The scoreboard also shows pitcher and catcher numbers. Yes, in the 1930s, since most pitchers completed all their games, the Wrigley board (both this one and the one constructed in 1937) showed starting catchers as well as starting pitchers. The Cubs didn't wear uniform numbers until June 30, 1932, as you would certainly know if you've read "Cubs By The Numbers" (seemed like a good place here for a shameless plug). That's another reason to think the photo wasn't taken in May.

The pitcher number shown for the Cubs looks like "14." That would have been Guy Bush, who wore that number in 1932. You'll note there that he wore many other numbers. Players often changed uniform numbers in those days -- the origin of the old vendor yell, "You can't tell the players without a scorecard!"

The pitcher number shown for the Dodgers is harder to read, but it could be "15." If so, that would be Hall of Famer Dazzy Vance, who wore No. 15 for the Dodgers that year, the last year he started any games for Brooklyn.

Looking more closely at the scoreboard photo, it shows the Dodgers with no runs in either the first or second inning, and the Cubs with none in the bottom of the first. Thus, it was taken in the middle of the second inning.

There is only one game that matches all those criteria: Bush vs. Vance, scoreless in the bottom of the second -- July 14, 1932. It's impossible to tell the size of the crowd from the few people shown inside the park; the boxscore says attendance was "10,000," probably an estimate, since attendance figures didn't become more reliably known until the 1940s. The Cubs won the game 4-1.

So, there you have it. The photo of the boys in the tree was taken during a Cubs/Dodgers game July 14, 1932, not during that year's World Series. It was, as always, fun to sleuth this one out. And I hope the Cubs will fix this mural error, too.